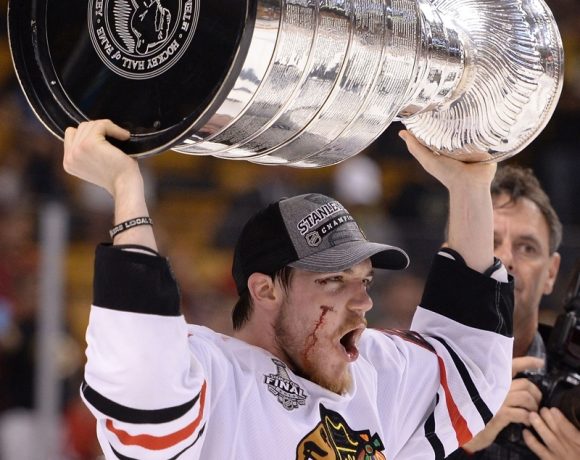 In a move that should surprise no one, Andrew Shaw called it a career at the age of 29 earlier this morning, in a move that sadly is probably a couple years overdue. After having suffeded his third major concussion in 4 years, the message of doctors finally sunk into that thick cocker spaniel skull of his, and it’s the right move for his long term health and for his young family.

Shaw arrived on the scene in the first half of the 2011-12 season as a Rockford callup who had put his time in as a fifth round pick, and immediately endeared himself to the large swath of meatball Hawk fans with a goal and a fight right away in Game 1. And while his cement head antics would keep him front and center and often detract from the team – he was always an overzealous offensive zone penalty waiting to happen – the fact of the matter is that he could contribute on all four lines, and was instrumental as a depth piece on two different cup runs, playing the style of playoff hockey that every team needs to get 16 wins, with his two famous OT contributions of the I Love Shinpads goal, and the headbutt goal that was disallowed. Of course, that same rambunctiousness led to suspensions for plowing into Mike Smith (which really, who hasn’t wanted to do?), and having a Heated Gaming Moment in throwing out a homophobic slur in 2016, which is truly a black mark on his and hockey’s reputation. To his credit, however, Shaw seemed to be truly regretful of using it, and sought to make amends by speaking with then-Hawks reporter and openly gay man Chris Hine as well as putting plenty of effort into the league’s You Can Play Initiative.

Shaw was traded to Montreal in the off season following the latter incident, and in return the Hawks received the pick they’d use to select Alex DeBrincat, so that was truly a case of the Hawks winning a trade, even if they did what they always do which is trade back for and/or re-sign players that have been here before. In his second stint over the past two years, Shaw has only played 40 total games over two interrupted seasons, and he’ll end his career having played 544 games with 247 points. It’s just unfortunate that the same style of face-first play that was the only way for him to make it to the league and stick here will ultimately be what ends his career before 30. But this is the right move for everyone involved, regardless of whether this is an actual retirement with paperwork submitted, or another LTIRetirement, which remains to be seen.

In other news today, according to many reputable sources such as Elliotte Friedman and Uncle Bob Mackenzie, NBC is pulling out of negotiations for the rights to the other half of the NHL’s American national TV package after ESPN rejoined the party a couple months ago. With NBC folding their national sports outlet NBCSN likely in an effort to push more people towards their subscription streaming service Peacock, and with ESPN paying what NBC did in the last contract negotiations for half the games, it likely seems like NBC did some cost/benefit analysis here and cut bait. And while Fox and its national network Fox Sports 1 were thought to be the other frontrunner involved, it appears to be Turner sports, whose NBA coverage on TNT is the industry standard for sports coverage both in their studio show and gameday production, and whose MLB coverage on TBS is lukewarm at best. There’s nothing concrete about anything yet with no official announcements being made, but it would stand to reason that plenty of NBC’s analysts are now going to be looking for new homes, and it would go a long way for Turner to endear itself to the hockey consuming public to bring on some of the youngish and diverse faces at NBC like our gorgeous boy Patrick Sharp and Anson Carter, but also by telling Regis “Pierre” McGuire to finally go do one, as there is literally no one (the audience, the players, his co-workers) who can stand his bullshit, but time will tell. Or just Ernie, Kenny, Chuck, and Shaq do the NHL show too.