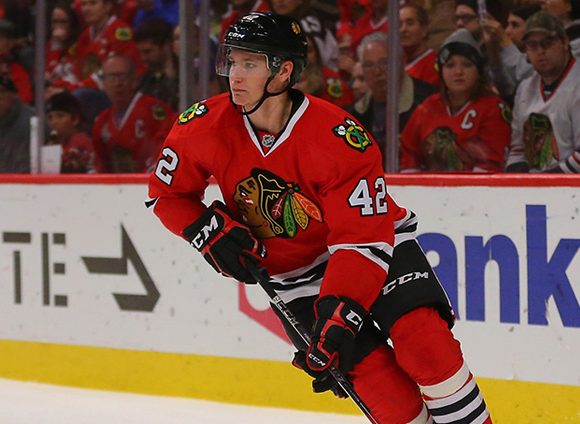 You Love This Game. It Says Everything You Want To Say

It’s hard to imagine how last night could have been a better illustration of the things the Hawks defense does well and the things it doesn’t do well and how it’s kind of mismatched for the task at hand. It also was something of an example about how it’s being let down by the forwards in front of it, and how those forwards bail them out.

Here’s what we know about the Hawks’ defense right now. It has maybe one top-pairing player, and that’s not a certain (Keith). It has three players that are probably no more than third-pairing bum-slayers (Forsling, Franson, Seabrook). It has two players either in their first or second year that are still working out the kinks (Rutta, Forsling). It has one player that Q just won’t let be anything, really (Kempny). And it has one player who’s probably a second-pairing player learning a new system, but the Hawks need him to become a top pairing player sharpish while shuffling him from one side to the other (Murphy). As you can see, it’s a mess.

Of late, Q has come to trust (somewhat) Cody Franson with Duncan Keith. If you squint, you see why. He’s big, he’s a good counter to Keith’s all-over game, and when he has the puck he’s good with it. But here’s the problem. Watch Franson on this one, especially on the replay:

But he can also do this:

That’s a one-timer off a bouncing puck off the boards not anywhere near his wheelhouse that he gets to the net. And really, he’s just about the only Hawks d-man who can do that. Certainly the only right-handed one, as Seabrook would have probably fallen over these days. The Hawks need that on the power play for sure, and they need that dash at even-strength as well from that side.

The Hawks are also being held back at times due to a learning curve.

Here, the Hawks do mostly everything right, actually. Murphy is within his rights to try and jump down low and get involved, and the Hawks want that out of him. Hartman actually covers his point correctly, but doesn’t read the shot going wide right and lets the puck past him and then Nash has a step on Murphy. Murphy actually does pretty well in forcing Nash on his backhand and wide, and this is one Crow would like back. But again, it’s an example of the Hawks d not really having the footspeed to play the hyper-aggressive game they have, or at least still trying to reprogram some players on how to do it.

Gustav Forsling was excellent last night, and yet still started over 60% of his shifts outside of the offensive zone. And his partner, Jan Rutta, was beyond awful. And this is the kind of thing the Hawks are just going to have to live with for a while.

Q won’t like it, because the one time he tried it the Hawks gave up seven, but dressing seven d-men for a while is probably the best option. Because each of the d-men have something the Hawks need and each of them also have a glaring weakness that needs to be covered up. Kempny is the most mobile d-man behind Keith and Forsling (and it’s closer with Forsling than you think). But he is good for one or two boners per game that need to be covered. Keith can’t both take on top lines and push the play offensively, which means you need someone else to do whichever he’s not. But from the left side, only Forsling can be a puck-mover behind Keith if Kempny isn’t playing. If someone else needs to take top pairing assignments defensively, who is it? I’d give Murphy a run, but with whom? It sure feels like Forsling is being groomed for that, but that’s a big risk. Franson is slow and defensively wonky, but his offensive skills and right-handed shot are needed on the power play at least. Rutta is defensively more sound than Franson but doesn’t have the offensive polish, so he can’t do all of those things and his learning curve is starting to look pretty steep anyway.

And Seabrook…um…. well, I’ll get back to you on that.

As you can see, it’s a rough puzzle to try and fix, as there don’t seem to be any corner pieces. The Hawks haven’t fashioned any yet, that’s for sure.