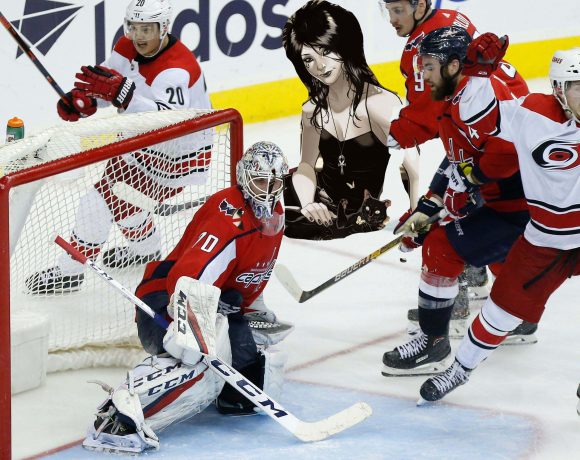 I would say that the Washington Capitals learned all the wrong lessons from winning their first Cup last spring, but then what can you learn when you spend the next eight months riding the creature? You’ve probably learned some lessons while bass-ackwards, but they were learned the wrong way and could have been absorbed in much more efficient and cleanly ways.

So there the Caps were, kind of like a Diet ’07 Ducks, convinced their constant penis-measuring and bicep-flexing was the reason they had a parade last June. Running around trying to hit everything, as if trying to impersonate a super collider. And there they were trying to hold up T.J. Oshie as some sort of martyr. He broke his collarbone, he wasn’t the dude from the “One” video. And it’s hard to take a team’s claims of a dirty or iffy hit seriously when they employ Tom Wilson. It’s like that one friend you have who made out with someone truly objectionable at closing time at the bar once. It’s a response you always have in the back pocket.

Of course it goes beyond that with the Caps. They nearly won this series on the back of their premier and special amount of scoring. That’s how they won the Cup last year, behind Ovie and Backstrom and Kuznetsov and Carlson. But after a summer and more of listening to professional belchers like Mike Milbury and Keith Jones claim that their path past the Lightning had to do with scaring and beating them up, they clearly bought into the bullshit and started growling like a five-year-old trying to be scary. It was almost an adorable sort of growling.

So yeah, Ovie got to punch a child unconscious while his teammates applauded, a super great look for the league. And hey, if he hadn’t his team might have only gotten one shot in the final 40 minutes of that game instead of the glorious two he lifted them to through his “leadership.” He might have gotten into Dougie Hamilton’s head, but Justin Faulk and Jaccob Slavin were more than happen to just glide into the space the Caps had vacated while trying to be the meteor from “Armageddon.”

It’s not really Ovechkin’s fault, of course. He’s an intense guy. He’s also the greatest scorer of all-time, and should focus on that. And yet what gets more replays? His goal in Game 6 which was a thing of beauty, his assist in Game 7 which was the same, or him trash talking the Canes bench after he missed a hit by five feet? It’s the way we live, apparently. Also his chicken impression isn’t much more than a tick above the Bluths.

Still, the Caps carried on a noble tradition of the previous Cup champs losing in seven games. The Wings did it, the Penguins did it the first time, the Hawks did it the first, second, and third time, so did the Bruins. The Penguins of last year lost in a Game 6 overtime, which is pretty close. Seems that’s how you go out on your shields these days. Maybe they can raise a banner for that next to their Winter Classic ’15 one.

The Caps have such a strange legacy. They’ve won their division four straight years and five of the last seven, which is a rare accomplishment. It should be celebrated. And yet it feels like they just kept winning a division the Penguins can’t locate enough fucks to give to win it and everyone else is too helpless to take. It’s the division crown the Caps keep finding in the alley.

In the end, last year’s run will be the outlier to the true nature of the Caps. They don’t go past the second round. It’s just not something that happens. They find a way to spit it before eight wins. There won’t come another season where the true power is simply too tired, and the rest of the rabble incapable to keep them in their natural habitat. The Caps win last year felt like the first time a child claims he’ll walk way from his/her parents. With every step they turn around to see if anyone will stop them, and you let them go knowing they’ll end up back where they should with a new sense of bravery. They don’t have it in them to stay out there though.

Water seeks its own level. The Caps win the division and then go away soon after. It’s how things are. It’s how they will be. We may spin off our axis every so often, but always return. Doesn’t it feel better this way? Comfortable, right?

Too bad T.J. Oshie died for nothing.