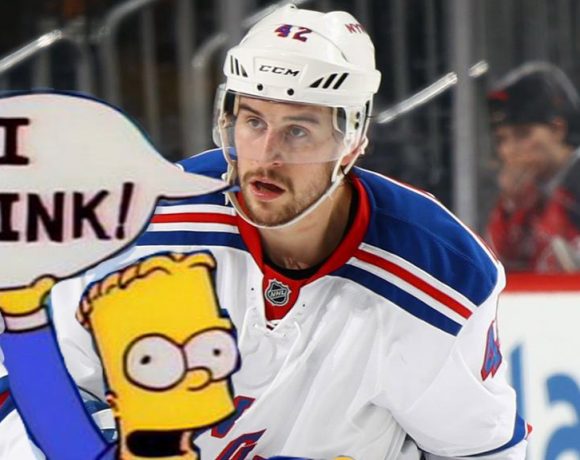 Generally we reserve this section for a pest, or goon, or someone who just kills the Hawks. Rarely do we allot this to someone whose mere presence we find objectionable. The fact that he is just there, no matter what he does, leaves us with a look on our face akin to whenever we’re told vanilla ice cream is more popular than chocolate.

Brendan Smith will make $4.3 million this year to play NHL hockey. You, dear reader, will not. And believe us when we tell you that you aren’t that much less qualified to do so than he is.

Brendan Smith sucks. He has always sucked. And really, perhaps we should love him, because without his 2013 Game 6 Tour De What The Fuck in the 3rd period, the Hawks might not come back against the Wings that year. But thankfully, because Smith was wandering around his own zone like he got into the devil ether, the Hawks did. The highlight of course was keeping the Hawks onside for Bickell’s go-ahead goal.

But that’s always been Smith. And yet he keeps getting work. The Rangers gave up two high draft picks to acquire his services last year. And then they signed him to this deal for the next four years. Signing Brendan Smith to do anything for four years other than to clean the dressing room is a fireable offense, or at least it  should be.

This is how much Red Wings glow still exists. Anyone with a handful of functioning neurons knows now that Ken Holland is actually an idiot who just happened to win the raffle a couple times with late-round picks and a wheelbarrow of Mike Illitch’s money. So any player that is a draft pick of that guy should come with huge scrutiny. But no, there are still a lot of GMs who think he must be a stud and the Wings just have too many good players for him to find the lineup.

Smith has no positioning. He has no ass. His passing is barely ok. Sure, he can skate, but who the fuck cares when it’s never in any specific direction? He’s a puck-moving defenseman who doesn’t move the puck or play defense. Great.

And if the Hawks can’t directly benefit from his presence anymore, then it’s just upsetting. Maybe the worst part of the Wings fleeing to the East was that the Hawks didn’t get a handful of points simply because Smith was out there performing in a chorus line only he could hear. Damn you, Red Wings.