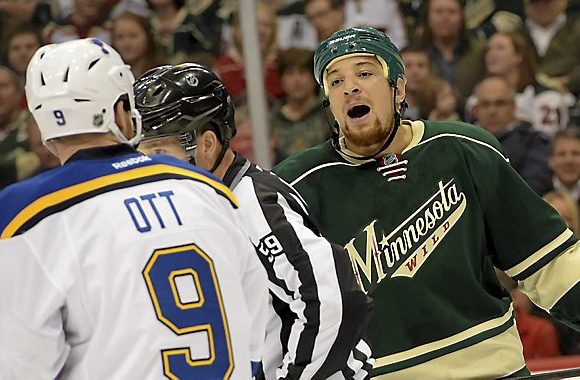 Game #55 – Hawks vs. Wild Douchebag Du Jour: We Were Finally Right About Something

The first time we wrote this section about a player on the Wild this season, it was Chris Stewart. We don’t like to repeat ourselves, but we don’t get to take a victory lap very often. Back then, Stewart was in the middle of a goal-scoring binge based on a stupid shooting percentage. And of course, there were plenty of stories about how Stewart had “turned a new leaf” and “was a new player” instead of the same dolt that he’s always been who just happened to see goalies waving at his shots slightly more often than they did in the past.

Since October, Stewart has two goals. He’s played three games in the past month, mostly being a healthy scratch now that the Wild are getting back to fully healthy at forward. Because that’s what he is.

We’ve dealt with this locally, of course. How many stories did you see in the season’s first two months about Tommy Wingels and Lance Bouma just because they goofed a couple goals, even though every other marker indicated they were the same doofi they’d been their whole careers? Richard Panik, anyone?

This is another thing that seems unique to hockey. In baseball when some punter car-accidents his way to 10 homers in a month, everyone points to BABIP or fly ball rate or luck or might even start whispering about PEDs, though that isn’t really fair. Everyone knows that once the plate-appearances pile up, everything will almost certainly flatten out. Unless you’re Micah Hoffpauir and there are still Cubs fans who think he’d have been better than Anthony Rizzo.

Stewart is the same chucklehead that even the Blues or Sabres didn’t want much to do with. Maybe next time some idiot finds the net more than you’d expect in October, local scribes won’t suddenly be voting him Comeback Player Of The Year, an award hockey doesn’t even have.