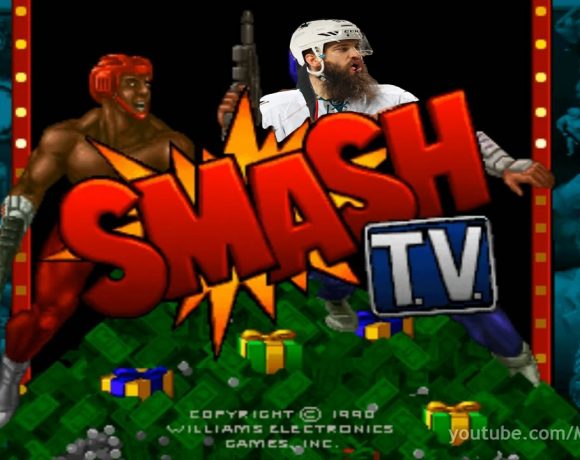 Brent Burns is crazy. You knew this. You’ve seen the clothes and the beard, and it doesn’t really appear to be an act. Sure, it’s tailored for the cameras and Iphones, but one gets the impression he’d be this way anyway if no one was watching. Hockey has just given him a bigger platform.

Brent Burns is also crazy on the ice. One of the most remarkable statistics of this year is that Brent Burns, a defenseman mind you, leads the league in attempts per 60 at even strength. He’s tied with Vladimir Tarasenko. He averages 22.3 attempts per 60 minutes. You have to go down to 11th to find the next d-man, which is Yohann Auvitu. To find the next d-man who actually matters, you have to go all the way down to 37th for Johnny Boychuk. And he’s at 16.3 attempts per 60. Again, this is at even-strength. Again, this is a defenseman.

And this is not unusual for Burns. Burns led the league last year in attempts per 60. And again, you’d need a telescope to find the next d-man on the list. Burns was fifth the year before that. And this season he’s averaging more attempts than he ever has.

While it obviously doesn’t quite connect that if you lead in attempts you will score a lot, Burns’s uniqueness is what marks him out. He’s headed for another 60+ point season from the back, so you can hardly argue with the results. And it’s not as if Burns is just firing to fire. Burns leads all d-men in shots-on-goal, and by some distance. He has 247, over four per game. The next d-man on the list is Roman Josi at 202. It was the case last year, when Burns led all d-men in shots by nearly 100! Burns already has the first and fourth most shots by a blue-liner in a season, and if he doesn’t get hurt and continues at this pace this season will probably rank in the top three or four as well.

While it looks like Burns’s production has dropped off, and it has, it can be mostly blamed on a 4% shooting-percentage overall and 2.3% at even-strength. His career shooting-percentage would see him with 17 goals instead of the 10 he has now, and the chances he’s getting are of the same quality.

It’s such a unique weapon. Given how offense is produced these days, and how teams defend, if you have a d-man who can open himself up for shots this much you create all that furor in front of the net that result in most of the goals scored now. It’s not much of a shocked that all of one of Joe Pavelski’s goals have come with Brent Burns on the ice, given his usual proximity to the net.

Sadly, Burns may soon be toiling in obscurity if he isn’t already. We know he’s paid $8 million until the universe explodes. And what happens when Burns can’t get these shots off at this rate anymore? Burns is 32, and the fact that he can do this even now is really astonishing. You’d have to think in the next two or three years, the Sharks would have to find a way to get him into a bum-slaying role where he could still shoot this much. We know the end can come quick for mobile d-men.

The Sharks have all of Thornton, Couture, and Pavelski with expiring contracts this year or next. Burns is going to be around for the next iteration of the Sharks when they’re competitive. What he’ll be then is anyone’s guess. For now, he’s truly a phenomena.