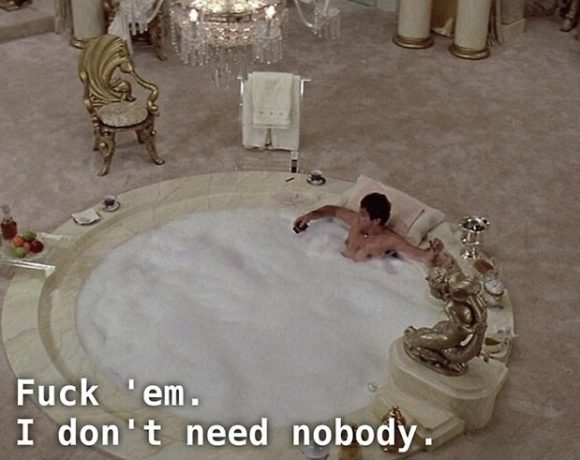 Once again, this publication was right in our analysis.

The Blackhawks played like dogshit to start this season off, and if it were up to any of us the coach would’ve been fired two days ago. Perhaps you were at least trying to hope that the Hawks would be somewhat watchable coming out of the gate this year, and with the players they added that’s not a lot to ask for. And yet here we are with some really ugly losses to start this season off. For those who channeled their inner Tony Montana and said to hell with this team before the season even started…good move on your part.

Once the puck finally dropped fifteen minutes after the game’s scheduled start time, things went just about as expected for the men of four feathers. By all logic this team should be much better than last year’s since we acquired two players in blockbuster trades and theoretically strengthened the defense. But no, instead we watched the Hawks defense be non-existent, with giveaways and a failing System everywhere you looked. Jake McCabe tripped over Tyler Johnson to lead to an Avalanche giveaway that scored the first goal. Minutes later, Seth Jones gave the puck away to Bowen Byram which led directly to a softie goal by Marc-Andre Fleury that can also be partially blamed on Calvin de Haan for screening his own goaltender. Fleury very noticeably got angrier and angrier with every dipshit goal scored against him, and Jones posted a -2 and had some horrifically defensive plays all throughout this game, in case you were wondering—one of which happened just a few minutes after the second goal when Gabriel Landeskog stole the puck from DeBrincat and set up Byram for his first NHL tally.

The Hawks were able to score two goals in this one despite getting completely clocked in possession for the entirety of the first period. And the only reason why the Hawks had 50+ CF% in the second and third periods was thanks to the Avalanche very obviously taking their foot off the gas once they secured their Most Dangerous Lead. Kirby Dach had a few really good chances he couldn’t finish, which he should definitely straighten out, and then he got plastered by Landeskog in the 3rd period in an illegal hit that probably should’ve seen a longer suspension. Don’t be fooled by the score, however, because this team looked horrendous and could barely get out of their zone—a trend that will continue, as you see below. Oh, and did we mention Nathan MacKinnon wasn’t even playing?

Kevin Lankinen started this one, and unlike Fleury he’s seen this shit before and isn’t in for a culture shock regarding how terrible The System is around here. And as usual, the defense ended up hanging him out to dry on a myriad of goals. The Hawks were almost immediately trailing in this one thanks to Jake McCabe getting outmuscled by multiple Devils, which was…special to watch. But a sweet pass from Kane to the Cat was able to tie things up on a powerplay opportunity (the only way this God-forsaken team can score goals under this coaching staff).

Jack Hughes spin-o-rama’d a goal and then Kevin Lankinen let in a tough one midway through the third to make things an even more uphill battle for the Hawks. Somehow we were able to score two with four minutes left in the game, thanks of course to a Blackhawk powerplay and a Hawks empty net that put an extra man on the ice. (See the scoring pattern?) The good news is that Seth Jones wasn’t as atrocious for this game, helping to keep the puck in on the tying goal and keep the play alive. However, it was Jack Hughes with a highlight-reel overtime goal reminiscent of the younger, not-injured Kane of yore that ended this game with another Blackhawk loss.

This is genuinely the most embarrassing game of Blackhawks hockey I’ve had the mispleasure to watch in a very long time. (Ever?) Poor Fleury, in his return to Pittsburgh that should’ve been a good experience for him, ended his start so quickly, horrifically and embarrassingly that I just had to turn this game off for a while. The Hawks, who ONCE AGAIN should’ve lucked out with their opponent’s best players in Crosby and Malkin out this game, still let this Penguins team skate circles around them. For the second game in a row the Hawks allowed a goal just seconds in, on the opponent’s first shot of the game, a goal Fleury likely should’ve had. The second goal was a second Fleury fuck-up, as he traveled to get a loose puck behind his net and wasn’t able to get a handle on it quickly enough, letting Drew O’Connor stick it right in an open net. A third goal from the same fucking bottom-six line continued to crush Fleury’s confidence, and less than a minute later the defensive System left him out to dry with one more goal against to send Fleury packing.

Fleury was yanked to a chorus of boos, both because Fleury is a Penguin GOAT and also because it must be so much fun to pillage a team like this and get four goals in the first twelve minutes of a game. Without Crosby and Malkin. A (powerplay) Kane one-timer and a pretty nifty Dach goal in the 3rd accounted for the two Hawks goals, in case it matters to you at all. Lankinen allowed one more Penguin goal because he couldn’t control a rebound that ended up going off Murphy’s skate and in the net, a perfect summation of how well The System is working so far.

Finally, Kane’s secret injury seems more than just a “nagging” one to me. Why didn’t they figure that out in the offseason? Even a surgery that puts him out the first part of the season would be preferable to what I’m seeing now. And yet he’s still the points leader on this team by a mile! I need a Tylenol.

The clown show never ends, as the Hawks look to face off against the Islanders, Canucks, and Scum this week. Meanwhile, the front office has announced God-like figure Marian Hossa will return to be honored on November 9th in order to sell as many tickets as they can to this clown show, which the team will probably lose to the Penguins again. (They would honor him more by letting him just stay home in Slovakia, poor guy.) Coach Bargain Bin Rivers Cuomo will be booed to my heart’s content in tomorrow’s opener, and hopefully by the next wrap we have a new coach, even if it’s just Marc Crawford. God save us all.