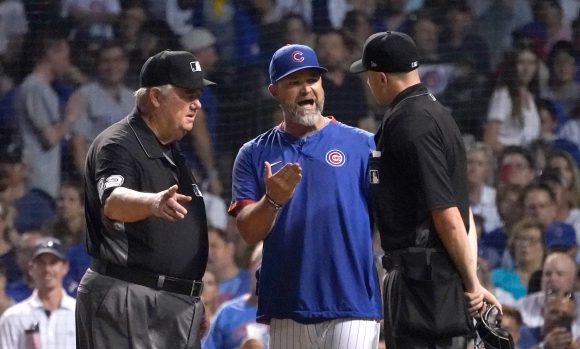 It’s bad, folks. The team is not good; despite ending their double-digit losing streak on Wednesday, the Cubs got beat down every other game, including getting blanked last night 8-0. Every facet of the team is now somehow to blame, from the starting pitching, to the streaky offense, to the imperfect defense, to scraping the bottom of the barrel with catchers available in the system so Contreras can have a day off, to the bullpen finally wearing out.

Jed Hoyer said yesterday he’s been taking calls to sell at the deadline. Brace yourselves, everyone: a fire sale is coming.

I’ve spent the last week-plus talking quite poorly about this team, as you know if you too subject yourself to too much inconsistent, crappy baseball. Perhaps you too felt a flicker of hope when, in the bottom of the 1st inning, the Cubs were able to load the bases thanks to two walks and a single by Anthony Rizzo after only 1 out. However, we came back to reality after watching both Patrick Wisdom and Joc Pederson get struck out to strand all three baserunners. It was a sign of things to come.

The things to come were just more of the same. The Phillies tied the game a half-inning later, and the Cubs were able to score in the bottom of the 3rd again, thanks to a Kris Bryant single and a Javy Baez double. Once again, the Cubs would score all their runs in the first few innings of the game and then proceed to collapse late in the game, a sign that the bullpen is exhausted.

This was Zach Davies’ start, and he allowed two of the runs early. He also allowed four hits and two walks in only 5.0 innings pitched. Both his runs were home runs, but the numbers still aren’t pretty.

Rex Brothers allowed two more Phillies runs to start the 6th inning. He only pitched a third of the inning, and we got to watch Rossy get ejected after that walk was called, arguing balls and strikes with the umpire in a show of frustration not usually seen from him. It wouldn’t help to rally the offense by any means, of course. For the rest of the game the Cubs only had two singles and a Baez solo home run. Meanwhile, the Phillies put up six more runs in the 8th and three more in the 9th, absolutely lighting up Adam Morgan to the point where he allowed three runs without even a single out. Kohl Stewart threw the rest of the inning while allowing three runs and a walk, and we got to watch Eric Sogard pitch for the third time this year, which becomes more of a disgrace every time I have to watch it.

The time to part ways from Jake Arrieta has long since passed, sad as it may be. But loading the bases in the 1st inning, with no outs, and allowing a grand slam to put this team in the hole to start out the game is just unacceptable. Trevor Williams was activated from the IR today, finally recovered from his appendix surgery, and at this point even he seems like a better option.

The Phillies were able to score again in the 2nd inning after Joc Pederson committed an incredible two errors on a single play, dropping the ball, allowing it to bounce away and off his shoe and dropping it a SECOND TIME before throwing it to Sergio Alcantara at second base. Of course, the runner was safe. A ball hit to him just a few batters later resulted in yet another bases-loaded situation, and this time Ian Happ wanted to get in on the errorpalooza, unable to properly field a hit to center field, resulting in yet another runner scoring.

By this time it was 7-0 Phillies. In the 3rd inning, a Cubs rally finally ensued to let everyone know we weren’t watching a bunch of lifeless bodies out on the field. It started with the bottom of the lineup, too, as Alcantara and Rafael Ortega both hit singles. Pederson’s offensive attempts to make up for his defensive blunders somewhat succeeded when he doubled to score a run. Kris Bryant singled as well and scored a second runner — good thing he’ll be gone at the deadline, am I right? Baez was so close to a three-run homer, but a sacrifice fly to make it 7-3 is better than nothing in this situation.

The Phillies scored two more runs in the 4th inning, in which we saw Trevor Williams come out to the mound. He pitched longer than anyone on the mound for the Cubs, at 3.2 innings. However, he allowed seven runs total, just as much as Arrieta, so I guess scratch him being a better option. Pitching’s just not good.

The Cubs had a measly solo home run in the 6th thanks to Baez again, but just a half-inning later Williams’s collapse of two singles, a fielding error and a home run this inning made it 12-4 Phillies. Bryce Harper immediately homered off of his replacement, Dan Winkler. The Cubs were able to string some offense and hits together for the last few innings, with a slew of singles, doubles and a pair of homers from Baez and backup-backup-backup catcher Robinson Chirinos. Despite scoring 6 runs in the last 3 innings, the hole the Cubs dug themselves into in the first two thirds of the game was insurmountable. Surprised?

The Cubs finally won a game, which is technically progress. They did it thanks to the help of Alec Mills, who pitched five scoreless innings against the Phillies, allowing only 2 hits and 1 walk during those innings, before tiring out in the 6th and allowing a single, a double and a home run to score three batters.

Thanks in part to the pitching, the Cubs were able to get going offensively and stay afloat. They scored three runs in the 1st inning off of four singles and a fielding error by the Phillies. They scored two more runs in the 2nd inning after two singles and a triple by Anthony Rizzo. Although the bats slowed down in the middle of the game, the Cubs were able to answer to the Phillies’ three-run 6th inning with three runs of their own at the bottom of the inning. It was Patrick Wisdom with two RBIs in that inning who scored Ian Happ and Joc Pederson; Pederson’s single scored Nico Hoerner, who singled to start off the inning.

The Cubs are a little banged up, what with Sogard on the IL and Baez getting benched amid a hot offensive streak because of his finger again. Kris Bryant left this game with hamstring tightness, also, but Wisdom replacing him ended up being not too shabby. Will an injury now plummet his trade value, however? You know the Rickettses are worried.

The team came through with a win despite the shabby lineup. Hoerner was in good company with Rizzo and Pederson; all three had two hits on the night. Rafael Ortega, known for getting on base in pinch-hitting situations, had a rough go of it with three strikeouts, but other than that everyone seemed okay. The bullpen of Rex Brothers, Andrew Chafin and Craig Kimbrel gave up no runs, of course, and only one hit to close out the game effectively.

Alzolay did throw some good pitches last night, getting five strikeouts and only one walk in five innings. Unfortunately, he’s still bleeding hits, with five in this start, leading to four runs by the Phillies. He was at first able to keep the damage down to a minimum, allowing a run in the 2nd and 3rd innings, giving the offense lots of time to score runs of any caliber. By the 5th inning, though, he gave up a single and a home run, and without the Cubs scoring any runs it seemed all but over by that point.

Good thing Cory Abbott is here to save the day in the bullpen! He pitched the 6th without allowing any runs mostly thanks to the fielding behind him not committing an error. He was able to get out of the inning in a bases loaded situation but would not be so lucky in the 7th. He allowed a single, a home run, a double and another home run to give the Phillies a commanding 8-0 lead that would stay that way the rest of the game.

I don’t even want to talk about the offense, do you? The Cubs only had five hits; I’d say they weren’t coming from their big guns but the only “core” players playing last night were Rizzo and Heyward. The team left 12 runners on base, but only two of them ever made it to scoring position. It was an ugly game to end an ugly series, one that cemented the fact that Jed Hoyer is going to be selling this team for parts, and stat.

Nothing matters anymore, so why not play the Cardinals this weekend? They are exactly tied with us in the standings except they’ve won six of their last ten as opposed to us only winning one. It’s going to be an ugly series by every stretch of the imagination; watch only if you dare, but as always, go Cubs go!