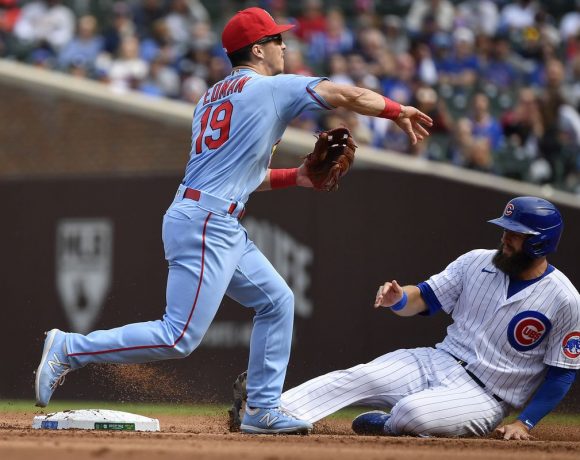 Not only did this Cubs team get crushed in a four-game series against the Cardinals, a hated rival, but the Cardinals won their franchise-record 16th game in a row while doing it and all but officially ending the NL wild card race, as now the closest teams behind them for the second spot are 5.5-6 games back.

There’s not a lot of good to report, especially considering Nico Hoerner continues to be injured, sitting out the last two games of this series due to “general soreness.” Wisdom was out for the final game, as well, with wrist soreness. Not that any of it matters, of course.

Another Justin Steele start for this one, and another Justin Steele loss. He pitched five of the seven innings for the Cubs, dueling for much of the game with the Cardinals’ starter, J.A. Happ. J.A. won out on this one, with Steele allowing a two-run dinger in the 3rd inning and two more dingers in the 5th inning to make it 6-0 Cardinals. Seven hits, two walks and five strikeouts in five innings—it could be better.

The Cubs were snakebitten for the first half of this one offensively, even loading the bases in the 4th when they were only down two runs, but were never able to make anything happen, with strikeouts and double-plays making things hard. By the 6th inning, after two more Cardinals runs given up by Tommy Nance, the Cubs went on a bit of a rally, but rallies lack in meaning if you’re down eight runs. Nevertheless, two walks, a homer, a single and two doubles and suddenly the loss looked a lot less brutal on the scoreboard. But trust me, it was pretty brutal if you watched the whole way through.

It’s a waste of my time to write about this game and it would be a waste of your time to read about it.

At least runs were scored in three separate innings in this 8-5 loss as opposed to the previous 8-5 loss. Once again, the Cards scored first with a solo dinger to right field. Then two singles, a double and a walk in the 3rd gave the Cubs their first lead in the entire series, which they returned quickly to the Cardinals in the next half-inning, as starter Adrian Sampson gave up his second homer of the game, this time to Tyler O’Neill.

The 4th inning featured a bit of déjà vu from the 3rd inning, as Willson Contreras and Ian Happ scored two more runners on their own. This time the Cubs bombarded St. Louis with three singles, a sac bunt and a walk in the 4th to go up 4-2, where the score stayed for two innings.

Sampson was taken out at the start of the 7th inning for Codi Heuer, who ended up being the losing pitcher for the Cubs when he gave up four hits in a row, tying the game. Scott F-Ross replaced him and gave up a sac fly on his third pitch of the game, giving the Cards a lead they would not give back. Tommy Nance gave up three more runs on the mound in the 9th inning, and though Happ hit a solo dinger to center field at the bottom of the 9th, it wasn’t enough for a Cubs comeback. Shocking, I know.

Another game where the Cubs were out ahead with a lead and blew it. Granted this was a 2-1 lead against a team on a 15-game winning streak, but you did hope the Cubs would hold on.

In the 3rd inning, Paul Goldschmidt hit a solo homer to put the Cardinals in front, but an inning later in the 4th showed the Cubs’ only meaningful burst of offense this game after a walk, a single, a double by Sergio Alcantara and a sac fly by David Bote put the Cubs ahead 2-1.

The Cardinals hit another solo homer in the 8th inning off Rowan Wick, meaning it all came down to the 9th inning, where Codi Heuer became the losing pitcher for the second game in a row. He couldn’t find a strike, walking the first batter on four pitches, allowing a single in his next pitch, allowing a sacrifice bunt, intentionally walking Paul Goldschmidt to load the bases, and then a wild pitch was thrown in order to score the Cardinals’ go-ahead run. Then a single was hit to Heuer, which he dropped on the ground in an embarrassing error where the Cards scored another runner.

The Cubs were able to get two men on in the bottom of the 9th inning for Frank Schwindel to come up to bat, but an infield fly rule ruled him out and ended up not allowing the Cardinals to throw out Austin Romine at 3rd base. The Cardinals were so pissed about this that their manager was ejected yelling about it, but it ended up not mattering as Ian Happ struck out on three pitches to end the game. That’s Cub.

The Cubs’ final midweek series is against the Pirates starting tonight. The Pirates suck. The Cubs suck. It will be some low-quality baseball. But maybe both teams can make it an interesting series instead of a one-sided shellacking. See you then. Go Cubs go!