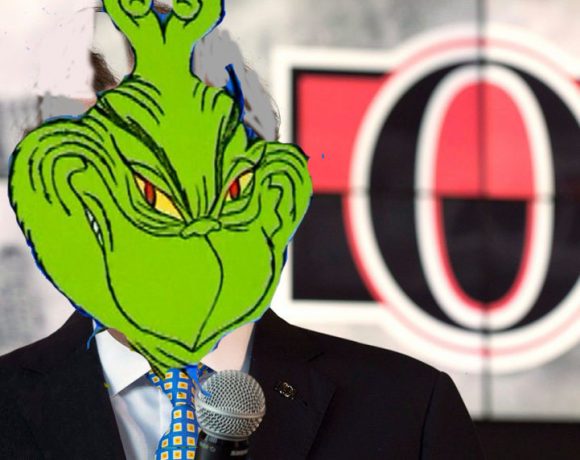 Most sports fans long ago accepted that whoever owns their favorite team is at best, a massive prick. It almost comes with the territory of being so rich you can buy a plaything that’s worth several hundred million dollars. Basically, if the owner of your favorite team remains just at the level of “prick,” and not “destructive sociopath,” “maniacal egomaniac hellbent on glorifying himself,  or “downright evil,” that’s about as close to a win as you can get.

For Senators fans, this is a battle they’ve lost.

It’s hard to know where to start with Melnyk, We could start with the lawsuit filed against him in 2008 by the SEC for deceiving investors and fraud. His partner settled that one. Melnyk himself was banned by the Canadian SEC from senior roles at publicly traded companies for five years. Boy, doesn’t this seem like a guy you’d want in the NHL!

As far as his ownership reign in Ottawa goes, Melnyk has been crying poor since the moment he stepped in the door. Granted, Ottawa faces some more challenges than other Canadian franchises. Because the main industry there is government, there isn’t nearly the the opportunities for corporate sponsorship and partnerships that there is everywhere else. That is a hinderance.

But that’s one thing. Coming out and threatening your fans with, “Come to our games or I’ll move this team,” on the night before the Senators’ first ever outdoor game is another. Which is what Melnyk did last year.

This of course is after years of stripping the Sens down due to financial concerns, even though Sens fans have filled that building for years. The Senators had one of the thinnest scouting networks around because of this, and are only just now correcting that. Pierre Dorion didn’t have an assistant GM last year. It’s why you haven’t seen them chase any free agent of note or ever considering paying Kyle Turris last year and a host of others.

Oh, and there was this little ditty about him publicly begging for a liver. Remember, he did that and then threatened to move the team away from these people a mere two years later. That’s just precious.

This past summer has been the nadir for the Senators. An assistant GM being fired because he couldn’t keep his hands off an underage bus-driver. The Hoffman-Karlsson spat. And then of course having to deal perhaps the franchise’s second-most beloved player in Erik Karlsson for nothing. And we wonder why Daniel Alfredsson hightailed it to Detroit? Wonder no more!

And if you missed the video that Melnyk made Mark Borowiecki, for some reason, interview him for so he could defend himself without taking actual questions from real media, check it out if you’re a true fan of the theater of absurd. Why the fuck was he wearing a jersey? Is anyone going to buy him as a man of the people?

This should be something of a fascinating watch, because nobody is going to truck out to Kanata to watch this hobo’s bindle of a hockey team. Which is going to hurt Melnyk where it hurts. But will he sell? Or will he pack up and go? Does he think he can recover the fanbase? It would be truly heartening to see a fanbase actually force out an owner for once.

But when you have as much money as Melnyk does, the game is tilted. He can probably outlast the ire of Senators fans.