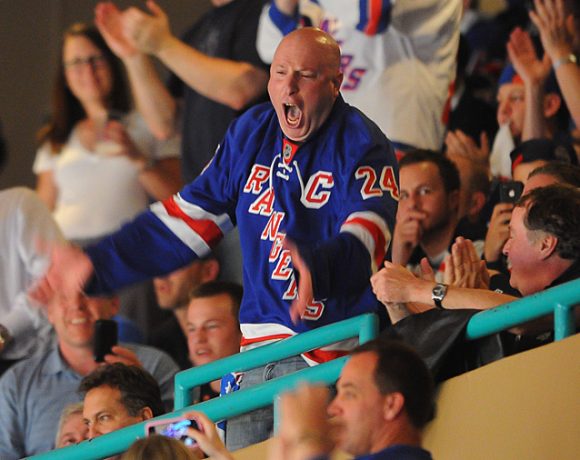 Beth is our Rangers correspondent, and she’s just about thawed out from the Winter Classic. But dying of frostbite is still better than watching the Mets there. Follow her @bethmachlan.

The Rangers are kind of weird. In the past few weeks they’ve managed to beat the Kings and Bruins while also losing to the Senators and Red Wings. They seem to go to OT/SO a lot. Are they just a middling team and this is what it looks like or is it something more?
Here’s the thing about the Rangers. They can beat anyone; they can also lose to anyone. And this isn’t just the unpredictability of hockey. It’s something about the team’s core psyche, if such a thing exists. They often come out for sequential periods looking like completely different teams. I would love to know what goes on in that room, I really would. But even the team that went to the SCF was like this. I call it “Going to the Bad Place.” As for the going to OT/SO … often, it’s that they’re not generating enough shots, and they’re relying on goaltending, not defensive strategy, to stop shots on them. Watch them; they often seem to wait for the perfect chance instead of just bashing the puck at the net, and I’d argue that you have to do both to win hockey games.
It seems like Rangers fans have been bitching about the use of Pavel Buchnevich for a while. But he’s spent most of the season with Kreider and Zibanejad, and he’s third on the team in scoring. What’s the problem here?
The Buchnevich problem is a Vigneault problem. He’s not a 4th line winger, and he seems to pay a higher price for mistakes (demotion, significantly reduced TOI) than, say, Jimmy Vesey. He plays beautifully on the KZB line, but unfortunately that’s kaput now without Kreider. And AV won’t let him get comfortable or develop chemistry anywhere else. It’s irritating, because when he’s confident and in the right place, he is so much fun to watch.
Meanwhile, Michael Grabner, who plays on the bottom six most of the time, is on pace for another 25+ goal season. How does this work?
I said Grabner wasn’t going to cool off, and he didn’t. Who knows why. And this is with him also MISSING some of the most perfect setups I’ve ever seen. That said, yesterday was his first goal in 2-3 games I think, so maybe the run is ending? But no question he ends with 25+.
The Rangers only have one player on course for even 60 points. Do they need to find a way to get a primetime scorer like…oh we don’t know, Max Pacioretty?
I honestly don’t think it’s that they need a goal scorer. I think it’s a system issue. First of all, and I think I said this before … Rick Nash is the unluckiest man in hockey. If his shot can be stopped by a post or a stick knob or a dirty look or a passing pigeon, it will happen. I think the guys they have need to stop with the fancy setups and put more pucks on net. Kevin Hayes is a beast with possession but where are the goals? Rookie Vinni Lettieri scored on a one-timer against Detroit and I swear it was the first one-timer I’ve seen from this team in I don’t know how long. SHOOT THE PUCK. Frankly, I’m more worried about the effect of losing Kreider’s perfect screen.