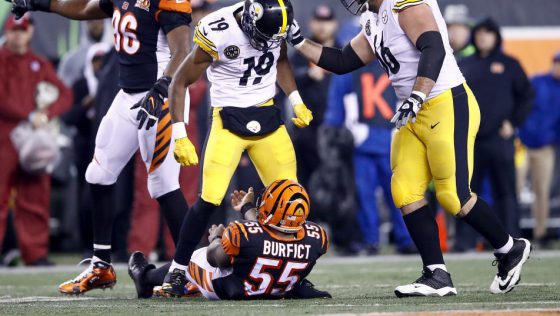 This Is What You’ll Get

Admittedly, comparing what goes on between the lines/boards of football and hockey is hardly a perfect juxtaposition. These are different sports with different rules, different methods, and different aims. So let’s say that up top. But last night’s Steelers-Bengals game was particularly ugly, and could be a huge piece of evidence against the “FIGHTING WOULD SOLVE EVERYTHING!” crowd in hockey.

There are probably a couple more caveats here. First off, the Bengals and Steelers is probably football’s most poisonous rivalry at the moment. And there’s a long history. So this is the absolute extreme of the ugliness football can have on the field when two teams feel they have to “sort it out themselves.” You wouldn’t get this from say, Packers-Cardinals or something. But it’s not like hockey doesn’t have teams with ugly history where everyone is on high-alert from the opening whistle. It wasn’t so long ago that Hawks-Canucks felt more like WarGames than it did a hockey game. And it’s a good thing that hockey feels less and less like this, and you need look no further than last night to see why.

But they can’t police each other. Or rather, this—last night—is what that policing looks like. It’s enforcement. It’s punitive. It’s an escalating cycle of revenge. You take out our guy, we’ll take out your guy. And it doesn’t work. If it worked, if players feared retaliation, we wouldn’t see the dirty hits in the first place. But we still do. We always have.

Seeing as how Barry is Deadspin’s leading hockey guy, I think he knows exactly what he’s saying here, or at least has written very similar thoughts about hockey. Because this has always been the theory for those who can’t let go of the past. That if hockey players could police themselves there wouldn’t be any hits from behind or boardings or goalies run or whatever else.

And that’s always been bullshit. One, those things have always been part of hockey even when Dave Semenko or Dave Schultz were allowed to pile-drive anyone they saw fit and barely get a penalty for it. To wish for a simpler time in hockey when players respected each other and never did anything dirty to each other is to wish for a time that didn’t exist.

If hockey were to let this go, things wouldn’t end with “just a fight.” There would be vengeance for that fight, and on and on it would go until someone really got hurt. And what would be solved then, other than a few very insecure men in the crowd feeling their oats? Because nothing bad has ever happened from that, right?

Much like Barry goes on to say later in this post, discipline needs to be the league’s job.. And if it’s serious about player safety, which it only is to the point that it doesn’t end up in court, it would really start to get the hammer out. Radko Gudas should have gotten 20 games, if not more. Attempts to injure, and do not fool yourself because  blindside hits and boardings are in most cases, need to have 5-10 game suspensions. The next Raffi Torres shouldn’t have to commit seven to eight utterly heinous acts before he gets a 40-game suspension.

But the NHL won’t because it still fears the backlash of a bunch of crusty, angry fans who are going to show up anyway. In truth, the fact that they yell the loudest almost certainly signals they are in the minority, because that’s how it usually works.

We make a pact with ourselves of course whenever we watch football or hockey (or MMA or boxing or pick whatever you want here). We know they’re highly dangerous, and really all we ask is that the players on display are fully aware of the risks they are taking. At this day and age, I think most are and are still more than happy to be out there. And we can live with that.

But last night crossed a line, and I can’t imagine I know anyone who watched Ryan Shazier or later the hits on Vontaze Burfict and Antonio Brown and felt good about it. And I know you can sit here and say Burfict is the dirtiest player in the league, and you’d probably be right. And maybe you think that makes what happened to him justified, but who draws that line? Do you think they feel that way on the Bengals sideline? Do they come looking for their own bounty in return? Who decides when it’s settled?

And that’s what hockey would look like if we returned to the 70’s and 80’s, except the players now are bigger, stronger, and faster. Trust me, Dave Schultz today would get his ass handed to him on a nightly basis (he was 6-1, 190. That makes him the same size as Patrick Sharp, basically.

It would become something no one would want except the truly unhinged. Sadly, hockey has always bowed to its unhinged quality, fearing that it cannot live without them.