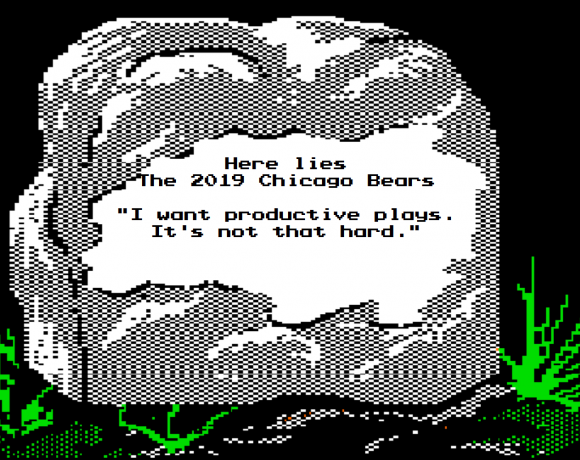 I had some friends over for the game, and as Eddy Pineiro’s last second kick hooked left, there was no anger. No rage, no Youtube-worthy TV smashing, no nothing. I think this level of numbness is part of the basic experience of being a Bears fan, this existential cloud that hangs over moments like today’s loss where we say to ourselves, “I knew he was gonna miss it”.

This game was gift-wrapped to the Bears by a vastly inferior Chargers team, with multiple end-zone drops, missed field goals, and drive-extending penalties. The last sequence before the end of the first half, with three defensive penalties awarding the Bears first downs in the red zone should have been a decisive score. Taylor Gabriel had a linebacker beat on a 4th quarter go route that Mitch overthrew, missing a sure touchdown. Naturally on the next play Mitch lost the ball and Los Angeles recovered.

That two play sequence exemplifies the 2019 Bears: even when they catch a break, they can’t catch a break by capitalizing on it; and before you can lament that missed opportunity, they do something even worse. This one stung, friends. This was still a winnable game, in spite of the Bears lack of offensive panache. They had three trips inside the Chargers 10 and came away with 9 total points. Eddy Pinerio missed a 33 yard kick earlier in the game. The Bears were in Pinerio’s range TWICE in the last three minutes and came away with zero points, after the second to last drive ended with a Trubisky sack taking the Bears out of field goal range.

I can’t write an entire article without mentioning how great it looked to see the Bears commit to the run, and how explosive David Montgomery looked. There was even a Mike Davis sighting! 162 team rushing yards is something to be proud of, especially for a team like the 2019 Bears. The run blocking looked better than it has all year, and the balance really opened up throws for Mitch. Anthony Miller looked great, creating separation and running deeper routes with ease. Mitch looked comfortable taking deep shots on the two free plays he got after drawing the Chargers offsides. It’s weird, I had no idea that having a good run attack might help set up the pass…?

Matt Nagy used the I-Formation a few times after mentioning it in a presser earlier in the week, and it looked good. I appreciate the Bears bringing in an extra lineman on a few plays and using J.P. Holtz as a fullback since he’s on the 45 man active roster and, well, idk I like seeing a power run game. I guess I am turning into my dad after all.

The defense looked good, with Kyle Fuller coming up with a great interception that he almost took to the house while Chris Spielman kept calling him Kendall. Khalil Mack came up with a crucial 4th quarter sack, and the team did well save for a few nailbiter deep shots that should’ve been touchdown catches but were dropped. Of the two touchdown drives they gave up, one was on a short field after a turnover and the other was a long Chargers possession when the Bears did their classic “we’re up by more than one score so we’re gonna play a soft zone” defense that I’ve seen my entire life.