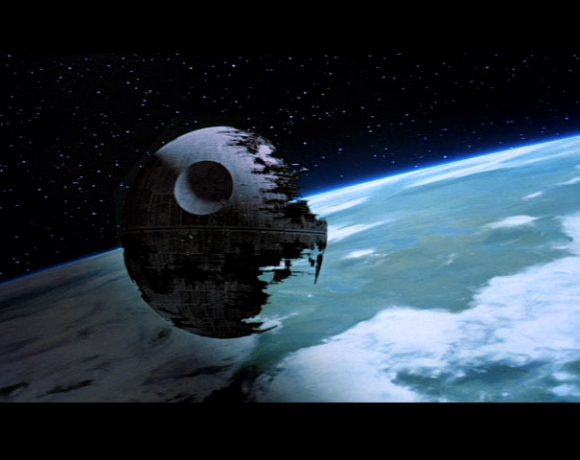 The Houston Astros and the LA Dodgers are the league model from building their teams from within, there’s just no way around it. Even when they have players going down with week to week or month to month injuries there’s a seemingly endless pile of high end prospects clamoring over each other to get playing time at the big league level. The most recent of these for the Astros is Yordan Alvarez, who has been nothing short of astounding for them since they called him up in mid-May of this season. Through 170 at bats so far this season, he’s slashing a gaudy .355/.431/1.164(!!!) with 17 dingers and 41 RBI.

Alvarez was traded to the Astros at the 2016 deadline from (SURPRISE!) the Dodgers for Josh Fields. The Dodgers had signed Alvarez to a $2 million signing bonus when he defected from Cuba, but had yet to play a single game for LA at any level. At the time, the Dodgers were looking to shore up their bullpen for an extended postseason run, and Fields fit the bill. Alvarez was an unknown quantity at the time, and the need was immediate. Now, Fields is a journeyman AAA pitcher, and Alvarez seems destined for Rookie of the Year honors.

So far, Alvarez has scored rookie of the month honors in June and July with these nutty numbers. The question everyone who didn’t pick him up off the waiver wire in their fantasy leagues wants to know is: are they sustainable? Looking at the advanced stats as they sit now Alvarez has has an ISO of .378, BABIP of .407, wRC+ of 204, and a wOBA of .469. Just at a very quick glance, every single one of those seem completely unsustainable were it not for the small sample size. His wRC alone would be one of the best in the history of the stat. So we can assume that some regression is due for young Mr. Alvarez, the question being just how much?

Taking a peek at some of the other stats available to us that might give a hint at how much regression is due shows that Alvarez has an excellent eye for the strike zone. His current 11% walk rate is above average, and his K rate is what you would expect from a rookie (24.4%) seeing MLB pitching for the first time. Looking at his whiff rate, it’s about what you would expect from a rookie as well, vulnerable to low and away and the high and outside pitches: 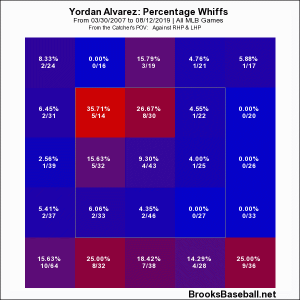 Nothing too crazy here. What about his slugging percentage vs the whiffs? 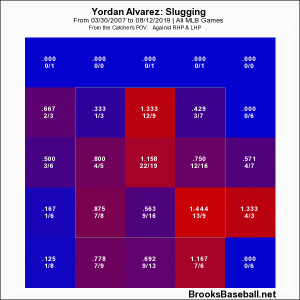 Oh my. Well what about just his batting average? 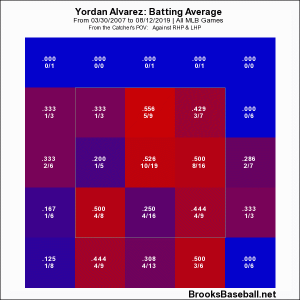 Yeesh. So apparently Yordan has the ability to cover the entire plate with pretty impressive power. He has to have a weakness somewhere, every Death Star has an exhaust port. Well his 33% fly ball to HR ratio isn’t gonna last. His .400 BABIP is pretty unsustainable, though even if he regresses .050 that still would probably project out to a 40 HR/100 RBI season in that juggernaut of a lineup. The kid has a good feel for the zone, and can get to pitches out of the zone with power and frequency. All this says to the Sox pitching for this series is they need to tread very lightly when Alvarez is up. Nova and Cease in particular need to work the top of their zone with the hard stuff, away if able. If they aren’t going to be precise with that stuff and leave some over the plate, Alvarez is going to hurt them. Though to be fair, that goes for pretty much the entire Astros lineup.