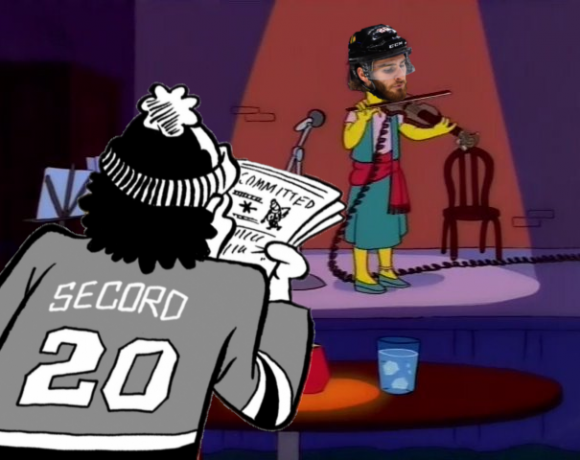 We turn now to the most confounding Blackhawk, Brandon Saad. Since coming back to Chicago in the Panarin trade, no Blackhawk has managed to do so much and not do enough. Of all the “get the band back together” trades/signings StanBo has done in his tenure, this one stands out as one that worked. And yet, there’s a feeling that he’s never quite lived up to his potential and never will. Let’s try this.

Per usual, Saad logged an excellent year in terms of possession. He led all Hawks regulars with a 52+ CF% and a 5.1 CF% Rel. On the year, the only two Hawks who eclipsed him in both categories were Dylan Sikura (33 GP) and Henri Jokiharju (38 GP). Even better is that this was the first year that Saad played a higher percentage of his time in the defensive zone (50.1%). I’ll go to my grave babbling about how much more weight strong possession numbers have when you’re (a) spending more time in the defensive zone and (b) on a team whose defense is the personification of putting your dog down, mostly because this Hawks campaign made me want to fucking die. I digress.

Compared to last year, Saad had an offensive Renaissance. His 23 goals were his third-best yearly mark in his career. His 24 assists were his fourth-best mark. His shooting percentage bumped up to 11.8%, just above his career average of 11.1%. (This was the first year since 13–14 in which he took fewer than 200 shots, though.) His 0.59 points-per-game ratio matched his career average precisely. Everything about his offensive output was exactly where a normal, not insane person would expect them to be.

Saad also moonlighted (moonlit? This fucking language . . .) on both sides of special teams play. On the power play, his five goals were fourth behind the unholy chimera of Kane, Toews, and DeBrincat. On the penalty kill, Saad was by far the best among a bunch of bad in isolation. Of the Hawks who played at least 100 minutes on the PK, only David Kampf was on the ice for fewer goals against (17 vs. 16). Saad was also the best regular penalty killer in terms of suppressing high-danger shots (21.33 HDCF%) and goals (13.33 HDGF%) on the PK.

All in all, Saad was dinner at a sensibly priced restaurant followed by a night of efficient German sex.

The problem with Saad is that, if you’ll pardon me going Q on you, you always sort of feel like he could be doing more. Admittedly, some of that might be of our own creation, as few people have carried Saad’s water like I have. You see 47 points over 80 games and think, “Yeah, that’s pretty good.” You can look at his fancier stats and see that Saad is at worst a strong hockey player. He’s the Dean Malenko of the Blackhawks. But when the expectation is Marian Hossa II, which is what he flashed early in his career (or at least what we saw), there’s always a twinge of disappointment with Saad when the dust settles.

You’ll occasionally see him simply overpower everyone on the goal line, putting his shoulder down and stuffing the puck toward the net. You’ll see him turn on the afterburners through the neutral zone and make defenders look like drunks who didn’t wipe well enough looking for a car they never owned. You’ll see this and wonder, “Why can’t he do this all the time?”

My soft belligerence toward Saad is that you sometimes have to listen to the notes he ISN’T playing to justify the point totals. You have to dig into the analytics to get a full picture of what he brings. His contributions aren’t intuitive, and so explaining why he’s good and why he’s important can easily sound like bullshit, even if we really believe it isn’t.

You sort of expect a guy with Saad’s speed, power, and awareness to crack 60 points at least once, especially when given the chance to play with guys like Toews, Kane, and DeBrincat. And though he probably should be playing with those guys regularly, he spent a lot of time on the third line with guys like Kampf, Sikura, and Kruger. He looked good doing it, but it falls short of the expectation we had for him.

Saad will turn 27 before the first month of hockey ends next year. He’s still a possession dynamo who can contribute 20+ goals a year. He’s a stalwart on a bad PK and can chip in on the power play. The Hawks have him for another two years at a $6 million per cap hit. Though it’d be surprising to see him traded, of all the Hawks forwards, Saad likely has the most value in terms of movability (before you can say DeBrincat, just don’t). He’s a rhythm guitarist in a band full of shredders, and we’ll always wonder if he’ll ever be anything more.

And if he isn’t, that’s probably OK, too.