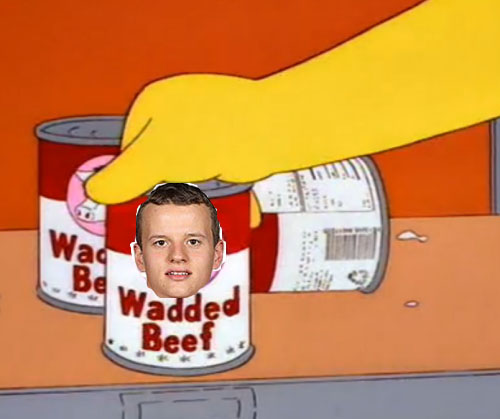 David Kampf ended up being a mildly pleasant surprise this year as basically our best defensive center. And to think, I called him wadded beef! (But seriously, he’s still kind of wadded beef and besides that’s some impressive Photshopping, no?). Let’s do it:

Kampf was another solid European scouting pickup a couple years ago, and on the cheap too. He was the closest thing to a shutdown center that the Hawks had this year, particularly as Artem Anisimov sucked out loud and Marcus Kruger got slower and less effective. The numbers aren’t going to wow you, but they should all be viewed in light of this one: 63.6 dZS% at even strength, 70% in all situations. At even strength, his shots against were 371, goals against were 25, and his xGA was 26.6—all of these were second-best to Kruger (among centers) but not by a large margin and Kampf played more minutes. Kampf had 31 takeaways to a paltry 6 giveaways. During the stretch in February-March when he was out with a broken foot, the Hawks barely stayed above .500, going 7-6 (I know, not exactly unique to that time but here me out), whereas they went on a five-game wining streak once he came back and ended on a 9-4-3 record. And while it’s not the most enlightening or useful stat, for shits and giggles his faceoff percentage was 45.3; again, not outstanding yet not awful either in light of his zone starts. All of this is to say that Kampf has shutdown-line center written all over him or, in a worst-case scenario, fourth-line center. With contract negotiations said to be underway, the Hawks can give him a small raise to around $1 million a year and have this shit locked up.

David Kampf is a bottom-six guy who was on the worst penalty kill in the league. And he was a big part of that PK unit—of all forwards he had the fourth-highest minutes. So I’d like to say he’s an up-and-coming defensive star for the forward corps, but nothing about the Hawks defensively was good enough this season for me to make a statement like that. He’s basically “a guy” for the bottom six who will go no higher than that on the depth chart. And can the slightly better record really be attributed to him coming back from injury? Not entirely, to be generous. And besides, what did it matter anyway? The whole team shat the bed when it mattered most at the end.

The Hawks should re-sign Kampf for a low cap hit and he’ll be an effective 4C, and maybe just maybe we’ll get him, Caggiula, and Kahun making an honest-to-goodness checking line. He could also be part of a penalty kill that somehow learns to play its way out of a paper bag (which it can’t right now). Being wadded beef should be perfectly suitable for David Kampf—unappealing but will keep you from starving in an emergency.