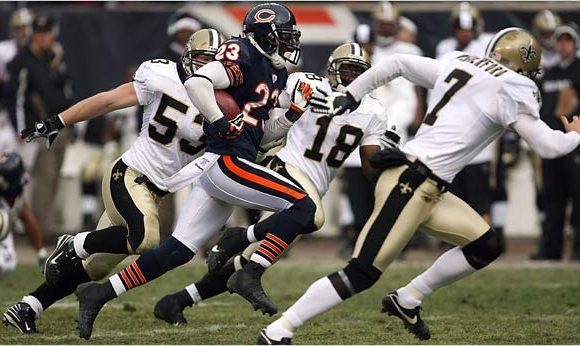 Ali/Frazier. Jordan/Bird. Brees/Orton. Some match-ups loom larger than the game itself, as two titans of the sport go head to head in a winner take all showdown. It was week 17 of the 2007 season, with both teams eliminated from playoff contention a mere 12 months removed from their previous encounter in  the NFC Championship. Both games were won by the Bears, which in January of that year took them to the Super Bowl, and in December it dropped them two spots in the next years draft, and it would’ve been sweet if Ryan Clady was the Bears pick instead of *checks notes* uhhhh Chris Williams? Jay Cutler would’ve been much better as a Bear if they had Clady, so I’m retroactively blaming the lack of success of the next few years from an offensive line standpoint on this Week 17 Bears game.

This Bears team has a lot of the holdovers from the Super Bowl squad from the year before. You know all the big names, but it’s always the middle of the pack dudes that I love remembering, so let’s reminisce and see how these hidden gems performed that cold December afternoon.

My Favorite Forgotten Bears from 2007 (in no order):

5. Rashied Davis- (1 Kickoff Return, 5 Yards): I have a soft spot for special teams wide recievers (I might be the only person in Chicagoland that misses Josh Bellamy), and Davis was exactly that. Earl Bennett without the flash, somehow.

4. Garrett Wolfe- (4 Carries, 7 Yards, 1 Catch, 32 Yards): I was at NIU when Wolfe all of a sudden played NCAA Football on Rookie mode, and he was electric. I had no idea that I was hoping for him to be Tarik Cohen until I saw Tarik Cohen. Turns out he wasn’t very good and I was so bummed. Fun fact: this was his longest career catch. Bonus fun fact: I drafted Garrett Wolfe in my fantasy league that year, and there’s a harsh noise/grindcore band called Garrett Wolfe and no they aren’t football fans.

3. Israel Idonije- (1 Tackle): Izzy is a guy that nobody outside of Bears fans from this era remember, but those of us that do will always remember how much of a team player Izzy was. He did everything he was asked and played pretty much every spot on the defensive line, while also always being on the punt return teams. There are so many Devin Hester highlights where you can see a huge dude with a 71 on his jersey throwing a key block or escorting Devin to the endzone.

2. Mark Bradley- (1 Catch, 19 Yards) Give me all the special teams wideouts, please. All things considered, Bradley was a bust as a second round pick in the 2005 Draft, but when I looked at the other picks in the 2005 NFL Draft’s second round, they didn’t miss out on anyone that would’ve made sense. 92 career catches and 9TDs in 57 career games is not remarkable, but like I said, dude could block and he just looked the part. I’m also super biased because I crushed Madden 2006 with Mark Bradley, my favorite Bears WR in Madden after Kevin White in Madden 17.

1. Adrian Peterson- (1/1- 9 Yards, 1 Passing TD, 21 Carries 91 Yards, 1 Catch 9 Yards) The OTHER Adrian Peterson. You know, the one that’s lawful good as compared to the lawful evil Hall of Fame running back of the same name. The biggest difference between the two is the talent, but Good Peterson played with the Bears for his entire 8 year career and sure if he was starting you knew someone was hurt, but oh man he gave his all. You’d see him come in on a random 3rd and 18 and catch a 7 yard pass and then cover the punt (since he was always the punt team QB), return to the sideline only to be seen again the next time the special teams was on the field. It’s surreal to think that if your fantasy league played through week 17 that Adrian Peterson would’ve been an RB 2 that week and won your league. If this Adrian Peterson helped you win your Fantasy League in 2007 you should probably Venmo him ten bucks or something. Not because he needs it, but for the principle of the thing. He had the second most receptions on the team that year. Wow that’s ugly.

Anyways, this game was won by the Bears, with Devin Hester scoring twice, once on a long pass and another on a punt return. This was one of those Hester returns where he already has a giant hole to run through and isn’t even touched on his way to the endzone. Before I sound like I’m being critical of the Windy City Flyer or whatever his nickname was, I should establish that he is the greatest returner of all time and absolutely should be in the Hall of Fame.

That said, if you go back and watch his touchdown returns from this era, he is untouched on about half of them. I think a big reason why I have a soft spot for so many of the dudes that anchored the Bears special teams in that era is because the team kept a core together for that purpose and that purpose only and it paid dividends. Bradley, Peterson, Izzy, Brendon Ayanbadejo… those dudes opened up some massive lanes for Devin to take advantage of.

Watching these old highlight reels makes me miss having a solid special teams core like the Bears of that era. The Ryan Pace era has been an improvement in so many ways than the GMs before him, but I do miss the commitment to a group of backups simply because of what they brought to that part of the team.

I hope at some point between now and Sunday’s kickoff, you take a moment and really think about your mid to late aughts Bears players. Sit back and think about Brandon McGowan, won’t you?