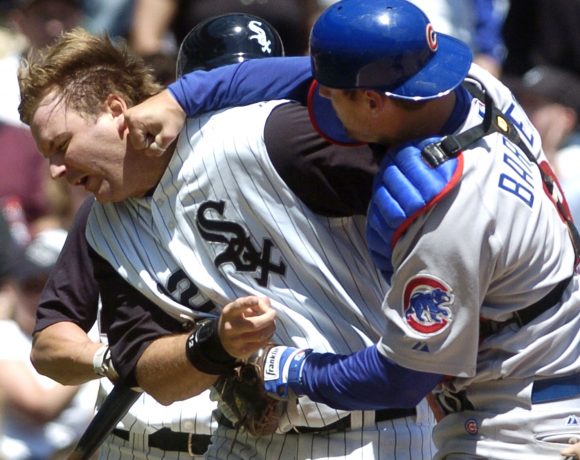 It’s been a while since we’ve gotten goofy before a weekend, so let’s do that! It’s Opening Day next week, and it promises to be at least an interesting season on both sides of town. This also might, might foreshadow some other things coming to this blog in the next few weeks, but I’ll get to that in the coming days. For now, let’s just talk some baseball!

Cubs: Well, I already did this, and you can read it at Baseball Prospectus. But essentially, in a nutshell, after an offseason that became more hellish by choice than it ever should have, the Cubs are still going to hit a lot, they’re still going to have a very good to better than that rotation (assuming health as it’s all over 30), and you can always remake a bullpen on the fly if you have to. They’re winning 92-95 games again, which I can’t decide if it’s a good thing or not because nothing should ever prove Tom Ricketts right. We’ll run that kitten over when we get to it. ;

Now the fun part….I asked Adam Hess, McClure, and Fifth Feather to do a Q&A on their beloved 35th St. Nine. Here you go:

Now that the dust has settled on the offseason, let’s focus on what’s here. What does Yoan Moncada‘s shift to third mean? They don’t think he can play second? Will he hit enough to be on a corner?

Hess: The biggest thing I think it means is that they’re preparing to rush 2018 first round pick Nick Madrigal to the majors. There are some scouts who would call his hit tool MLB caliber already, and it did get 70 grades after all, and his bat-to-ball skills are great. And he’s got the right attitude, I suppose. But I think it has very little to do with Moncada’s ability at second – he had the range for it, just needed to soften the hands. Maybe they’re hoping the hot corner will reduce thinking time as the ball comes at him and reduce his necessary movement and therefore cut down the errors. I can’t really call it. In terms of hitting, I think he will hit fine for the hot corner. His problem isn’t the bat, it’s not swinging it. He took so many called third strikes last year because he thinks he has the best eye in baseball, but umpires were doing him no favors. He was a .400 hitter before the count got to two strikes. If he can keep himself ahead in the count, he should mash.

Feather: Do we have to focus on what’s here? It seems more like a threat than anything else. Fine…Moncada’s shift to third basically signals to me they want to push Madrigal through the system as quickly as possible, perhaps with an eye on a September call-up depending on how his minor league season goes. Moncada can certainly play second if you’re willing to live with the occasional error or 20 as his range is better than most at the position. In an ideal situation you’d have Machado at 3rd and Moncada at 2nd to create an incredibly dynamic power line up. God damn it. Now I’m going to be red and nude again. Moncada has the power profile to play at 3rd. It’s really a matter of whether or not his off-season training to be more aggressive in the batter’s box pays off and he cuts down on his incredibly high number of backwards K’s.

Now that Eloy is signed and can actually be here for Opening Day instead of whatever bullshit reason they would have used to keep him in the minors for two weeks, what are you expecting?

McClure:  I think the first trip around the league is going to be rougher than many are anticipating for Eloy, I think his much lauded contact rate isn’t going to be commensurate with what he’s put up before in the minors, but he’s shown that he learns real quick. But when he does get ahold of one it’s going to be on the Dan Ryan. If you’re looking for an actual prediction, I spose I’ll go with a .250/.325/.425 slash line with 18 homers, assuming he plays 140ish games.

Feather:I’m expecting him to be Frank Thomas reincarnate. Is that too much to ask? With that profile in mind, let’s say .275/.350/.490 with 25 homers and 80 RBIs because no one is getting on base for him. If he’s not on the opening day roster after his new contract, I will absolutely light myself on fire in effigy in front of Rick, Jerry and Kenny. Can’t release Nicky Delmonico without giving him a chance to prove himself, after all.

Who is one player who might surprise and keep himself around when the Sox are contenders again?

Hess: To me it’s Yolmer Sanchez, who is a useful utility knife in the infield. He’s capable of playing 2nd, 3rd, and even short in a pinch, is a switch hitter, and can swipe the occasional bag. He doesn’t have much pop, but he can get you a .300 or better OBP, and when they’re good again, that entire profile will be more than acceptable from a bench infielder.

McClure: As stated above, I do quite enjoy Yolmer, and think he’s a much more natural second baseman than a third baseman, and he showed some traditional top of the lineup capabilities last year with 34 doubles and 10 triples, even though his on base rate was lacking a little. That 2nd baseman spot is basically there for whenever Nick Madrigal is ready, but Yolmer certainly looks like he can be a valuable utility contributor on a good team.

Will Lucas Giolito‘s new delivery keep him from walking the park?

Hess: God, I really hope so. I think somewhere inside Giolito is the pitcher who was earning a 70 overall grade from MLB scouts and considered the top pitching prospect in baseball as recently as 2016. Some combination of awkwardness from being so damn tall, and the unfortunate reality of “this is just how it goes when you’re a White Sox” has ruined that, and any chance of him hitting the ceiling scouts once envisioned is gone. But with Kopech and Dylan Cease around as your potential 1/2 duo (in either order, really, because they’re both studs), if you can still get production from Giolito worthy of the fourth spot in a rotation, I think their rotation will be hard to hit. But there’s a lot more cynicism on Gio’s future for me now than a year ago.

McClure: It’s now going on 3 years removed for Giolito’s “top prospect” status, and last year he couldn’t hit a bull in the ass with a banjo even when he was trying to throw strikes. Hitters are going to stand up there with a bat on their shoulder at first and force him to find the plate, and then IF he shows that he can, they’re going to sit on his fastball, which isn’t particularly electric with either velocity or movement. Giolito seems like a smart guy in interviews, so in order to have any kind of career in the majors, he might have to switch from being a “stuff” guy all his life at 6’5″ 230, and have to actually learn how to pitch and set hitters up with sequencing. But again, this is all under the assumption that he’ll get within half a parsec of the plate, which is far from given.

Feather: It better. I can’t imagine he has much rope this season after setting a new ERA high or whatever embarrassing record he set. With Dylan Cease looming and a couple other interesting rotation pieces in Charlotte, Giolito may be the first casualty of the rebuild if he can’t improve even in the slightest. Which is too bad because as Matt mentioned, he seems like a really nice guy who GETS IT.

Ok so the winter wasn’t what you’d hoped. But this division pretty much sucks. Couldn’t the Sox hiccup a few more wins than expected simply because of that?

Hess: I mean, they absolutely can wind up winning 70 games instead of 62 again. They probably have the best bullpen in the division, which is huge. But I don’t think this division is bad enough for them to even flirt with .500 barring some huge breakout seasons – from just about everyone. Tim Anderson would need to finally get his OBP above .300. Yoan would need to swing the bat and rake like I suggested he can. Eloy probably needs to hit .300 and mash 40. Giolito, Reynaldo Lopez, and Carlos Rodon would all have to be reliable. Is that all possible? Sure. But the odds of it all lining up are slim to none. The unfortunate reality is even if they managed to get their dicks out of their hands and ultimately landed Machado, that probably wouldn’t have made them more than a 75-win team. Their biggest need is starting pitching, and while I’m sure they’re optimistic and hopeful about who they have, they have to know it’s not good enough to compete, at least not yet. I picture them moreso being in the top-5 of the draft again next year.

McClure: They might be able to, but it’s still not going to get them anywhere even if the rest of this division is utter trash. There’s just not enough pitching here with Kopech unavailable for a year even if every single young bat performs to or exceeds expectations.

Feather: Yes, and the fact their bullpen is much improved. They absolutely could stumble into the 70-80 win territory based on that alone. Last year, their bullpen was Jace Fry and 11 guys doing things. They brought in Kelvin Herrera and Alex Colome which should at the very least give Ricky more than one option in the 7th, 8th or 9th. With Detroit and KC throwing out rosters with dead guys on them, their win total SHOULD improve. But this is the White Sox we’re discussing. So Herrera will most certainly suck, Colome will blow 30% of his save opportunities and Ron Gardenhire will somehow squeeze 85 wins out of a pathetic Tigers squad that wins 19 of 21 from the Sox. This is how it works now!