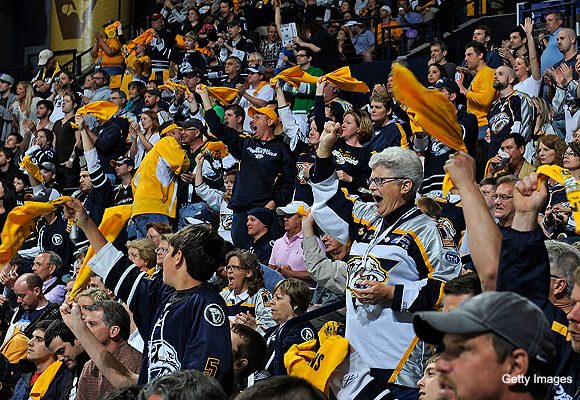 With the Hawks’ first trip into Music City tonight, and the fact that it’s a nationally televised game on NBCSN, you can be sure it won’t take more than three or four minutes before you hear A. just how loud the building is for a regular season game, B. how loud it was during the playoffs last year when the Hawks got swept. Gee, doesn’t it seem like every year the broadcasters are telling us this is the loudest building they can remember in all their years? We wouldn’t put it past hockey media to have lost their memories through various braincell-damaging activities, but it does seem a coincidence.

And you will hear the noise through your screen. You can’t escape it. And by the second intermission, you might start feeling bad about yourself, whatever the score. And you won’t know why. You’ll ponder, because maybe you had a good day today and were feeling particularly good when you got home from work. You thought you looked particularly good today. Maybe you finished some project that had been taking forever, or your least favorite coworker got fired or you confirmed a pretty hot date for later in the week. So why all of the sudden are you feeling so unsure of yourself?

And then you’ll realize it’s because you’ve spent the previous hour, hour and a half listening to 18,000 people repeatedly and constantly telling you that you suck. And maybe they weren’t directly talking to you, but hearing it over and over again and you can’t help but take it on yourself. After a while the question will be unavoidable: “Do I, in fact, suck?”

That’s what happens when watching games at Bridgestone Arena. A constant hum telling you that you suck. No matter the score, no matter the chant, no matter the time. YOU SUCK. It never stops. So much suckage. You thought you had it figured out, but no. The yellow-clad throng has convinced you that yes, Virginia, you suck.

And what’s more exasperating is that the only time the Predators fans don’t yell, “You suck!” is when the organist is playing WWE’s Kurt Angle’s theme. WHICH IS EXACTLY WHEN YOU’RE SUPPOSED TO DO THAT!

While we love the unique and boisterous atmosphere at Predators’ games, perhaps we can expand our taunts to something more than two words, one involving “suck?” Are we asking too much? Yes, we know this is the limitation of North American fan culture. And hockey media is blown away by anything other than “Go Leafs Go!” We get it.

You have the power, Cellblock 303. You’re Music City for fuck’s sake. Can’t you introduce a song or two to your crowd? We just can’t suck anymore.