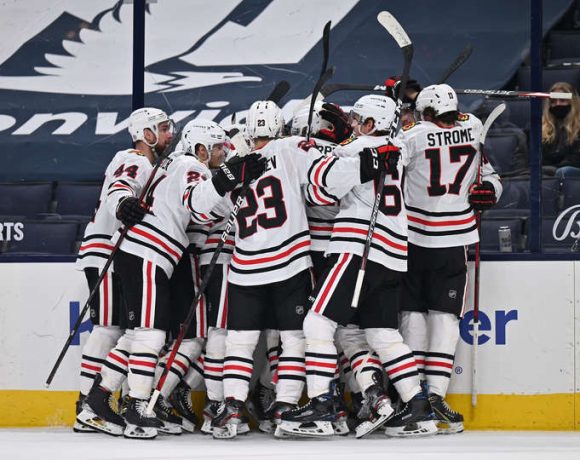 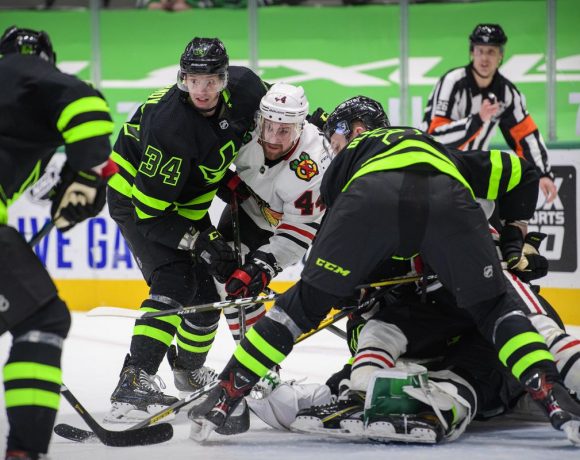 This series was a perfect microcosm of the Blackhawks season thus far, showing exactly what happens when the team:

A) Does or does not get excellent goaltending and

Game one showed us very clearly what happens when the Hawks get mediocre or below goaltending (much like the last Detroit series) and is not able to cash in on powerplay chances, and game 2 was the exact inverse of it. Watching game 1, it was pretty clear the Hawks “Give A Shit” level was next to zero, as they were dominated by Dallas almost as soon as they stepped out of the team hotel. While in a 82 game season you’re always going to get games like that (especially in February and March), the wonkiness of this year doesn’t provide much cover for stinkers like those. It’s magnified by the fact that the Hawks are attempting to put as much distance between themselves and the Stars as Dallas attempts to climb out of it’s own grave.

Game 2 continued the season long trend of the Hawks thumbing their noses at advanced stats, getting dongwhipped in CORSI up and down the scoresheet. Yet as he has done most of the season Kevin Lankinen stood tall and kept the Stars off the board until the 3rd period, allowing the Hawks offense to build up an almost insurmountable 4 goal lead (not that they didn’t try and allow the Stars back in the game, more on that later). While not in the area of a “Must Win Game” for the Hawks just yet, it might have been for Dallas. Keeping the Stars exactly where they were before the series started was the bare minimum for our Men of the Four Feathers, so in this aspect game 2 (and the series, I suppose) was a success.

-I really might need to come up with a new subtitle and image there, as the Hawks have changed their season motto from “One Goal” to “Advanced Stats Can Eat Shit.” More often than not the Hawks are getting nuked in the possession metrics, yet rolling on to victory. Game 2 was the penultimate example of this, as in the first two periods Dallas had an even strength CORSI of 75% and 70%, and a shot advantage of 22 to 8 and yet the Hawks led 4-0.  Anton Khudobin had a cool .500 save percentage before he got yanked in favor of Jake Oettinger, which I’m being told is not very good for a goalie to have, but great for a team to have shooting percentage wise.

-Seriously, just look at the Gameflow chart from last night. If you had no idea of the score and saw that, you’d assume that the Hawks were the team down 4-0 and not the other way around. It boggles the mind. If the Hawks were a baseball team, they’d have a BABIP of about .654.

-As long as Kevin Lankinen continues to keep the Hawks in games like he did, the Hawks have enough weapons offensively to continue to get points. If that well dries up anytime soon, things are going to get itchy as far as the playoff race is concerned. Honestly, the Hawks entire postseason hopes rest on his shoulders because the team is a clown rodeo in it’s own end. On the first Stars goal last night there were not 1 but 3 different Hawks below the goal line. I don’t know if that happens due to a lack of communication, lack of defensive structure, or some other deadly combination but it cannot continue.

-Speaking of things that need to stop, Dominik Kubalik got a whopping 12:30 of ice time last night despite scoring a goal 2 minutes into the fucking game. What exactly does he need to do to get on the ice more? He’s 3rd on the team in both goals and points behind Kane and Top Cat, and yet he plays on average 40% less than those two. Meanwhile Kampf, Soderberg, Janmark and Carpenter all played at least 3 more minutes than Kubalik. Those four guys are nice players, but none of them can even come close to doing what Kubalik can do with the puck. THIS HAS TO STOP, but we all know it won’t.

-Adam Boqvist is going to be a world killer someday, but these last few games he’s shown just how unrefined he still is on the defensive end. His ill-timed jump into the play and subsequent confusion as to which man was his after Duncan Keith played the puck carrier lead directly to the Stars first goal in game 1. He was also one of the 3 Hawks defenders below the goal line leading to Roope Hintz (who’s name can be rearranged to spell Zither Poon) being all alone in front of Lankinen. Once he can fortify this part of his game he’s going to be pretty unstoppable, because his offensive abilities are otherworldy.

-Carl Soderberg might not be the second coming of Thomas Holmstrom, but as long as he continues to park his ass directly in the opposing goalie’s line of sight on the power play I’ll take it. His screen of Khudobin on DeBrincat’s power play goal in the 2nd was picture perfect, and it’s probably the most underrated part of his game.

-Game 1 was a mess, and the less said about it the better. Kane’s 1,000th game was only memorable for all of the video tributes shown throughout, highlighted by a message from The Captain himself, Jonathan Toews. I’m not going to speculate on what he’s fighting with, but I was very glad to see and hear from him again. The Hawks could definitely use his experience at the dot, as they got smoked at the faceoff circle 61-39 and 54-46 in the series. Get well, Cap.

-The split in the series puts the Hawks at 14-9-5 (33 points), putting them 7 up on Columbus after they farted away a 2 goal lead to the Panthers last night. They’re also 12 points up on Dallas, which burned through 2 of their games in hand.

-Next up for the Hawks in their stretch of difficult March games is Coach Q’s Panthers, the team 5 points ahead of the Hawks in the standings. If the Hawks can take half the possible points in each series for the rest of the month, it’ll be hard for anyone behind them in the rankings to catch up. Let’s hope Lankinen’s joints are up to the task. No pressure.