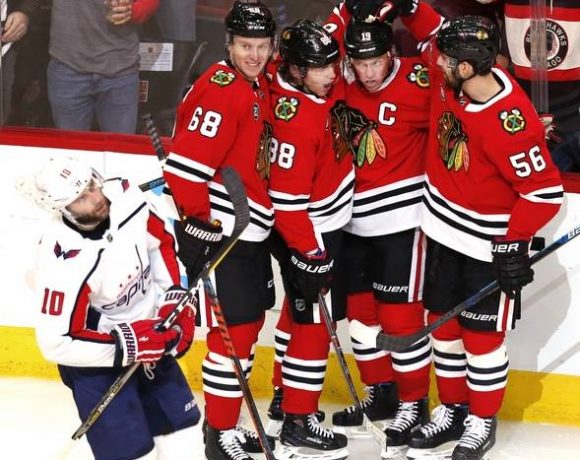 Just Win, Baby and Other Notes

The bye week/All Star Break is about halfway over for our Men of Four Feathers, so it’s time to start thinking about Blackhawks hockey again. After a piss-poor but not entirely unexpected first half of the season, the Hawks sit last in the Central, 27th overall (two points out of the cellar, ahead of the Senators, Devils, Kings, and Flyera), and 30th in goal differential, ahead of only the Kings. Help isn’t coming, and the only reason the Hawks aren’t sitting in dead last in everything is because of a brief spell of competence spanning late December to early January. It doesn’t look good, dear reader.

And yet, I still want to watch this team win, lottery be damned.

On Friday, the Beast From the East (time zone) Adam Hess laid out a case for the Hawks doing everything they can to tank the rest of the year. To SparkNotes it, no, that doesn’t mean telling the players to Black Sox it. In its most extreme case, tanking would involve trading someone like Patrick Kane, assuming his dad would be OK with it, and starting all the way over. And as much as I would be happy with, say, a straight Kane-for-Subban trade, we all know that isn’t going to happen.

I understand why there’s a contingent that would push for a tank: It would lay the groundwork for the future, give Colliton a chance to play guys whom the decision makers believe are part of the future, and give those same guys a chance to adjust to the expectations foisted upon them. But with the roster as it stands, this team is about as close to tanking as it can be. The only way this roster can get much better as it is, is to rotate Seabrook, only play Ward in back-to-backs, and keep Anisimov on the fourth line. The guys who are a part of the future are pretty much already here: Strome, DeBrincat, Harju, Kampf, possibly Delia. All we’re really waiting on is Boqvist and maybe Beaudin and Barratt.

But even if it were possible for this team to tank any worse, I’m not sure I’d want to see it.

Even though this team sucks like a Kirby, I still celebrate the wins. I still jump off the couch and scare the bejesus out of the dog when Top Cat takes a cross-ice pass for a quick one-time goal. Every time the Hawks go on the power play now, I stand and pace in anticipation for a goal that’s more likely than ever to come. And you better believe I nearly lost my goddamn mind when Delia made that jumping save against the Caps a while back, even though it was the result of him completely losing his ass in the crease.

With the expectations as low as they were coming into the year, there’s still joy when the Hawks aren’t puking all over their shoes. Toews’s Renaissance has been a much-needed relief. Watching Alex DeBrincat outdo himself in his sophomore year (he’s on pace for 40+ goals right now) gives hope for a brighter future that might not be as far away as it seems. David Kampf is one of the best defensive forwards in the entire league, which is as shocking as it is exciting.

And though the defense has been a recycled marital aid this entire year, seeing Connor Murphy play well and with confidence is somewhat vindicating. Erik Gustafsson, for all his warts, has been fun in the offensive zone and on the power play, defense be damned. And Collin Delia’s performance, funk and all, has been a respite from the professional ass pickers the Hawks have trotted out since Corey Crawford’s untimely demise.

For all the pissing and moaning I do about this team, there’s still joy in watching them win, even if that shaves at their chances of winning the lottery. I want to see some deadline moves, particularly involving Anisimov; any one of the Shitty Bash Brothers in Hayden, Martinsen, and Kunitz; and possibly Gustafsson if the price is right. But all in the name of winning as many games as possible, because it’s still fun to watch them win, especially when they’re not supposed to. We may have problems with the people running it, some of the players on it, and the countless off-ice embarrassments it’s self-inflicted, but we still derive joy when this team wins. If you didn’t, why would you bother with it?

When the Hawks won the lottery in 2007, they were slated to pick fifth. Even if they lose out, nothing is guaranteed. Whenever possible, I’d rather not leave things up to chance. So, just win, baby.

– Kendall Coyne Schofield is less than one second slower than Connor Mc-fucking-David. Brianna Decker was the best of the best among passers at the NHL All Star Game by more than three seconds—and if you’re taking the NHL’s word that her time was “unofficial” and that her “real time” was slower than Draisaitl, I don’t know what to tell you. This is a league that doesn’t know what goaltender interference is and can’t get goal calls right with all their technology, and now, you want me to believe they know what they’re doing? Anyway, with the league kind of moving toward more skill and speed, you wonder which team is going to give a woman her shot to play in the NHL first.

Think of it this way: If an amateur male hockey player did what Coyne Schofield or Decker—both Olympic gold medal winners—did, front offices would be busting down the gates, right now, to talk to that player about playing in the NHL, or at least getting a try out. There wouldn’t be angst about, for instance, Decker not getting paid prize money, because that amateur guy would likely have a league-minimum contract (currently, $650,000) in front of him by the end of the week.

The NHL took a step in the right direction by letting Coyne Schofield and Decker show off their skills, which are objectively impressive regardless of the context. I very much liked that and would like to see even more of that, by which I mean I would like to see skilled and successful women playing hockey in the NHL in real games throughout the season. I would rather give someone like Coyne Schofield or Decker a look over someone like current Chris Kunitz, Ryan Reaves, or any of the other trash pail assclowns front offices try to trick us into thinking are hockey players today. That they—along with Fast and Johnston—got money to donate to charities, endorsements from adidas, and a chance to show their stuff is awesome, and I want to see more of that. Getting to watch skilled hockey players who aren’t in the NHL upstage hockey players who are in the NHL is 100% my jam.

I’m sure there will always be concern trolls wringing their sticky hands over “What happens when a woman takes a hit from Tom Wilson?” or “How will women cope with the way hockey players act around each other?” or whatever other socially inept excuse they want to peddle to cover for their disdain of women. I do not give a single lingering fuck about what those people think at all. If a hockey player is as talented as Coyne Schofield or Decker proved to be (once again) on one of the most-watched hockey stages around, the question shouldn’t be, “But how can a woman fit into a real game?” It should be, “How can we get this talent on the ice?”

Ain’t no one worried about how Alex DeBrincat will deal with a hit. And if your behavior around “the guys” is so reprehensible as to draw questions about how women would “cope with it,” then fix your fucking behavior. There’s too much talent at risk to waste time fostering whatever illusions these hockey-playing hayseeds have about their masculinity.

Still, I’ll move forward with cautious optimism that the NHL will keep showing us the best Women’s Hockey has to offer until the league takes the logical next step and offers it themselves.

– The Hawks traded Arizona’s fifth-round pick to the Kings for “Another” Dominik Kubalik. He’s a 23-year-old winger whom the Kings drafted in the seventh round back in 2013. He’s playing in the top Swiss League and has 20 goals and 23 assists so far this year. He’s still youngish and, like most guys who hop the pond, needs more ass to his game, but it’s fine. It’s a low-risk, high-reward trade if everything breaks right.