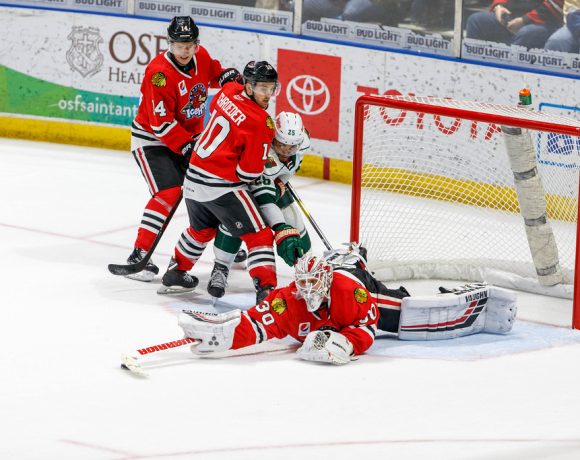 The Rockford IceHogs, AHL affiliate of the Chicago Blackhawks, have been at home for most of the last three weeks. They made the most of the extended time in their own barn.

The Hogs had nine of their last ten games at the BMO Harris Bank Center. Their record at home during that stretch was 7-2. That includes a thrilling finish to the home stand this weekend.

Rockford had dropped two games in a row heading into the weekend and found themselves down 4-0 Saturday night against visiting Iowa. The piglets roared back into contention to force a shootout and bested the Wild, then finished the weekend with a win over San Antonio.

The IceHogs are now 25-21-3-5 on the season. The pendulum swings the other way for Rockford, who are on the road for seven of its next eight games. The current jaunt begins in Grand Rapids, where the Central Division leaders are 20-5-1-3 this season. The Griffins have won eight of the last tilts at Van Andel Arena; Rockford is 1-2 in Grand Rapids this season.

From there, the Hogs go East to take on Hershey on Saturday and Wilkes-Barre/Scranton Sunday. Rockford has home victories in prior meetings with the Bears and Penguins.

There hasn’t really been any roster activity this week. Brandon Davidson returned from injury Sunday. He scored the game-winner against the Rampage after being out for nine games. Blake Hillman also rejoined the lineup Saturday after missing five games.

Nathan Noel’s last game was back on January 12. Tyler Sikura’s thumb has kept him out of the lineup since January 6. Terry Broadhust was a late scratch on Sunday; no word as to his status for this week.

Matthew Highmore, who had shoulder surgery back in November, is practicing with the team. A return from the second-year forward could provide a big boost to the Hogs playoff hopes.

The Hogs dropped their second straight game as the Stars inched closer to Rockford in the Central Division standings.

Texas drew first cord late in the opening period. The goal came from Park Ridge native Michael Mersch, who sent a deflection past Rockford goalie Kevin Lankinen at the 17:10 mark.

The IceHogs narrowly avoided a shorthanded goal against them early in the second period, then came down the ice to tie the contest. Luke Johnson brought the puck out of the Hogs zone after Lankinen stopped a Justin Dowling attempt. Making his way to the opposite coast, Johnson maneuvered between the circles and passed to Henri Jokiharu.

Jokiharu’s shot rebounded off the pads of Texas goalie Phillipe Derosiers, where Johnson had first dibs. The putback was denied, but Jacob Nilsson finished off the scoring play by knocking the puck across the border and into the city. The game was tied at one 2:37 into the second.

The Stars responded with a pair of power play goals of their own to build a 3-1 advantage. Travis Morin added to his hefty scoring totals against Rockford at 6:51 of the second, while rookie Joel L’Esperance put in his league-leading 27th goal of the season 3:31 into the third period.

The IceHogs rallied for a Viktor Ejdsell strike with Lankinen on the bench at the 16:51 mark, but Rockford ran out of clock before they could finish the comeback.

In what just may have been the game to see at the BMO this season, Rockford erased a four-goal deficit in the last 21:32 of action. The Hogs triumphed over the Wild to break a two-game skid in exciting fashion.

The Wild skated into the first intermission with a 1-0 lead courtesy of Brennan Menell’s deflection of Cal O’Reilly’s shot 18:36 into the first period. Goals by J.T. Brown and Sam Anas in the first two minutes of the middle frame had the IceHogs reeling and down three. A Gerald Mayhew tally 16:34 into the second had Iowa leading 4-0 and the outcome seemed academic.

The rally started on a late power play chance, after William Pelletier was cross-checked by Iowa’s Michael Kapla. Luke Johnson won the subsequent draw, with Jacob Nilsson sliding the disc to Jordan Schroeder in the high slot. The offering beat Wild rookie Kaapo Kahkonen’s glove and caught the upper right corner of the net at 18:28 of the second period.

Down 4-1 to start the third period, the piglets came out with some urgency for the first time all evening. Johnson got to the left post to redirect a Henri Jokiharu blast into the Iowa cage 4:38 into the third period. The secondary assist was given to Andrew Campbell, who made a nice play to keep a Wild clearing attempt in the offensive zone.

Midway through the third, Nilsson dropped the puck off to Jokiharju, who skated to the right corner of the Iowa zone and center to Schroeder for his second goal of the night. With 9:10 left in regulation, the Hogs had cut the lead to 4-3.

The much-anticipated equalizer came after Rockford had come up short on a power play. After the Wild’s Mason Shaw came out of the box. Viktor Ejdsell withstood a hard check along the half boards to keep possession. Andreas Martinsen got clear with the puck and sent a pass across the ice to Joni Tuulola at the left dot. Tuulola’s shot cleared the blocker of Kahkonen and rattled into the net at the 15:59 mark.

Neither team could breach the opposing goal in the remainder of regulation or overtime. This comeback would have to be completed via the shootout. Jokiharu and Schroeder were stopped by Kahkonen. Sam Anas and Dimitri Sokolov were denied by Rockford goalie Kevin Lankinen.

Ejdsell’s third-round attempt would be the pivotal moment. The shot met Kahkonen’s pads but still retained the giddy-up to slide across the goal line. Mayhew’s attempt was snuffed out by Lankinen and the BMO erupted in celebration.

The IceHogs won their second straight game, closing out a six-game home stand with a 4-2 mark.

Rockford got the first goal of the game late in the opening period. Nifty backhand passing by William Pelletier and Andreas Martinsen set up Luke Johnson coming across the Rampage crease. Johnson was able to wait out San Antonio goalie Jared Coreau and slide in his eleventh goal of the season at the 16:33 mark.

The Hogs doubled the lead early in the second period when Dennis Gilbert got off a long pass to Jordan Schroeder coming into the Rampage zone. Schroeder skated to the right circle and let fly with a lamp-lighter for a 2-0 advantage at the 1:02 mark.

San Antonio got a goal back at 3:54 of the period when Adam Musil sent a shot past Rockford goalie Kevin Lankinen. A couple of minutes later, Mitch Reinke sent a shot off of Lankinen. Joey LaLeggia got a hold of the rebound and banked in the equalizer off of the Hogs rookie.

The score remained knotted at two through the second intermission, until the IceHogs got a goal from returning defenseman Brandon Davidson. Davidson crashed the Rampage net to follow up on a Nilsson attempt. Collecting the rebound, Davidson stuffed the puck past Coreau at 4:51 of the third period to put Rockford up 3-2.

San Antonio went with an empty net for most of the final minutes, allowing William Pelletier and Nick Moutrey the chance to send the BMO faithful home with free Culvers and wrap up a weekend sweep.

If the feeling moves you, follow me @JonFromi on twitter for news, updates and thoughts on the IceHogs throughout the season.