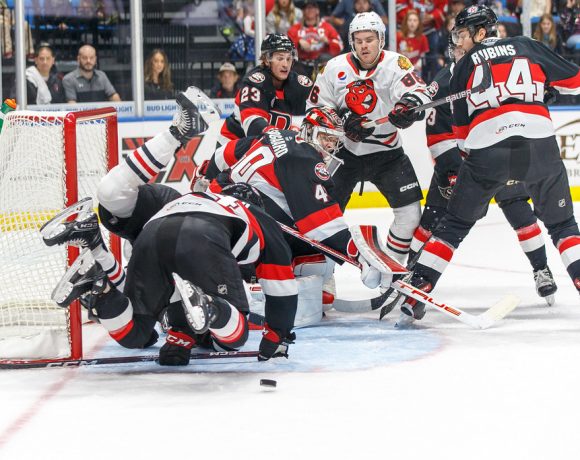 Back before the Rockford IceHogs home opener the previous weekend, I predicted that the scoring potential of this veteran-laden team would result in a slew of goals. Rockford put up four goals in a pair of losses at the BMO Center.

Turns out I was just a week off. The piglets were flying around the BMO ice this past weekend, and the offense came out to play.

The Hogs sent 13 shots to the back of opposing nets in a pair of wins, beating the Wolves 5-3 on Friday, then clobbering the Belleville Senators 8-2 on Saturday night. Rockford evened up its overall record to 3-3 while racing up the AHL offensive leaderboard.

It wasn’t all sunshine and rainbows; the IceHogs are dangerously thin in their own cage. That situation may have become exacerbated with an injury to rookie Jaxson Stauber that may take a few days to evaluate.

Stauber took a puck to the mask in the second period in Saturday’s win that stuck in the eye hole. He left the game under his own power, but his immediate status is unknown. Regardless, the organization needs to address the lack of a veteran backstop for Rockford.

The Best Line In The AHL?

You could definitely make an argument that David Gust, Lukas Reichel and Brett Seney have been the league’s most effective forward line. They certainly are the hottest.

Gust had a tremendous weekend, following up a five-point effort against his former team with a pair of assists against Belleville. He’s tied for second in the league with eleven points (3 G, 8 A).

Goalie Depth Stretched To The Limit

Jaxson Stauber took a puck to the eye in the second period of Saturday’s win. After stopping seven of eight Senators shots, Stauber left the contest and did not return. Dylan Wells came in for the remainder of the game. Although he gave up a goal, he denied sixteen shots. The evening before, Wells picked up the win over the Wolves, stopping 24 of 27 shots.

Assuming that Rockford isn’t going to post five or six goals every night, the Hogs are dangerously thin in net at the moment. With Arvid Soderblom up in Chicago with the Blackhawks for the foreseeable future, the potential of Stauber missing some time does not give Rockford much experience in the crease.

Wells has 25 games of AHL action in four professional seasons. Stauber was removed from just his third AHL start when he was injured. In hindsight, the Blackhawks organization may have wanted to pick up a veteran who could have slipped through waivers and floated back and forth from Chicago to Rockford when needed.

If Stauber isn’t ready to play by Rockford’s game with Milwaukee Wednesday, expect Mitchell Weeks to be recalled to the IceHogs from the Indy Fuel of the ECHL. Weeks is 3-0 for Indy, with a 3.00 GAA and a .899 save percentage.

The IceHogs broke a three-game skid in a big way Friday night.  With a pair of goals and three helpers, Gust factored in on every Rockford goal in the victory. Rockford picked up its first win this season at the BMO Center, thanks in part to a flurry of second-period goals.

The Wolves started strong, taking a 1-0 lead midway through the first on an Alexander Pashin tally. Rockford created some scoring opportunities late in the period but trailed by that score heading into the locker room.

The goal that got the Hogs rolling came off the stick of defenseman Jakub Galvas, who drove to the right slot and went far side on Chicago goalie Zachary Sawchenko. This tied the game at a goal apiece just 2:12 into the middle frame. Gust gave Rockford a 2-1 lead at the 6:15 mark, taking a pass from Brett Seney before splitting the defense and backhanding the puck into the Wolves net.

Chicago knotted the game at 8:39 of the second period when Nathan Sucese put back a long rebound of a David Ferrance attempt. However, the IceHogs responded by capitalizing on a Wolves turnover in their own zone. Mike Hardman deflected a pass attempt to Gust, who sent a shot from the slot past Sawchenko at 14:30 of the second.

The key sequence in the contest came in the closing minutes of the period. With 1:27 remaining, Max Lajoie appeared to tie the game for Chicago. The officials, however, ruled that Lajoie had knocked in the puck with a high stick, disallowing the goal. Rockford took full advantage, getting a deflection of a Galvas shot by Seney with two seconds to play in the second. This gave the IceHogs a 4-2 advantage at the second intermission.

An Alec Regula slapshot 25 seconds into the third period provided plenty of insurance. The Wolves Jamieson Rees closed out the scoring a few minutes later, but the Hogs held on behind Dylan Wells, who picked up his first win in net with 24 saves.

After scoring five times in a win over Chicago on Friday, Rockford erupted for eight goals at the BMO Center.

The IceHogs got to work early, scoring 51 seconds into the contest with Dylan Sikura‘s first goal of the season. Less than a minute later, Lukas Reichel worked a two-man rush with Brett Seney and scored from the right post to put the IceHogs up 2-0.

Sikura got his second of the night at the 11:36 mark of the first period, the first of what would be four Rockford power play tallies. The one-timer from the top of the left circle trickled through the pads of Senators goalie Kevin Mandolese, prompting Belleville coach Troy Mann to remove him from the game for Mads Sogaard.

Belleville, who was outshot 9-1 by Rockford, stopped the bleeding and went into the locker room down 3-0. Instead of a push back from the Senators, the Hogs turned the offense up a notch.

The middle frame was a wild affair. Rockford put up four goals in the span of 2:15, starting at the three-minute mark with a power-play goal by Alec Regula. Buddy Robinson (PP), Carson Gicewicz, and Reichel quickly followed suit.

Mann removed Sogaard from the action after Reichel’s second of the evening in favor of Mandolese. it didn’t mater. Mike Hardman quickly sent a shot off the right post and into the net at the 7:40 mark.

Jake Lucchini broke up the shutout with a goal at the 11:03 mark, but Belleville trailed 8-1 at the second intermission. From there, it was mostly the teams trying to run out the clock and the officials trying to prevent garbage-time fights. Angus Crookshank converted on a power-play chance midway through the third to close out the scoring.

The piglets will rise early to take on Milwaukee in a 10:30 a.m. start on Wednesday. After getting its first gander at the Admirals, Rockford ends the seven-game home stand Saturday and Sunday. Saturday at 7:00 p.m., the Hogs open the season series with Grand Rapids. The following afternoon, the Iowa Wild visit the BMO Center for a 4:00 p.m. puck drop.