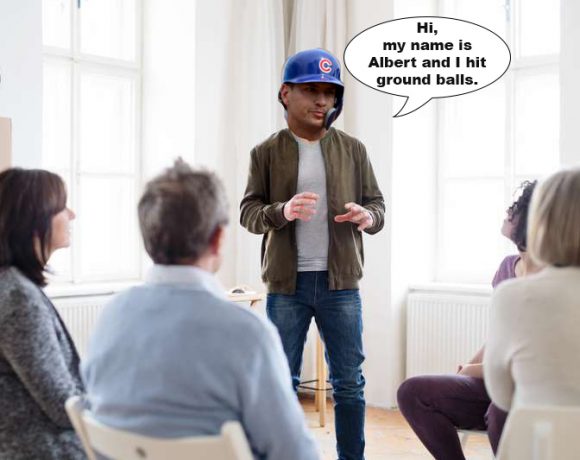 Perhaps we should have known things would go a little backwards on the Cubs in time when this regime’s first ever draft pick turned out to hit a bunch of ground balls, didn’t walk much, and was surprisingly slow. Kind of everything they told us they wouldn’t do when they walked in the door. Albert Almora has probably blown his chance to be a full-time centerfielder here. But he still very well might have a role to play with this team, and maybe as a part-time player he could possibly flourish. He’d hardly be the first. That’s the hope, anyway.

Almora had simply a disaster of a season, which caused Jason Heyward or Ian Happ to play much more in center than anyone had anticipated. And Almora can’t argue he wasn’t given a chance, because he was basically given the starter’s share of ABs in the first half…and he grounded it to short. And as we know, Almora isn’t going to beat anything out. Even his defense fell, though few believe that’s his permanent state. It was only a year ago he was worth 3.4 Defensive Runs, so that’s probably an anomaly. The Cubs aren’t counting on him now other than to relieve Heyward or Schwarber the duty of hitting against lefties once or twice a week.

YES! YES! YES!: We’re already getting “Best Shape Of His Life!” stories out of Arizona, as well as comments on how we’ll he’s hitting. Which means dick, because Almora has looked good in spring before. The first objective for Almora is to stop hitting the ball on the fucking ground. He’s seen over half of his contact turn the ball green the past two seasons, and you can’t make a living that way. The problem for Almora is at least last year, when he did hit the ball in the air he didn’t hit it very hard, leading to a .184 average on flies. I feel like we’re getting to that point when Homer was training as a boxer and Moe told him, “Ok, maybe punching isn’t your thing.”

Perhaps the commentary on the shape Almora is in is to increase the authority with which he hits everything, and that can only help. Really what Almora has to do is just be a line-drive hitter. He’s not going to bash 20-25 homers but spraying liners all over could see him get back to near a .300 average which he’s teased before. And he has to hit around that to be productive, because he probably isn’t going to walk much. Almora has never had an excessive line-drive rate in the bigs, but that needs to be the goal.

As you might expect with someone who hits the amount of grounders Almora has, he struggles with pitches on or just off either corner and below his waist: 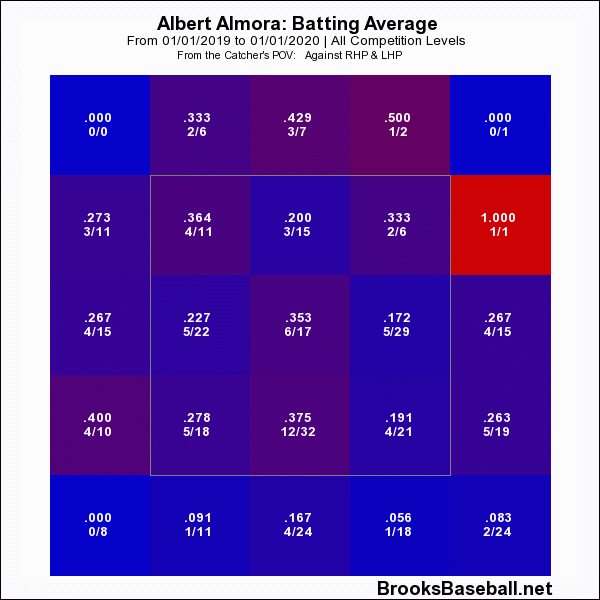 So lifting those pitches is paramount, and Almora is already good at the top of the zone. That appears to be the crux of his work in the spring. Almora has also said he was in a bad mental place last year, which is fair enough. Getting to the ball more directly is a good idea, as coming out and around it was causing his grounder problem (same thing for Heyward in the past).

Almora had a rough go last year against lefties, but that was just part of the whole detritus. In the past he’s been more than effective against them, and only seeing them at least to start the season could be a boon.

YOU’RE A B+ PLAYER: Every spring is littered with stories about a guy being in better or different condition, or changing his swing or approach, or how well he’s doing in games that don’t count. This used to be Jason Heyward’s territory. Obviously we’re not going to believe it until we see it. If Almora can’t lift pitches low in the zone for at least line-drives and continues to pound things into the ground, his Cubs career is pretty much going to be over. He’s also going to need to improve his defense from last year, though that’s the easier task for him. He’ll see a lot of late-inning action out there with Happ sliding over to left when the Cubs have a lead.

Dragon Or Fickle?: I would guess that if Almora is restricted to only platoon-duty, with the occasional spot start else well, and no one gets hurt to force him into the lineup every day, he can basically be David Bote – Outfield Version. Which means he’ll be fine. Nothing more, nothing less. I don’t think his defensive game is going to be a minus again, because his instincts out there are just so good even if his feet aren’t all that quick. And mostly playing against lefties, he should be able to be average or more. And maybe that’s all he is. Maybe he forces his way into more playing time. But if he earns that, he earns that.