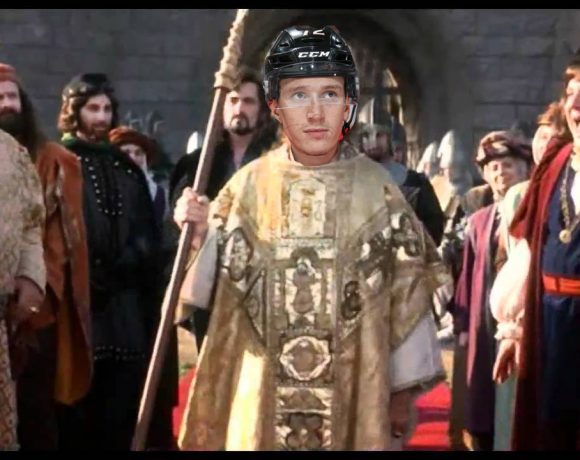 Ok it doesn’t really work. But we’re going with it.

In the scorched-Earth-covered-in-manure season and situation that the Senators have found themselves in, the one flower springing from it all has been Thomas Chabot. Whether the Senators meant to or not, they’ve found themselves a d-man they can build around. Shame they have to do ALL the building, but you have to start somewhere.

Chabot was always pointed to this of course, being a first-round pick in 2015. Chabot is the rare defensive product out of the QMJHL, a league where most defenders are just watching forwards streak by them before putting up a touchdown or more on their confused and lonely goaltender with shoddy skin. Chabot was a point-per-game from the blue line there, and made the Senators the year before last. He put up a respectable 25 points in 63 games in his rookie year. Come on, Nicholas Beaudin!

This year it’s exploded. He’s already got 33 assists and 44 points for a Sens team that struggles merely to breathe. More impressively, his metrics are some of the best in the league. His relative-Corsi is second in the league among any d-men, including being just ahead of Erik Karlsson. He’s 10th in the league in relative-xGF%, again just behind Karlsson (and some real randos, to be fair). The level at which Chabot is pushing the play above what his team does when he’s not on the ice is striking.

Sure, Chabot has some help. He’s getting cushy zone starts, as only him and Chris Wideman are getting more offensive zone starts than not on the team. He and Wideman are also getting the easiest competition, basically a third-pairing, bum-slaying role. Which is exactly how you bring along a d-man barely out of his teenage years. Wouldn’t it have been lovely if the Hawks could have done the same with Henri Jokiharju?

The hope for the Senators, no matter the record, is that they can take Chabot, Maxime Lajoie, Ben Harpur, Dylan DeMelo, and one or two others and roll with them for years. None are older than 25 at the moment. And they’re going to have to because as you probably know, the Senators don’t have a first-round pick this year and it very well may be top-three. They could have added to this.

Sadly, the Sens look bereft up front, other than Brady Tkachuk and his never-closing mouth. Colin White might be a middle-six player one day, but that’s it. The Senators are aiming to be the Hurricanes, with a great blue line with nothing ahead of it. It’s…a plan?

The Sens might not have much. In fact, they have startlingly little. But at least in Chabot there’s a start of something. Mighty oaks from little acorns and all that. If they can cash in on Matt Duchene and Mark Stone to the extent they should, and maybe one or two others, it’s at least a launch point.

But then, this is the Senators after all.