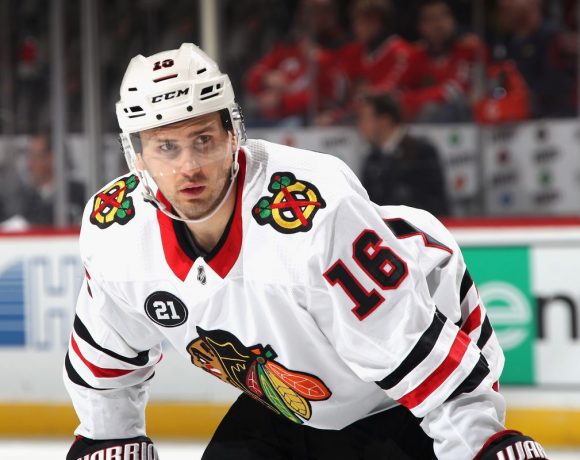 The Doll’s Trying To Kill Me And The Toaster’s Been Laughing At Me – FFUD’s ’18-’19 Player Reviews: Marcus Kruger

The Hawks love a revival tour, and they tried it again this season with Marcus Kruger coming back from Arizona in the Vinnie Hinostroza deal. And like pretty much every other time they’ve done this, the reunion tour isn’t as good as the one you remember from your youth. “Cold Gin” sounded different in 1978, y’know?

It Comes With Free Frogurt!

The thing with Kruger is it wasn’t bad, but even when Kruger was really good it was in a way you had to really pay attention to notice. Defensively, Kruger was fine. He was ahead of the team’s expected-goals rate by some margin, and he did that playing both wing and center. He’s not the possession-monster he used to be when he was first here even while taking the dungeon shifts, and Coach Cool Youth Pastor was more hesitant to dump him in the deep end than Quenneville was. For a fourth-liner, Kruger did basically what you’d ask, which is keep the puck at the other end. But it was more fourth line this year than bonus checking line which it used to be. Still, when you look at his relative numbers defensively he was way ahead of the team.

I suppose to complain about anything that Kruger did is viewed through the prism of his cost, which is the contract the Hawks gave him in the first place. You don’t pay checking centers over $2.5M per year, but that’s not Kruger’s fault. He’s never provided much offense despite not being completely stone-handed. Among the forwards, Kruger was one of the worst penalty-killers, which used to be his forte. He didn’t win as many faceoffs as he used to, not that anyone should really care about that. And he looked a touch slower, and in a league getting faster and faster you wonder how long it is until that looks decidedly more noticeable.

Interesting one here. What Kruger used to do, David Kampf does now. And probably faster. And they need another center to slot ahead of Kampf anyway. So are you paying Kruger to be a winger? Would you do that for a $1M or so? There are probably better wingers out there to sign for that, or let some kid do it, or let someone slot down from higher in the lineup like Caggiula or Perlini if you sign wingers to play in the top six. And even if Kampf were to get hurt, they’ve been selling Caggiula as a future center and could certainly get you out of a week or two as a 4th line one. Kruger’s contributions to the last two Cups were bigger than he’ll ever get credit for, but the idea here is that the Hawks are supposed to stop working on nostalgia. Thanks for the memories, Dream Warrior, but it’s probably time for everyone to move on here.