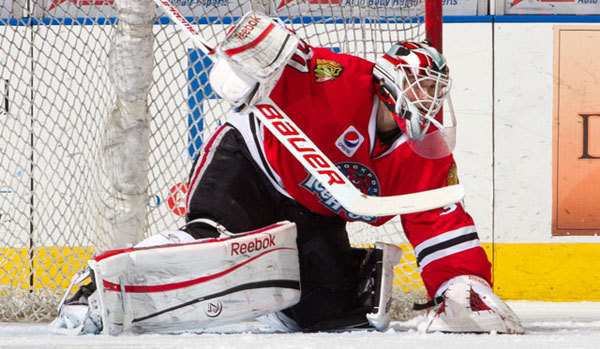 It was not a good weekend for the Rock River Bacon Bits. Two losses, one in overtime,  meaning it’s been four in a row now. Oh, and their coach is calling out some of the players in the press (or to Chris Block, but he’s more press than anything in the city these days).

It started well on Friday north of the border, the Illinois-Wisconsin border that is. 40 seconds into their tilt with the Admirals, Nick Leddy scored. But as it always is with the Hogs, the penalties they take cost them, and the ones they don’t cash in on cost them. A dumb roughing infraction from Wade Brookbank, and then a Brandon Saad high-sticking double minor saw the Admirals into the lead before the 1st was over. Both PP goals came from Gabriel Bourque and were off of scrambles in front of the net, in case you thought the Hogs were any better at clearing the crease than the Hawks. Oh and the Milwaukee power play was one of the worst in the league before this night.

The Ads 3rd goal was also off a scramble, complete with the Nick Leddy mouth agape staring that we’ve become accustomed to here. But as the Hogs normally do, they showed some spunk to get back into a game they had gotten themselves out of. Brandon Saad started it at the end of the 2nd, and after some relentless Rockford pressure Marty St. Pierre tied it up off a pretty sweet feed from Brandon Bollig of all people, one-timing it home from the left circle.

In OT though, Brandon Pirri got pick-pocketed as his own circle, which led to Kevin Henderson surprising Carter Hutton and sweeping one by him. Whatever a Kevin Henderson is.

It wasn’t much better the next night back home in Winnebago County. The Hamilton Bulldogs, the worst team in the AHL, walked out with two points. But when you defend like you’re being attacked by the Ninja Turtles, any team can beat you.

Adam Clendening, Klas Dahlbeck, and one or two others were guilty of egregious giveaways that either let Michael Blunden in alone or set someone up in the slot to pound home. Carter Hutton wasn’t very good either, and got yanked. St. Pierre tried valiantly to bring them back, but Clendening fumbled a won faceoff at the Hamilton blue line to allow the empty-netter. So a one point weekend was all it was.

-If you follow Chris Block’s twitter feed, you would have seen quotes from Ted Dent calling out the upper caliber of players on his team.

“I think we have some guys that got to pick up their game for sure. Especially some of the guys that are supposed to be playing in Chicago if the NHL starts. They’re going through the motions some nights and its not working out too well.”

It wouldn’t be too hard to figure out who he’s talking about. Nick Leddy has been half-in half-out all year. After a good start, Marcus Kruger might be getting depressed about not being in Chicago, as he hasn’t done much either despite scoring on Saturday. Dylan Olsen can’t even get in the lineup regularly, and even when he does it’s as a 7th d-man. Andrew Shaw spends more time trying to pick fights than getting to the net, and Block think he’s mentally off.

Saad and Morin aren’t part of this discussion, and neither is Ben Smith as he’s the only one other than St. Pierre scoring. Though Saad and Morin could probably be a little more consistent. Either way, none of it is good.

-Shawn Lalonde seems really intent on fighting this year. He had 100 PIM last year, so I guess this is part of his game? But seeing as what his skills are and what he would project as an NHL (if he ever gets there), it’s a curious choice.

Anyway, the Hogs remain in 1st place, but Grand Rapids have four games in hand. The Hogs return to Milwaukee Wednesday and Friday, before returning home to face best in the league Abbotsford.