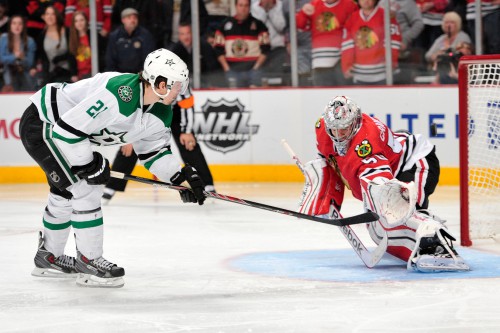 We should all be aware of this now. This isn’t the last game the Hawks will loose in truly goofy circumstances. Maybe the Avalanche loss kind of falls into this category, but not nearly as deeply as tonight. When you outshoot a team 50-18, and keep the play in their end for seemingly 7-8 minute blocks, I don’t know what else you can do. That’s not to say the Hawks were perfect, but obviously these are Kari Lehtonen’s two points.

While watching this one I couldn’t help but think of the phrase “drunk on power.” Because that’s what it felt like the Hawks were. In some ways that’s a good thing. They didn’t intentionally fall down three goals, but they certainly never looked like they thought they couldn’t pull it back instantly. I feel like all the revivals on the road trip have the Hawks feeling like there’s nothing they can’t overcome, which is good. But it also feels like that’s allowing them to be sloppy for stretches. Was there a d-man tonight not guilty of a boneheaded mistake? Maybe Keith. And yet they can always light a team up in a hurry when they need it, or it feels like that.

You can’t win them all. Sometimes the other team gets the bounces when you need and you don’t. Nothing to see here. Move on to the bullets.

Observation And Objectivity, The Two “Obs”

-I think every d-man other than Keith got benched tonight in the 2nd. Or it felt that way. Leddy did for chasing Nichushkin behind the net leaving Erik Cole alone in front. Hjalmarsson did for a penalty? Maybe? Not sure. This caused Brookbank to play defense in the 2nd, and I actually thought he was pretty good. And with a variety of partners (what a hussy!) Leddy responded with a goal. Hjalmarsson responded by falling down and giving up a penalty shot to Roussel. Different strokes for different folks. Strangely, Seabrook wasn’t benched for loafing back for a change with Nichushkin and Eakin charging directly up his ass. Hammer got out to just interfere enough and Keith’s gap got fucked up because of it, thus giving Nuke enough time to wire it between Crawford’s legs. Some nights it’s just not all there.

-Speaking of Roussel, I know most were quite pissed at his antagonistic celebration. I loved it. A true heel turn. Hockey could use more of it, honestly. Though it did seem strange after he got fed it by Shaw when Shaw couldn’t see anything. He’ll be an interesting player in this division for a while, no?

-For the power play goal against, and maybe this is a problem the Hawks are now having exposed because the goalies aren’t making all the saves, but Hossa and Toews did not close the lane at all. Toews didn’t pressure enough, Hossa didn’t have his shoulder (behind him but closing the lane) and Goligoski is always going to pick that. If the Hawks aren’t going to move the men in front of the net (and they’re not), they have to pressure the points more than they are. That won’t solve everything, but it’ll solve some.

-Leddy, Sharp, and Hossa all had seven shots. I can’t remember if I’ve ever seen three Hawks with seven shots.

-I actually noticed Kris Versteeg tonight, so that’s a step up.

There’s not much left to pick at here. The Hawks did most things right, and the only goal Crow would probably like back is the first. He wasn’t going to remain perfect on penalty shots forever. On to St. Paul.