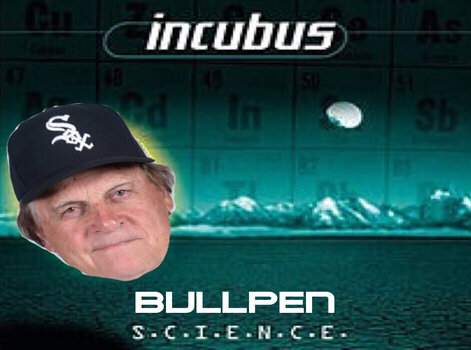 That was quite the Buzzkill.

The Sox came into the series with the Evil Empire with the best run differential in the entire league, and left it with merely the 3rd best behind the Dodgers and Padres. Since the 16 run skulling of the Twins last Monday, the Sox have only managed a measly 11 runs in that span. In those 5 games they’ve hit into 6 double plays, one triple play, and stranded 36 runners on base. Not the kind of baseball you’d expect from a team with deigns on the postseason, and the schedule doesn’t get any easier with the NL Central leading Cardinals coming to town tomorrow.

If Rick Hahn takes anything away from this series against the Yankees (That very well could be a 1st round playoff preview come the beginning of October), it’s that an OF containing Adam Eaton, Leury Garcia, Andrew Vaughn and Jake Lamb is just not going to get it done from here on out. Lamb, Garcia and Eaton have all been sub-replacement level since the beginning of May and Vaughn (while making a nice diving catch again Saturday) has made some mistakes out there as part of his learning process.

It would behoove Hahn to make a move sooner rather than later, as there are a few right fielders out there just waiting to be poached from the Mariners and Rangers. I personally don’t want to dip into what is a pretty shallow talent pool in the farm system to spackle together a functional outfield, but when you go cheap in the off-season this is the price you pay when the shit hits the fan.

-As mentioned above, what was the best run differential in the league by a fairly large margin has now slid down to 3rd behind the Dodgers and Padres. What’s notable about that is both those teams also have a plethora of injuries to their OF right now, with names like Cody Bellinger, Trent Grisham, Mookie Betts, AJ Pollack all dealing with various maladies right now. Oh, and some guy named Fernando Tatis Jr tested positive for COVID. None of those teams had 1st basemen playing in left and right field on Sunday, however.

-Tony LaRussa had himself another rough weekend using the bullpen. He left both Aaron Bummer and Evan Marshall in way too long, used too much of Jose Ruiz and not nearly enough Michael Kopech and Garret Crochet, and he set Liam Hendriks up to fail on Sunday afternoon.

-Oh, and he started Jake Lamb in RF for the first time in his career on Sunday. Feel the excitement!

-Not helping the bullpen this weekend were Dylan Cease and Dallas Keuchel. Cease was cruising along fairly well on Saturday until a botched play by Andrew Vaughn in LF sent him into a tailspin and Keuchel was super inefficient Sunday, needing 100 pitches to get through 4+ innings.

-On the plus side, the long ball showed up on Sunday with Abreu, Grandal and Andrew Vaughn all going yard. Both Abreu and Vaughn’s dingers were well over 410 feet each, with Vaughn’s coming off noted abuser and all around shitbag Aroldis Chapman. You love to see it.

-Also, Carlos Rodon was fucking unhittable on Friday night. He went 6 innings, striking out 13 Yankees including this series in the 4th where he struck out the side (the side being DJ LeMahieu, Luke Voit and Aaron Judge). Simply nasty stuff, take a look:

Carlos Rodón, K'ing the Side.

White Castle Special with a side of double swords. 🍔🍔🍔🤮⚔️⚔️

-Next up is a series against the St. Louis Cardinals, fresh off their series loss against the North Side Baseball Club. The highlight of this series should be the pitching matchup on Tuesday night, featuring two former high school teammates in Lucas Giolito and Jack Flaherty.

The Cardinals are as banged up as the Sox are, and having as much trouble scoring runs as of late. With Lance Lynn, Giolito and Rodon going in the series, this should give the Sox the best chance to get back on track with hopefully 2 or 3 wins. With capacity now up to 60% in the stadium, here’s hoping to some quality crowds and some successful home cookin.