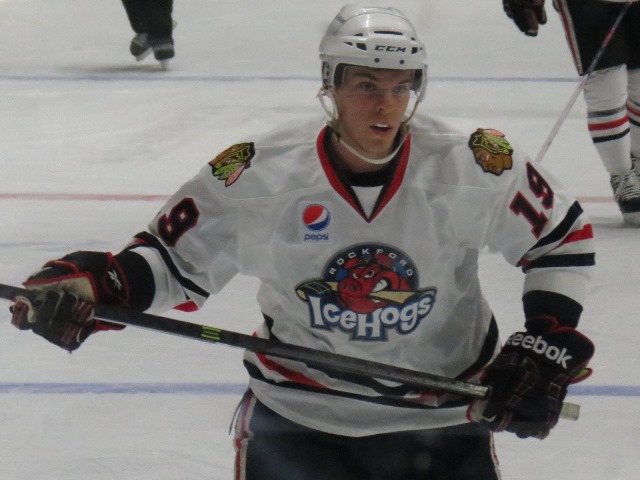 Friday’s tilt in Milwaukee featured a lot of offense between the IceHogs and Admirals. Including shootout goals, there were 13 pucks that found their way into the back of the net. After being tied up at five at the end of regulation, the Admirals converted on three of their four shootout attempts while the Hogs failed to convert at all. The Admirals took the coveted two points with a 6-5 shootout victory.

Rockford battled all game to either tie the game up or restore one goal leads. They received tallies from Jeremy Morin (x2), Brad Mills (x2) and Joakim Nordstrom. Jason LaBarbera was in net for Rockford and made 33 saves on 38 shots while Marek Mazanec made 24 saves on 29 shots for Milwaukee.

-The IceHogs scored on two of their five power plays; the second tallies for both Jeremy Morin and Brad Mills came on the man advantage. The Admirals tallied on one of their four power plays.

–Joakim Nordstrom, Pierre-Marc Bouchard and Terry Broadhurst were the shooters for Rockford in the shootout while Milwaukee sent out Mathieu Tousignant (goal), Taylor Beck (goal), Calle Jarnkrok (no goal) and Vinny Saponari (goal).

-Defenseman Adam Clendening and winger Jeremy Morin led the IceHogs with four shots on goal each.

-The scratches for the IceHogs were:  Viktor Svedberg (injured), Jared Nightingale, Pat Mullane and Theo Peckham (all healthy).

-The IceHogs now have a record of 30-24-5-4 (69 points). They sit in eighth place in the Western Conference standings and now have 63 games played.

*Chicago currently sits in fourth place in the Western Conference standings with a record of 35-19-5-2 (77 points) and have two games in-hand on Rockford.