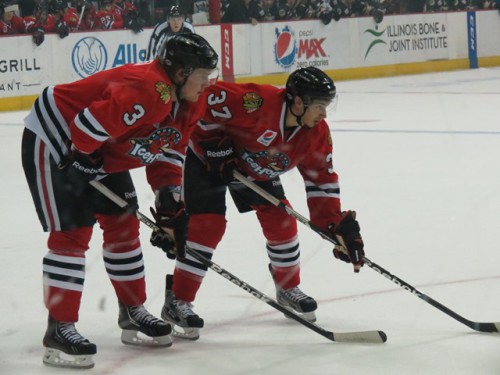 On Wednesday, September 25th, the IceHogs’ line-up against the Wolves was essentially all made up of guys on professional try-out contracts except for Mark McNeill, David Gilbert, Garret Ross, Alex Broadhurst, Pat Mullane, Kent Simpson and Mac Carruth.

The IceHogs took the lead in the first period with a 5-on-3 power play goal from Jared Brown, who was with Rapid City of the CHL last season. Mullane and Kyle Bodie—who was with Union College in 2012-13—had the helpers on the goal. The Hogs held the lead until there was 7:42 left in the second period when Matt Caria tied the game for Chicago. The Hogs battled back though and with 8:56 left in the 3rd period, Matt Lowry—who spent time with the University of Manitoba and Greenville of the ECHL in 2012-13—put home a loose puck to put the Hogs in front; Broadhurst had the primary helper on the goal.

The Hogs took the game2-1 even though Chicago outshot them 31-22. Simpson and Carruth split time in net during the game; Simpson started and Carruth replaced him with 10:42 left in the second period. Just like a typical Rockford-Chicago game, there were more than a few fights in this contest between guys on PTOs for both teams.

The worst part of the game for Rockford was when Gilbert went down with a lower body injury with 9 minutes remaining in the second period after he ran into the Wolves’ netminder at full speed as he was crashing the net.

-The lines and D pairs for the IceHogs in the game against the Wolves were:

–David Gilbert was the lone alternate captain for the Hogs.

On Friday, September 27th, Antti Raanta got the start in net for the Hogs against the Admirals as the Hogs dressed as close to a full line-up as possible. The only guy that was on a PTO that played was Maxim Shalunov. The game was a low scoring affair; at the end of regulation the score was tied at 1. Brad Winchester scored the lone goal for Rockford with Alex Broadhurst and Adam Clendening assisting on it. The game went into a 10 round shootout, but the Hogs dropped the game 2-1.

–Brad Winchester was an alternate captain for Rockford.

-Saturday, September 28 – The Blackhawks reassigned center Brandon Pirri and winger Jeremy Morin to Rockford from Chicago; they also sent down goaltender Antti Raanta after he was recalled to be Nikolai Khabibulin’s back-up in their last preseason game that night.

-Sunday, September 29 – The Blackhawks assigned winger Kyle Beach to HV71 of the Swedish Hockey League. According to this article on the team’s website, Beach will only be there for 3 weeks as the team has some injury problems, but we’ll see what actually happens.

-Monday, September 30 – Defenseman Ryan Stanton was claimed on waivers by the Vancouver Canucks. It’s a huge blow for the IceHogs, and the Blackhawks organization in general, because Stanton is such a solid defenseman and was part of the great depth the Hawks have on the blue line. He would have really helped the Hogs this season and surely would’ve been a contender for the captaincy. But, the AHL isn’t where Stanton belongs anymore. He’s NHL ready and deserves a shot in the show.

Sunday, October 6 at Texas at 5pm