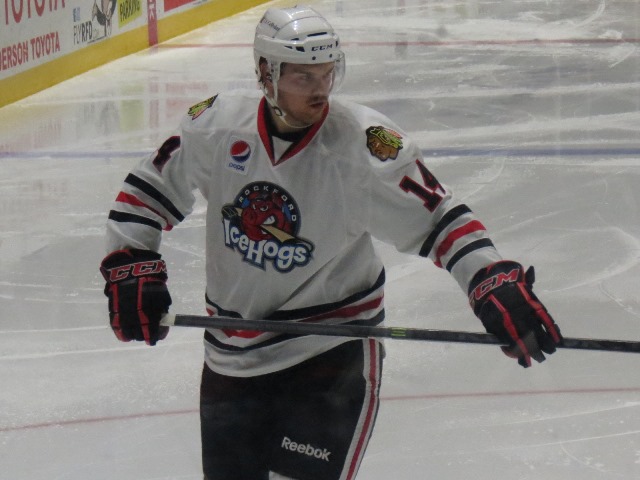 The IceHogs traveled to Grand Rapids for a midweek match-up against the Griffins on January 8th. Despite getting on the board first with a power play marker from Drew LeBlanc, the IceHogs fell behind 2-1 in the late stages of the 2nd period and couldn’t recover. Adam Clendening added a shorthanded goal for Rockford in the 3rd period, but they still dropped the contest 4-2; they killed their own momentum after the Clendening tally with penalties.

-The IceHogs scored on 1 of their 3 power plays and the Griffins scored on 3 of their 7 man advantages.

–Adam Clendening and Phillip Danault led the IceHogs with 5 shots on goal each.

On Friday, January 10th, the IceHogs hosted the Lake Erie Monsters at the BMO Harris Bank Center. The contest was a back-and-forth affair; whenever the IceHogs took the lead, the Monsters would find a way to tie the game back up not too long afterwards. Fortunately for Rockford, Garret Ross’ sick deflection of an Adam Clendening shot at the 17:37 mark of the 3rd period held up as the game winner; the final score was 4-3.

-The IceHogs scored on 1 of their 2 power plays and they killed off all 4 of the Monsters’ man advantages.

–Jeremy Morin, Drew LeBlanc and Adam Clendening led the IceHogs with 4 shots on goal each.

–Alex Broadhurst was awarded a penalty shot in the 1st period, but Sami Aittokallio made a pad save on his shot.

The following night, the IceHogs took on the Monsters again at the BMO and instead of a seesaw game, the home team dominated. The Hogs took a 3-0 lead by the 13:49 mark of the 2nd period courtesy of Brandon Mashinter, Jeremy Morin and Brett Skinner (PPG). Lake Erie got on the board at 14:44 to ruin Jason LaBarbera’s shutout bid, but the Hogs got the goal right back as Joakim Nordstrom’s backhanded shot from right out in front of Lake Erie netminder Sami Aittokallio went in for his 12th goal of the season. Mark McNeill and Pat Mullane added power play goals in the 3rd period to make the final 6-1 in Rockford’s favor.

-The IceHogs scored on 3 of their 5 power plays and killed off all 6 Monsters man advantage. The Hogs’ penalty kill was 10-for-10 over the weekend.

–Klas Dahlbeck led the IceHogs with 5 shots on goal.

–Garret Ross was a +3 on Saturday night.

-The IceHogs’ scratches, lines and D pairs were the same as Friday night.

–Monday, January 13 – The IceHogs loaned winger Maxim Shalunov to the Toledo Walleye of the ECHL.

-The line of Garret Ross, Joakim Nordstrom and Jeremy Morin has really been clicking as of late. All 3 players have been playing well and contributing offensively, which is something the club needs.

–Drew LeBlanc’s game has also picked up recently. He has been used on the power play, which is where he scored both of his goals, but he has also been working hard in all 3 zones to help generate chances.

–Viktor Svedberg looked like he hadn’t missed any time at all when he returned to the line-up on Friday night. He was used on the penalty kill and played a solid overall game all weekend. The Hogs’ blue line greatly missed his presence when he was gone and having him back is huge for the team as they battle for a playoff spot.

–Terry Broadhurst’s goal on Friday night was set up by his younger brother, Alex, during 4-on-4 play. Both of the Broadhursts have been playing well recently. They’ve been using their speed effectively and have been digging in the corners for pucks. They both went through a slump, both offensively and their overall games in general, but they seem to be out of that now that they both have some confidence.

-The IceHogs currently have a record of 18-17-3-2 (41 points) and sit in 8th place in the Western Conference standings.

Wednesday, January 15 vs. Abbotsford—which is underway right now. (11 am start)

Saturday, January 18 at Chicago at 7 pm