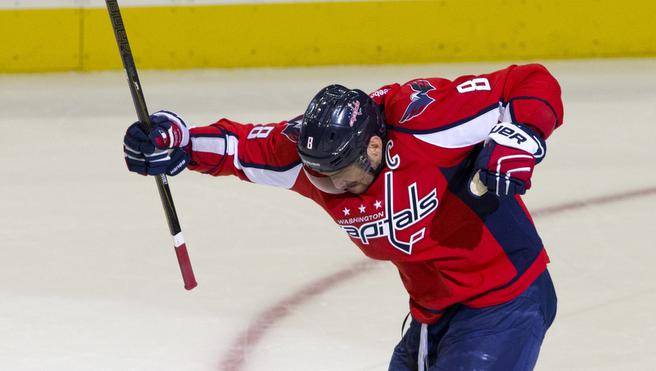 From last night’s editorial in the C.I.

You probably didn’t see it, because you were watching the Hawks on Sunday. But Alex Ovechkin’s 500th goal was a pretty cool moment. I can’t remember a time when the whole team spilled off the bench to celebrate a goal like that, but the Caps did for Ovi. It didn’t feel scripted at all. Just totally on impulse, they were so excited they had to be out on the ice.

It has to be some sort of vindication for Ovechkin, who has gone through more bullshit than a player of his quality should ever have to. Think about it, Ovi was the fifth fastest player to reach 500 goals. He was behind Gretzky, Lemieux, Bossy, and Brett Hull. Now think about the time those guys played in, the late 70s and 80s and early 90s. To think that Ovechkin has joined them… in some ways if you rate it we’re basically watching the best goalscorer of all-time, at least in relation to the era he played in.

Ovechkin, as was pointed out to me by McClure, has averaged the most shots-on-goal per game in history. Again, this is in an era where blocked shots are not just the norm but expected. Every team struggles to get shots, and Ovi does it with ease game after game, year after year. He just has a way of getting the puck through from whatever angle, and it’s almost always a dangerous shot due to its venom and his release. Certainly there’s no one out there playing the game in the way Ovi does.

But instead of cherishing what we have here, Ovi has had media and coaches for years tell him what he can’t do and what’s wrong with him. He didn’t backcheck hard enough. He didn’t want it bad enough. He only scores goals. This or that. Here we have at least the most unique scorer in the game today, and it’s always about what he’s not.

Have I been guilty of it? Sure have. Sometimes you fall into the noise. I criticized his sometimes one-way approach. Or that there wasn’t enough variance to his game. Sometimes I laughed at the backchecking GIFs you’d find on the internet (the one with the Xbox controller breaking is a personal favorite). I lost sight of what it is he does do, and how no one else is doing it or no one before has done it in quite the same way. You live and learn, I guess.

I wonder if that would be happening if he weren’t Russian. Phil Kessel would probably suggest it still would be, and maybe that’s true. It feels like hockey has the most instances where a coach tries to make his mark by going to war with the team’s best player. You just saw Tortorella chasing Ryan Johansen off to Nashville from the moment he showed up in Ohio. Somehow the coach always knows better, at least the bad ones do.

Sure, everyone points to Scotty Bowman changing Steve Yzerman’s game, though people forget the Wings actually traded Yzerman to Ottawa before a last minute nixing of the trade. And at the point that Yzerman was asked to change, he was in the later stages of his career and Sergei Fedorov had kind of passed him as the best player on the Wings.

Ovi has been fucked with in the prime of his career. It feels like he could have been even more if Adam Oates had a clue or Bruce Boudreau didn’t lose his mind.

The thing about Ovi is the joy has almost always been evident in his game. He looks like he just loves being on the ice, because he does. Crosby has sometimes looked that the game is a burden to him. Sometimes it’s the same with Toews. Ovi has always had that exuberance. How can you not be drawn in by that?

Does that exuberance get the best of him sometimes? Sure, he’s been guilty of some spotty hits in his career. Been too much in a hurry to assert himself physically, whether it was some misguided attempt to lead as captain or to bow to the pressure of being “a presence.” But I don’t know that I think of Ovi as a dirty player, certainly not in the same way I see the cheap shit Malkin and Crosby pull constantly.

Now, Ovi is the best player on the best team in the league, once again. And there he was capping 500 goals, which won’t be anywhere close to his career-ending totals. There was definitely catharsis in that moment. If the Hawks can’t do it again, I think I’d like to see Ovi get his. Maybe then all the narrative crap will stop. Though I doubt it.

I don’t know if it’ll be the same outpouring for Hossa when he gets there. He’s never been through that here in Chicago, where he’s basically always been appreciated. It’ll be more affirmation for Hossa. And that will be cool to see too. There was just more to it with Ovechkin. I hope we all appreciate what he’s doing.