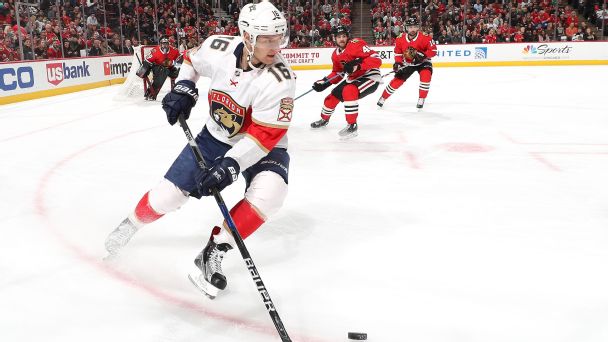 This one is a bit of a stretch, but we like stretching. Feels good, good for you, keeps you young. Seriously, go to a yoga class if you haven’t. Though preferably one with an instructor with good music taste. You don’t need more Enya-adjace stuff in your life. But you’d be surprised how many do. Anyway, I’m getting off track.

The Cats don’t need to trade Hoffman. They have $23M in space with the news today that Roberto Luongo is retiring. Not even LTIRing into oblivion, retiring. Which fucks over the Canucks a bit, which is highly entertaining if not gratifying, even if it’s because of perhaps the NHL’s dumbest rule–cap recapture penalties. So that means the Panthers have the space to sign both Artemi Panarin and Sergei Bobrovsky, and perhaps have a touch of space leftover. It’s probably more likely they’d try and find a home for James Reimer and find a cheaper backup, but again, they don’t really have to do anything. They don’t have anyone they have to re-sign in the next two years, unless they’re higher on MacKenize Weegar than anyone else is and he’ll be stupid cheap anyway. Dadonov gets a raise next summer, but not a huge one at 31.

Still, last season the Panthers asked Hoffman for his 10-team no trade list, so they have thought about it. And with Panarin on the way probably knocking him down to the third line, and with only one year left on his deal, it wouldn’t be the craziest thing to see Florida try and get something back for him.

And Hoffman is a perfect fit into the Hawks top-six, and is coming off a 36-goal season. He’s got that flexibility we love, as he can get you out of a stretch of games playing center if you need. He can play both sides, but has mainly been on the left. Now, that’s where the Hawks have a jam thanks to Saad and DeBrincat, but as we’ve seen Saad actually did his best work hiding on the third line in the weeds. Which could lead to a pretty effective Doomsday line of Hoffman-Toews-Kane if you so chose.

And Hoffman scores. Given an actual center in Barkov saw his numbers soar. In Ottawa he was either with overmatched players like J.G. Pageau or Derick Brassard or shoot-first guys like Matt Duchene. Meaning he had to create all of his own openings. Clearly he took to getting to finish off some others’ creations at times.

While Hoffman is only 6-0 he plays a bigger game than that which would satisfy the Hawks. What satisfies us is he can move too, and would seem to be the perfect blend of the two ideologies.

Financially, Hoffman is only signed for one more year, which means you can reset and see what you have when all is said and done. It also probably keeps his trade cost down a bit. Again, the Panthers have no need to trade him and might be all-in on this season to get back into the playoffs and trading Hoffman isn’t in line with that. Then again, it’s impossible to predict what our namesake Uncle Dale might do. He’s out-thought himself before.

Hoffman’s off-ice issues from last summer seem to have died down, and even if they haven’t that’s entertaining for us, which is all we’re after here.

What do the Panthers need? They probably don’t think much, but I’m no fan of their defense. They already have right-handed Gustafsson in Keith Yandle, except he can actually skate, so that’s probably a no-go. It would be truly cruel to send Connor Murphy back to Joel Quenneville, but perhaps without a point to prove to his GM this time around he might actually give our lovable Irishman a fair shake. If they’re into cost-cutting, one of your magic foursome on the blue line could do the job included with other things.

It’s worth a phone call, and it’s not like Tallon hasn’t dealt with the Hawks before. Even if he tells them to go fuck themselves first, which I’m sure he does.