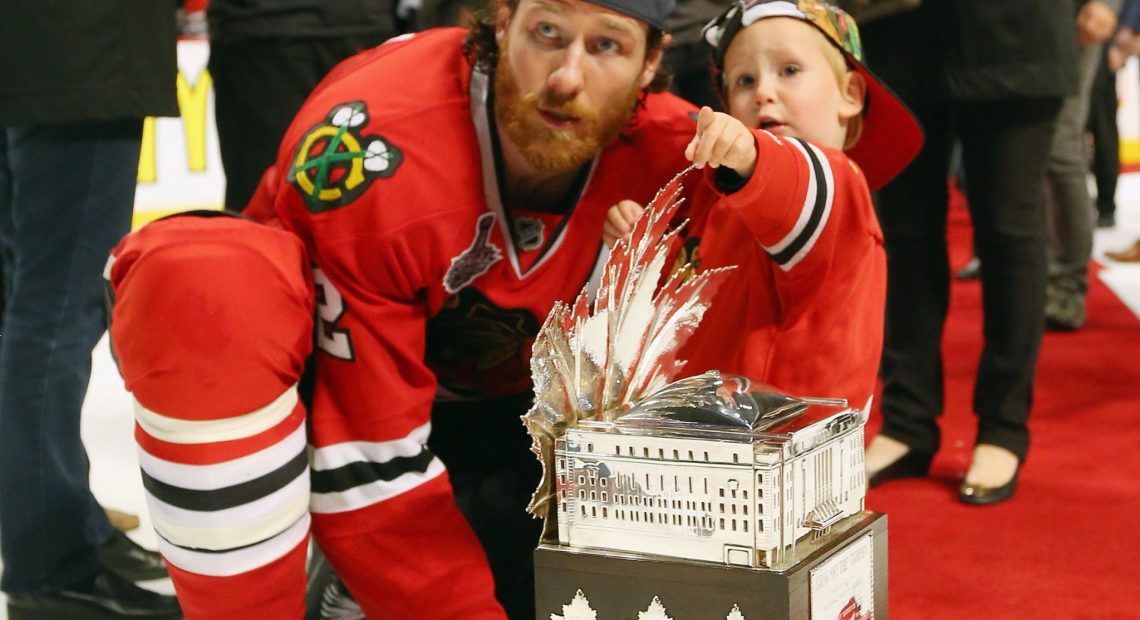 In retrospect, Duncan Keith’s exit was paved nearly three calendar years ago when Joel Quenneville was fired and Coach Cool Youth Pastor Jeremy Colliton was brought on to do whatever it is he’s been doing since. Keith had just turned 35 and the signs of wear were finally starting to show, and what that deterioration would look like was without true precedent, as the closest comparison to Keith has always been Scott Niedermayer, who retired at age 34. Adding to that fact was a coach whom Keith was older than and had zero respect for and his passive aggressive undermining bordered into outright contempt. At long last, what it finally took for Keith to ask out was a third straight year without a playoff appearance (sorry, the bubble doesn’t count and it never did) and yet another sex crime scandal for the Hawks for him to say “Fuck this” and want to finally be closer to his son, and the Hawks accomodated him in sending him to Edmonton for Caleb Jones (Seth’s kid brother) and a third round pick while moving his salary off the books.

There simply are not enough superlatives to lay upon Keith’s career, and again it’s equally as decorated as Scott Niedermayer’s minus the WJC that Niedermayer has under his belt 30 years ago. But with the Hawks Keith earned three Cups, two Norrises, two gold medals for Canada, and a unanimous Conn Smythe in 2015. The way Keith played the game however, was quite different than Niedermayer. Keith’s stride was far choppier, and basically all of his offense came as the result of his unbelievable defense. It has long been the lament of this outlet that Keith was never a natural power play quarterback, but that didn’t stop him from firing a million and one pucks into shin pads. His assissts came from breaking up plays at the Hawk blue line as opposing forwards were funneled there in the prime era by the relentless backchecking of Marian Hossa and Jonathan Toews, leaving Keith to knife the puck away if a forward tried to carry it across the line, or beat that player to the corner if they tried to dump it in. He was like a shutdown corner in football, just completely eliminating an entire side of the field. Keith also had a tremendous red ass streak both towards the press and on the ice. He made some vaguely sexist remarks when pressed by a female reporter in 2010, and flat out refused to be a part of McDonough’s PR (and coverup) machine by wearing team hats in locker room interviews. He nearly decapitated Daniel Sedin, Jeff Carter, and Charlie Coyle, receiving suspensions each time, so putting him now in the same division as the Canucks ought to be entertaining for everyone involved. And then there are all the rumors surrounding everything that transpired in 2015, some of the rumors of which are very not true, and some of them very much are.

But after all is said and done, Duncan Keith is more than likely the greatest defenseman in the history of the franchise, and one of the best to ever play the game no matter how his career ends in Edmonton. Chris Chelios might have been meaner, Doug Wilson may have scored more in the cocaine-addled and goaltender averse 80s, and Pierre Pilote might have been more graceful, but none of them did it all at once for so long, and when it mattered most. And the fact that he has asked out of this radioactive situation should not be held against him in the least going forward.

As for what the Hawks got in return, well, at least credit Bowman for not retaining any salary. The third round pick this year is a lottery ticket, and the Caleb Jones aspect of this is interesting and slightly disconcerting. As far as Caleb Jones the player is concerned, he’s 24 and has played a total of 93 NHL games with 5 goals and 14 assists for the Oilers, and has played 125 games in The A at Bakersfield putting up 11 goals there, so the offensive upside is tepid at best, and he’s certainly not the behemoth his brother is at 6’1″, 194 to Seth’s 6’4″ 215. But therein lies the intrigue. Clearly this is a precursor to making a full on push for Jones via trade, as he has asked out of flailing Columbus, with whom he has a No Trade Clause he can submit a list of 10 teams he does not want to go to. As John put it on twitter, this is Stan signing Yonder Alonso in the hopes of landing Manny Machado. As far as a player goes, Jones at 26 (27 in October) still should have plenty of time left being a two-way force and power play weapon as he has been to this point in his career, and is as legit a #1 defenseman as there is in the league, though playing in Columbus did nothing for his possession metrics. And with only one year left at a $5.4 mildo cap hit this year before hitting unrestricted free agency, he figures to be motivated. However, putting all of that into Jeremy Prinze Jr.’s absolute horse shit defensive “system” isn’t likely to improve any of those metrics, and that system is so bereft of any structure that even a player of Jones’ caliber can’t make any difference in team results. Furthermore, while no one should expect athletes to be great people or agree with them, the fact that the culture in Columbus was on the record as being so conspiracy-minded in the locker room that Pierre-Luc Dubois asked out of it is certainly not nothing, and Jones was one of the stronger voices in that room as a lettered alternate. A quick glance at the Jones’ social media feeds (along with their mother’s) backs that claim up, and is a very real concern as far as public health goes. But if nothing else has been made clear over the past 13 years, the Hawks clearly don’t give a shit about the greater good when there’s money and winning at stake. Either way, take all of this with a massive grain of salt.

In any event, farewell Duncs. It was a great run. See you at the number retiring ceremony.