High On The Hog: The Turnabout Of Collin Delia 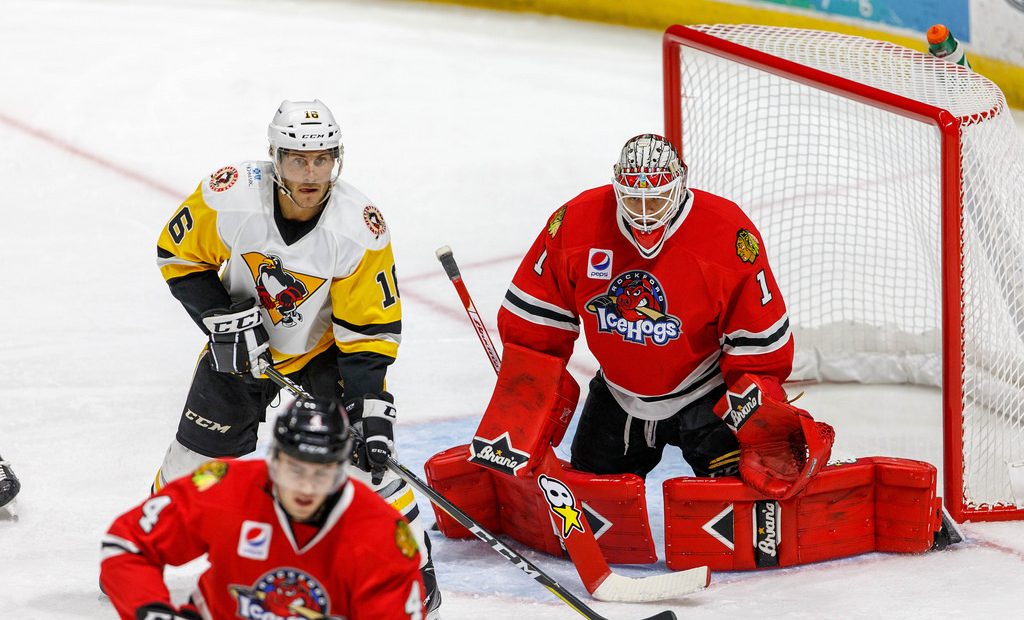 When the Rockford IceHogs contemplate their annual team awards in a few weeks, they can skip right by the most-improved player award. If Collin Delia hasn’t earned that honor from the team at this point, I’m not sure they’re qualified to give out awards.

The rookie goalie, signed to an entry contract by the Blackhawks back in July, has seen his fortunes undergo quite the transformation. For the first three months of this season, it couldn’t have gone worse for the former Merrimack standout.

These past couple of months, things couldn’t be better.

The 23-year-old Delia was flat out terrible for the Indy Fuel to start the 2017-18 campaign. I will admit that I didn’t have good vibes about his chances when he presence was required in Rockford following some injuries across the organization.

Why would I; Delia was 1-7-2 for the Fuel with a 4.12 GAA and a .887 save percentage. He looked like a baby deer in net in his first AHL in Iowa November 9. Oh, and he also hadn’t played at either the AHL or ECHL level in over a month when he got a second start against the Wild December 28.

A funny thing happened, though. Delia won that second start. After a few games, Delia started to settle in. The last few weeks, he’s been pretty solid in the IceHogs net, going 8-2-2 in the 12 games leading up to this week’s schedule.

This past week, he was flat-out brilliant.

Wednesday night, Delia stopped 38 shots, propelling Rockford to a 2-1 win over Texas. Saturday night, Delia shut out the Wilkes-Barre/Scranton Penguins, stopping 34 shots in a 3-0 Hogs victory (UPDATE-Delia was named the CCM/AHL Player Of The Week Monday). If Rockford is to get on a roll late in this season, it might just be with the California Kid manning the pipes.

Jeff Glass hasn’t been bad since being returned to Rockford last week. On the other hand, Delia has denied 72 of the last 73 shots taken at him and has won his last four starts. Makes sense to ride the hot hand for a while.

It has been fun watching Delia find his groove over the last couple of months. On a team full of young prospects, he’s come the furthest from the humble beginnings to his pro career this past fall. If Delia’s not the most-improved IceHogs player this season, someone upstairs isn’t watching.

Defenseman Robin Press, who is on an AHL contract with the IceHogs, has spent most of this season in the ECHL with Indy. On Friday, he was named the CCM/ECHL Player Of The Month for his play in February.

Press put up 16 points (5G, 11A) in 14 games and had a plus-seven rating during that time. For the season, he has nine goals and 24 apples in 38 games played. Press is the first defenseman to nab this monthly honor in the ECHL since 2003.

The 23-year-old converted forward has had limited appearances in Rockford over the last three seasons. He was scoreless in seven games for the IceHogs this season. In fact, Press has yet to register a point in 18 AHL contests.

Press is 6’3” and 210 pounds but hasn’t shown a real physical game in the time he has spent in Rockford. His defensive positioning has been an issue when I’ve seen him play at the AHL level. The Blackhawks have been intrigued about his potential, though not enough to get his name on an entry contract. However, his play in Indy suggests that Press might be worth consideration for a steady role in Rockford.

What’s That On My Screen?

As I am wont to do on a Wednesday night, I was in my basement taking in Rockford’s game with Texas. I called up the game on AHL Live a little late and tried to get into the swing of the game.

“Well, it’s not too bad,” I thought as I saw the score. “No score through the first half of the period.”

The key revelation in that anecdote is that I saw the score. For the first time in forever, the IceHogs had the score, time remaining and the period in the corner of the game broadcast. Rockford had finally provided this vital information for the interested viewer. Huzzah!

Of course, the scoreboard at (kind of) center ice at the BMO is currently on the fritz and doesn’t have that information, but I was in my basement, so who cares?

New Looks To The Roster

In last week’s post, I pointed out that Chicago could make a few paper moves to ensure that some of the current Blackhawks could take part in possible playoff action for the Hogs. That came to fruition, with the Blackhawks sending J.F. Berube, Carl Dahlstrom and David Kampf to Rockford until the trade deadline, when all three were duly recalled.

Also earning a call-up was Matthew Highmore, meaning that by NHL rules, the Hawks can only recall one more player this season, barring injury. That likely means that veteran players like Cody Franson, Adam Clendening and Chris DiDomenico will be spending the duration of the campaign in Rockford.

Lance Bouma was assigned to the IceHogs after clearing waivers; he skated in all three games this week and had a pair of helpers in Saturday’s win.

The IceHogs were a few minutes shy of grabbing points in all three games this week. However, they did win two of those contests. No lines again this week; I solemnly vow that I will have lines for next weekend’s action.

Rockford won its second game in a row behind a 38-save performance by Collin Delia, besting the Stars in front of a healthy weeknight crowd at the BMO Harris Bank Center.

The Hogs power play got things started 14:46 into the opening period on what has become a potent strategy. Chris DiDomenico threaded a cross-ice pass to Cody Franson, who was waiting at the left dot. His one-timer got through the open back door of Texas goalie Mike McKenna for a 1-0 Rockford advantage.

The lead doubled early in the second period. The IceHogs wove their way into the Stars zone with some crisp passing. DiDomenico wound up with the puck near the left dot and dropped a backhand pass to Luc Snuggerud in the high slot. He didn’t get all of the biscuit on his one-timer, but the change-up got the best of McKenna and Rockford led 2-0 at the 4:20 mark.

The Stars got back to within a goal in the 13th minute on a Greg Rallo goal after Delia gave up a rebound in front of the crease. However, that was the only rubber the rookie would allow past him on this night. The Hogs couldn’t come up with any insurance; thanks to Delia, they didn’t need it.

With points on the table, the IceHogs let the game slip away in the closing minutes. Rockford dropped a key game to a division opponent despite allowing just 12 Admirals shots on goal.

The penalty kill gave up an early goal, with Alexandre Carrier holding in a clearing attempt and finding Emil Petterssen at the right dot. The resulting wrister beat Hogs goalie Jeff Glass to the near side, giving Milwaukee a 1-0 lead just 1:29 into the contest.

Rockford got back to even ground with a power play strike of its own 4:44 into the second period. Cody Franson collected a rebound of a Tyler Sikura shot and flung it past Ads goalie Anders Lindback to knot the game at a goal apiece.

That’s the way the score remained until late in the final frame. The Hogs had limited Milwaukee to just seven shots in the first 40 minutes of action and had several scoring opportunities wind up in Lindback’s glove.

With just over five minutes remaining in regulation, Anthony Louis juggled a clearing attempt from Franson on the neutral side of the Hogs blueline. Not surprisingly, it wound up in the back of Rockford’s net. Frederic Allard did the honors, finishing the 2-on-1 created by the turnover.

Two minutes later, Petterssen’s shot from the slot was blocked by Luc Snuggerud and hopped into the end boards. Mark Zengerle chased it down before hitting a wide open Petterssen in front of the Hogs net. Glass couldn’t make the stop and Milwaukee now led 3-1 at 17:05 of the third.

Former IceHogs forward Mark McNeill put a lid on the proceedings with an empty-net goal with 1:31 left. Rockford had out shot the Admirals 25-12 but came out of this game with nothing but a bus ride back to Illinois.

Another impressive Delia effort in net provided the backbone of the IceHogs victory. The rookie from Rancho Cucamonga, California recorded his first professional shutout in front of a sell-out audience at the BMO.

All the scoring Delia would need on this night came on a pretty bit of puck movement by Rockford midway through the first period. Chris DiDomenico got the action started from behind his net, backhanding a clearing pass to Lance Bouma along the left half boards.

Bouma skated up the left side, crossed into Penguins territory and sent a pass all the way across the zone to Luc Snuggerud. Snuggerud backhanded a centering pass to Anthony Louis, who was skating hard to the front of the net. Louis redirected the pass past goalie Etienne Marcoux to finish off a nifty lamp-lighter.

The score remained 1-0 Rockford until the puck drop to start the third period. Tyler Sikura won the draw, Bouma sent it back to Cody Franson and Franson hit Andreas Martinsen as he was about to enter the offensive zone. Martinsen took care of the rest.

Maneuvering past two Wilkes-Barre/Scranton defenders, Martinsen battled his way toward the right post. With defenseman Kevin Czuczman draped all over him and with only his right hand on his stick, the big Norwegian somehow flipped the puck past Marcoux into the promised land.

At ten seconds, it was the fastest IceHogs goal to begin a period in the AHL history of the franchise. It put Rockford up 2-0 and in the driver’s seat for the rest of the way. Martinsen closed out the scoring with an empty-netter with 1:01 left.

Delia handled all 34 Penguins shots, including anchoring the Hogs penalty kill in six Wilkes-Barre/Scranton attempts. He was named the game’s first star, followed by Martinsen and Louis.

The IceHogs enter the most crucial portion of their schedule, starting Saturday night in Milwaukee. Rockford’s next ten games are against Central Division teams currently ahead of them in the standings.

Following Saturday’s tilt with the Admirals, the Hogs visit Chicago on Sunday. With chances to climb the division ladder enough to secure a playoff spot dwindling, Rockford has to consider each match-up a must-win.