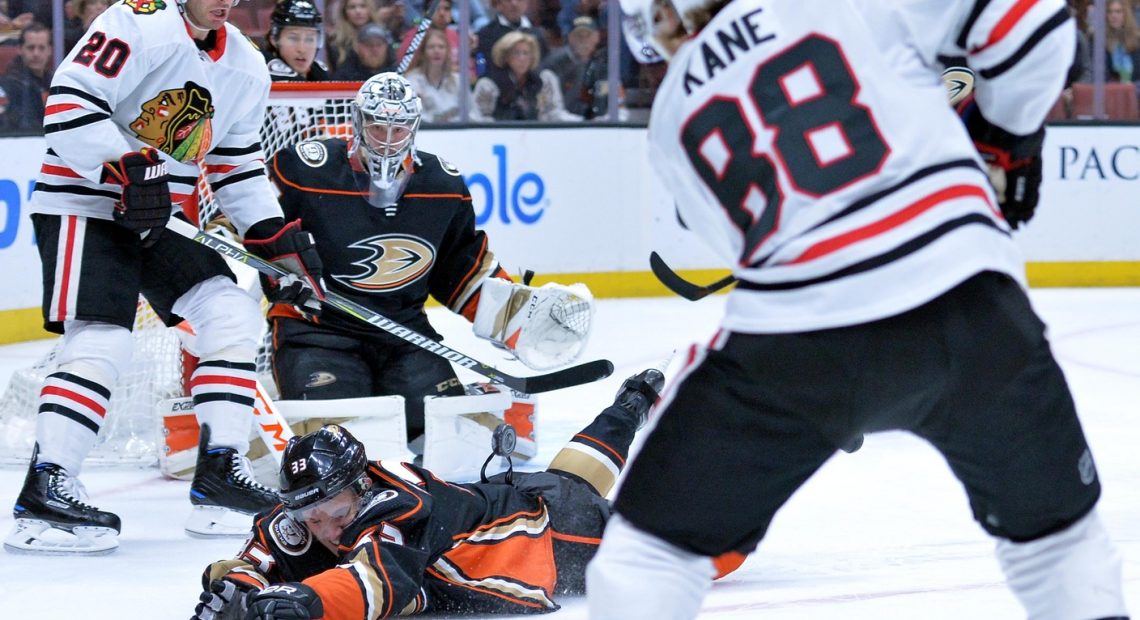 As is their way, the Hawks ricocheted from being interesting yesterday to incompetent today, managing to dig themselves into a hole from which light could not escape, much less their shitty offensive capabilities. To the bullets:

–Putrid defense put the Hawks down early. In the first Keith got beat on Rakell’s goal, and Jordan Oesterle went full-on Jordan Oesterle and just watched mesmerized as Corey Perry spin-o-rama’d around him for the second goal. On both Pettersson’s and Silfverberg’s goals in the second, I wished Forsberg would have had them, but he was being screened on the former and generally hung out to dry on both. Of course, Forsberg took the heat for all this and got pulled for Berube mid-way through the second. I can’t fault Q for that decision, but at the same time I can’t fault Forsberg for all those goals (winner: most well-worn line this season).

–The Hawks actually did show some life after the goalie switch. They ended the second with a 61.2 CF% and were beating the Ducks in shots thanks to sustained pressure late in the period. Tomas Jurco made himself useful with a couple shots and a redirect of Connor Murphy’s shot for their first goal. So it was nice that the Hawks felt nervous enough to actually try skating after Forsberg got pulled, but we should note that it didn’t come after another eventful moment in the second…

–…And that moment was the Toews-Kesler fight. Now, admittedly I was genuinely laughing out loud as this took place. Normally during theses GRIT HEART FART demonstrations I roll my eyes and complain, but the lack of physicality and the total uselessness of this “battle” was truly hilarious. It did absolutely nothing in terms of FIRING UP the Hawks—in fact they gave up two more goals while Toews was in the box, basically putting the game out of reach before it even got to halfway through the second. Amusing as it was, this fight encapsulated why fighting is dumb and pointless: it doesn’t make guys play better and it lands someone in the box for five minutes. Well done.

–Schmaltz’s first goal in the third was a good case study in persistence. It was also kind of a softie for Gibson, but whatever, I’m going to take what I can get. I’m hoping that as this LONG offseason proceeds, he works on his strength so that he can out-muscle backcheckers just like that all the time. Also, the play of that line (Top Cat-Schmaltz-Hinostroza) on the third goal was lovely, and gives me hope for the future after said offseason.

Whatta weekend, right? It’s been quite a time in California, but now the Hawks are coming home so they can fuck up at the UC for the next week. Now that we know what this season is, and we know what will not be happening come April and May, we can just innocently wonder what each game will bring, because as this road trip showed, you really never know with these assholes. Onward and upward.

Beer de jour (accurate for once as this game was de jour not de nuit): Furious by Surly Brewing (because no two adjectives could describe me better)

Along The Way I Had To Sell My Soul: Hawks at Kings Preview/Pregame Thread/Taste Test