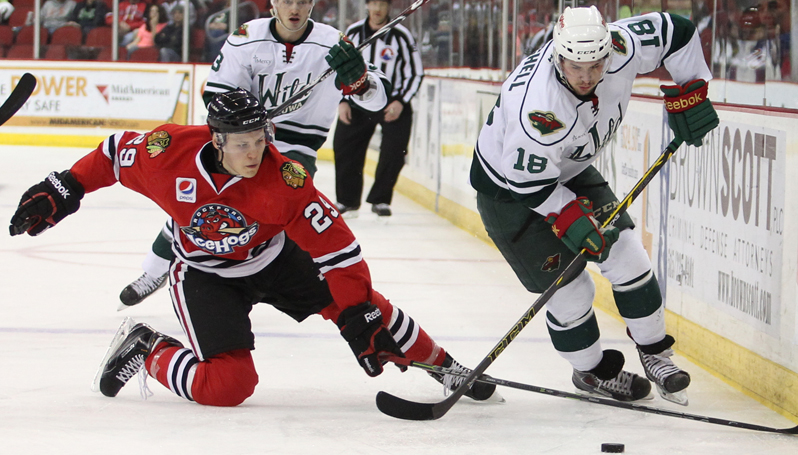 Rockford is 35 games into the 2015-16 campaign and currently sit atop the Central Division. This is shaping up to be the leagues most competitive division; right now the top four teams are within a couple of wins of each other.

By remaining idle for the bulk of this week, the IceHogs floated into first place in the division and now sport a .671 points percentage (21-9-2-3). Rockford has been in the mix for the top spot for much of the season along with the Milwaukee Admirals.

Behind the Hogs are two hot clubs that have surged up the standings. Charlotte has won ten of its last twelve and vaulted into third place. Grand Rapids, who just recently had a 15-game winning streak snapped, are close behind Rockford in second.

The Griffins, who started that epic streak with a 3-2 win over Rockford back on Nov. 18, will play the IceHogs five times before the season ends. It would also be hard to count out the Checkers or Admirals.

Even Lake Erie, who sits fifth in the division as of this week, would make the postseason as things currently stand. Rockford will have to continue to win if a division banner is in the cards.

The offense has come from a lot of places so far, but two veteran skaters on AHL contracts have helped lead the way even as the roster took on different looks.

Jake Dowell, who is currently serving as captain, is having himself a career-type season. He’s leading all current IceHogs in scoring with 23 points (7 G, 16 A). Dowell, in just under half the season, has matched his career-high numbers from 2009-10 (also with Rockford). With a skater rating of plus-21, Dowell is a huge part of the IceHogs success.

Also pitching in is Pierre-Cedric Labrie, who has ten goals and five helpers so far. With several forwards in an out of the lineup, Labrie has been a steadying presence, especially on the power play.

Also with ten goals on the season for the IceHogs in goals is second-year forward Ryan Hartman. Hartman, who also has nine helpers, was recently selected to the Western Conference All-Star team. He currently has a plus-six skater rating.

Hartman has played well, though he has been a frequent visitor to the penalty box. His 24 major penalties lead the AHL.

Two players who could also help boost Rockford’s fortunes from here on out are last year’s leading goal scorers, Garret Ross and Mark McNeill. The latter was out for a month with an injury and the former just started the season slowly.

Ross, who had 43 points a year ago, had just two through the first two months of this season. He picked up the pace with a nine-point December (4 G, 5 A) and could really help offset the loss of Jeremy Morin, who was recently traded.

McNeill has spent a lot more time at center this season. After leading the Hogs with 23 goals in 2014-15, McNeill has five lamp-lighters and seven assists to date. He has played in just 22 games; a healthy McNeill could see more action out on the wing and see those numbers improve.

Another x-factor could be Ryan Haggerty, who has missed a big chunk of the season to a knee injury. After missing nearly two months of action, the second-year pro returned to the lineup Dec. 18 and has put a laser of a wrist shot on display. In eight games back, he has three goals and an assist. He could be a player to watch in the second half of the season.

The player obtained for Morin last week, Richard Panik, was thought to be bound for Chicago following the deal. However, visa issues have prevented this. Panik is not listed on either the Hawks or Hogs rosters right now. However, his stat line is listed on the IceHogs team stats page. Hopefully, Panik will have a home soon. I’d be fine with his being in Rockford as his offense (25 points for the Toronto Marlies) would be a welcome addition.

The back end did not look real good in the opening games of 2015-16. Rockford currently sits fourth in the Western Conference in fewest goals allowed (91), so they’ve done the tighten up since surrendering 21 goals in their first four contests.

In 31 games since that dubious start, Rockford has given up three goals or fewer 27 times. They’ve benefited from another outstanding goalie tandem for sure (more in a moment). While this blue line group is not as strong or as deep as last year, they’ve done a pretty solid job at times.

One player to keep an eye on is Ville Pokka, who is sporting similar midseason numbers of his rookie year. Through 34 games, Pokka has five goals, seventeen helpers and is a plus-seven.

He had a similar stat line through the first 34 games last year (6 G, 17 A, +9). However, he faded in the latter stages of the season, especially after partner T.J. Brennan was traded. Pokka’s second half was not as impressive; two goals, five assists to go with a minus-nine rating. Finishing the season strong is the obvious goal for the 21-year-old defenseman.

Pokka does provide most of Rockford’s offensive punch from the blue line. With Erik Gustafsson (3 G, 8 A) now in Chicago, Pokka’s five goals is more than the combined goal output of the remaining defensemen. Cameron Schilling, Nolan Valleau, Dennis Robertson and Kyle Cumiskey (still out for another month or so with a lower body injury) each have one goal this season.

Kirill Gotovets, on an AHL deal with Rockford, has played ahead of Robertson most nights. Viktor Svedberg, after a stint in Chicago this fall, has come down and played solid defense.

Dillon Fournier has been stuck in Indianapolis since the opening weeks of the season and has been injured while with the Fuel. Sam Jardine, who skipped his senior season at Ohio State to sign an AHL contract with Rockford, hasn’t had the start to his pro career he likely impagined. He has a goal and two helpers with the Fuel in 26 games, having failed to win a spot on the Hogs roster.

Michael Leighton is also representing the IceHogs at the AHL All-Star Classic. He has been the primary reason that a team with a plus-ten goal differential can be in the spot Rockford currently holds.

It would be hard to imaging the IceHogs faring as well with him not in net on a nightly basis. However, backup Mark Visentin has also played very well for Rockford. Having signed an AHL deal with the IceHogs, Visentin has posted a 2.35 goals against average and a .914 save percentage in 11 games.

His 4-5-2-0 record doesn’t indicate his high level of play. Following a shaky debut, a 7-0 loss to Texas in October, Visentin has provided consistent quality behind Leighton.

Three unanswered goals on Rockford’s part claimed two points in the Hogs only action this week.

The Hogs fell behind early on a power play goal by Jordan Schroeder in the fifth minute. Rockford responded near the midway point when P.C. Labrie got a stick on a shot by Ryan Hartman to convert on a man advantage and tie the score.

Rockford took the lead 2:30 into the middle frame. Jake Dowell got to a puck behind the net and centered to Ryan Haggerty in front of the net. Haggerty knocked the offering past the clutches of Wild goalie Leland Irving and into the land of awesome to put the IceHogs ahead 2-1. Late in the period, Rockford extended the lead on a redirect of a Ville Pokka shot from the point by Chris DeSousa.

Michael Leighton was in total control of this game, denying the Wild 33 times on 34 shots. He was the game’s first star. Pokka was afforded second star honors.

Rockford returns to Northern Illinois to begin an eight-game home stand. The Wolves come to the BMO on Tuesday night. It will then be a California weekend with games against San Jose and Stockton Friday and Saturday.

Follow me @JonFromi on twitter for news, thoughts and game updates throughout the rest of the season.