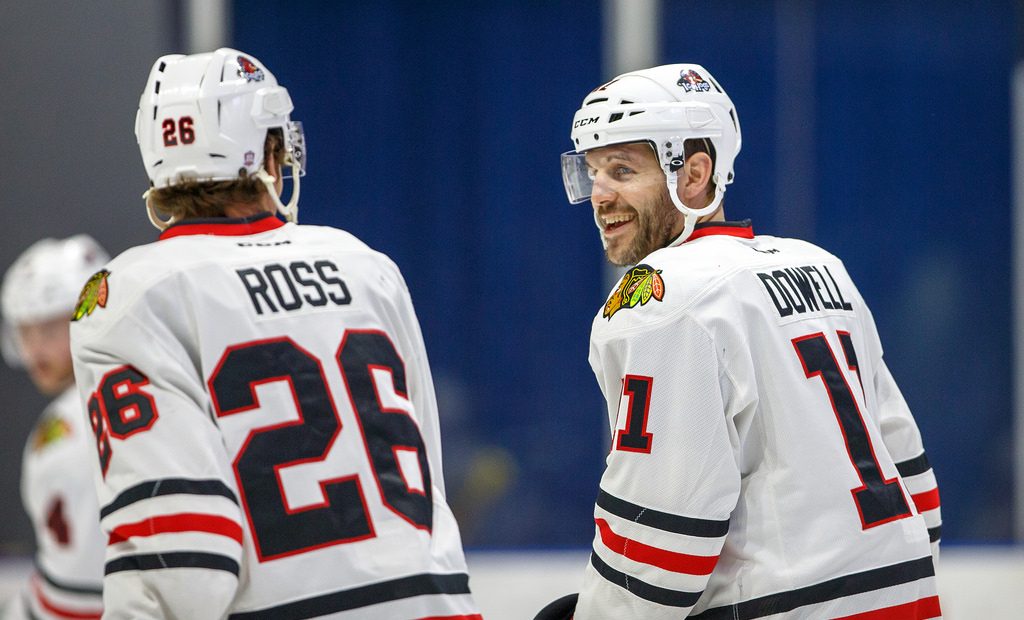 On June 14, Mac Carruth got what I believe to be a well-deserved extension from Chicago. Last summer, Carruth signed an AHL deal with Rockford when the Hawks passed on extending his entry contract. Carruth made the most of a chance created by Corey Crawford’s concussion and wrested the starters job from veteran Drew MacIntyre (headed to play in Germany this fall).

Carruth’s emergence as an option for the IceHogs crease, coupled with Chicago’s signing of Lars Johanssen earlier this spring pretty much made Leighton’s departure a foregone conclusion. The Blackhawks weren’t going to give Carruth a contract to go back to Indy.

Looking at things from Leighton’s perspective, he’s an aging NHL journeyman who would like to squeeze out one last chance at steady NHL backup work and the paycheck to go with it.

If the numbers are accurate, Leighton took a big pay cut to remain in the organization this past season. From his standpoint, he’s probably going to want more financially than the Hawks are willing to offer.

Chicago obviously made the decision that they could do without the security blanket Leighton provided. There is no guarantee as to the ceiling of Carruth or Johanssen, but the organization seems comfortable letting things play out with a younger tandem in Rockford.

Along with Dowell, Rockford has signed three other players to AHL contracts. Defenseman Jonathan Carlsson, who came aboard mid-season in 2015-16, is back on an AHL deal.

Two new faces will be on AHL contracts looking to stick with the IceHogs come fall. Forward Evan Mosey, who hails from Downers Grove, was signed back in May. The 27-year-old forward spent last season playing in England.

Monday is the deadline to tender RFAs and free agency starts this weekend. I imagine there will be plenty of activity to follow. Here are some thoughts on some of the other faces from last season’s IceHogs roster. Who stays…and who goes?

Kyle Cumiskey-Injuries washed out 2015-16 for Cumiskey, who would have been an asset for Rockford had he played on a regular basis. The Hawks are likely going to let Cumiskey walk, assuming his knee allows this.

Jay Harrison-Never skated for the Hogs after coming to the organization in February. I’m guessing he never will.

Mike Liambas-If Rockford elects to hand AHL paper to the rugged forward, it wouldn’t shock me. Another two-way NHL contract would leave me scratching my head.

Brandon Mashinter-This hurts to say as I would love to see Mashinter playing in Rockford, where he is able to have a significant impact. However, that isn’t the case in the NHL based on what we saw last season. Unless the Hawks are really hard up to bring in cheap contracts to fill out a roster, Mashinter moves on. (UPDATE-The Hawks re-upped with Mashinter on June 30 for one season.)

Matt Fraser-A former 30-goal scorer in the AHL, Fraser was not that offensive force this season. I suspect he moves on.

Ryan Haggerty-As I have mentioned previously, Haggerty really didn’t have regular spot in the lineup. I’m not privy to his work ethic other than what I see in the games. Something prevented him from getting ice time.

With a lot of prospects possibly filling spots on Chicago’s roster, Haggerty may be deserving of another season with Rockford.

Mark McNeill-I can’t imagine that the organization is going to just let a guy who has shown growth in Rockford just up and leave, though his name was thrown out as a possible trade option last week.

Now that a choice has to be made, will he be tendered an offer? (As of Monday afternoon, that answer was yes.) Seems like he’s deserving of at least one extended chance with the Blackhawks. He certainly fits the bill if Chicago is forced to fill the bottom six with inexpensive options.

Dennis Rasmussen-I’d think that this is a no-brainer if Stan Bowman has to implement the low-cost option to fill out the lineup. Guess what? He did; Rasmussen re-upped and probably spends all of next season in Chicago.

Garret Ross-There’s talent there. Is it NHL talent? Maybe somewhere. Ross, however, had a middling campaign in regards to scoring. He doesn’t play defense or kill penalties. I don’t think he’ll be tendered an offer.

Daniel Ciampini-Was used mostly in Indy last season, where he was an effective scorer. Would be an AHL signee in a similar capacity if he returns.

Kirill Gotovets-A lot of new defensive talent is coming into town this fall. Gotovets would still be an attractive option for a bottom pairing. He has improved steadily. Maybe he earns a two-way NHL deal this summer.

Sam Jardine-Left Ohio State early and signed an AHL with Rockford to take his shot at impressing the Blackhawks. Wound up in the ECHL for the bulk of the season. Not sure what kind of impression that left.

Pierre-Cedric Labrie-This is perhaps the player Rockford fans will be tracking with the most interest in the coming weeks. In two seasons with the IceHogs, Labrie is firmly established as a fan favorite. He was the focus of a lot of advertising by the AHL club and he scored 20 goals to boot.

Labrie was only on an AHL contract last season. I was actually surprised that he settled for such a deal to stay in Rockford last season. From a business standpoint, it is probably in Labrie’s best interest to parlay his 2015-16 effort into a two-way deal somewhere.

Dowell was re-signed by the IceHogs fairly quickly in the offseason. I would assume the reason Labrie hasn’t followed suit is that he’s looking for that NHL contract. This doesn’t rule out a return to Rockford; I predicted last year that he would’t be back for a second season with the Hogs. Having just turned 30, though, Labrie is probably weighing his options.

Nick Mattson-Worked his way into the defensive mix as the season wore on. Might be worth another AHL contract to see if he can stick in the lineup among a lot of new faces.

Mark Visentin-Poor guy has had two surgeries on his right ankle in the past two seasons. The writing is clearly on the wall following Hildebrand’s signing; the former Coyotes first-rounder will have to continue his pro journey somewhere else.

Dane Walters-Has been a solid bottom-six defender the past two seasons. Wouldn’t be surprised to see him back but there certainly are lots of options for the IceHogs to find this kind of role player.

I’ll check in a few weeks from now to discuss how everything shakes out over free agency. For updates on movement in Rockford, follow me on twitter @JonFromi.