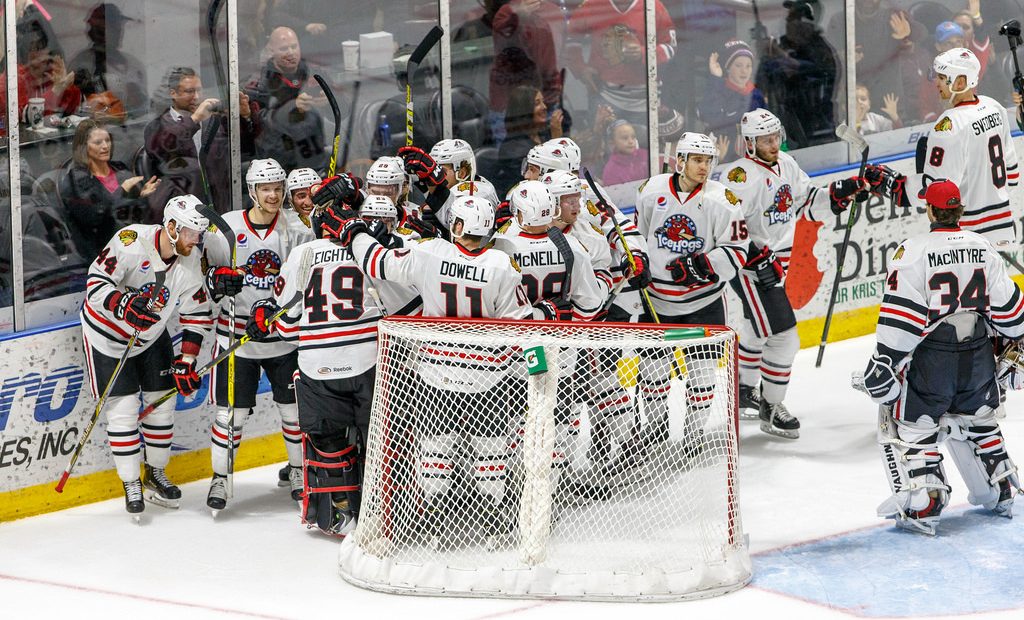 The Rockford IceHogs gained a measure of swagger back over the weekend, turning the tables on the Lake Erie Monsters. Last weekend, the Hogs were on the losing end of back to back games at Lake Erie. Saturday and Sunday, it was Rockford’s turn to sweep.

Despite being out shot 74-45 in the two contests at the BMO Harris Bank Center, the IceHogs limited their guests to a single goal. The big weekend, coupled with an overtime loss to Grand Rapids Wednesday, gave Rockford five of six points in this week’s action.

Saturday, in particular, was a big night for Michael Leighton, who had himself a record-breaking evening. Good thing I was wearing my brand-spanking-new Leighton sweater.

Leighton blanked the Monsters for his 46th career shutout in the AHL, besting the previous mark set by Johnny Bower that stood for nearly 60 years. Oh, yeah; Rockford won the game 5-0.

That performance was hard to top, but newly acquired veteran Drew MacIntyre gave it his best shot. Drawing the assignment between the pipes Sunday afternoon, MacIntyre denied 38 of 39 Lake Erie shots to propel the IceHogs to a 2-1 victory in his first action with Rockford.

For the time being, Rockford has an excellent tandem. Leighton shouldn’t have to play every night the way he was used through the bulk of this season. It also gives Ted Dent a reasonable playoff option should one of the two vets get a recall to Chicago later this spring.

Leighton allowed just one goal in Wednesday’s start, making 30 saves in a 2-1 overtime loss to the Griffins. After a rocky month of February, which saw Leighton give up four goals in just over 20 minutes of action against the Monsters February 26, the IceHogs are again looking strong in net.

Kyle Baun signed a two-year extension with the Blackhawks last week. The forward must have been pretty stoked because he went out and scored his first pro goal Sunday afternoon when his shot attempt slid under the pads of Lake Erie goalie Anton Forsberg.

That tally gives Baun four points (1 G, 3 A) in 24 games in his first season in Rockford. He hasn’t been overly impressive. Both those extension seasons are one-way, though at 625 K his salary can be buried in Rockford if need be.

To be fair, Baun missed the bulk of the season with a laceration on his arm. The organization thinks enough of him to bring the 23-year-old back. It would be great to see him finish the spring healthy and effective.

A 23-year-old who hasn’t received an extension is Ryan Haggerty, who has also missed substantial time this season. Unlike Baun, he’s had a hard time winning ice time since his return.

Haggerty has seven goals and three helpers in 28 games with Rockford. Since Baun returned February 6, Haggerty has been scratched four times and frequently drawn fourth-line assignments when he has played.

If the jury is out on Haggerty’s potential, it might be hard for him to win over management with the opportunities he’s currently receiving.

You know who else is a 23-year-old RFA-to-be? Garret Ross, who has seen his numbers drop after a 43-point season a year ago. With Ryan Hartman and Vinnie Hinostroza drawing in on the top lines, Ross may be coming to a crossroads in his career with the organization.

At his current scoring rate (7 G, 13 A) through 54 games, Ross will be hard-pressed to even match his rookie totals of 15 goals and 19 helpers. He’ll be a player Chicago has to make a decision about come summertime.

This week’s recaps will be brief due to some work commitments; no lines or special teams. Sorry; check out @JonFromi on twitter for the lines for Wednesday and Saturday’s games.

The Hogs led heading into the third but a Tyler Bertuzzi goal tied the game in the third period and a Mark Zengerle 4-on-3 tally got the best of Rockford in Gus Macker Time.

The IceHogs goal came at 15:44 of the first period when Bryan Bickell was the fortunate recipient of a feed from Mark McNeill. Bickell flung the puck in from the slot for his 12th goal of the season.

Rockford had six power play chances to press its advantage but could create much offense all night. Jonathan Carlsson was whistled for high sticking with 1:12 remaining in regulation. Zengerle beat Leighton to complete an odd-man rush 39 seconds into the extra session.

Four second period goals was the tonic for what had been a three-game losing streak. Michael Leighton provided the backstop for the Hogs, stopping every one of the 35 shots fired at him. On Scott Darling Bobblehead Night, no less.

Bryan Bickell finished a strong passing sequence that started with Vinnie Hinostroza getting the puck to Mark McNeill. McNeill delivered to Bickell, who delivered to the back of the net 1:22 into the second.

Pierre-Cedric Labrie cleaned up a rebound of Jake Dowell’s shot attempt on Brad Thiessen to make it 2-0 at the 6:49 mark. McNeill got a goal of his own when Ville Pokka set him up at the left post on a power play 12:06 into the period.

The sellout crowd at the BMO had barely enough time to settle into their seats when Tanner Kero followed up on a Matt Fraser shot that clanged off the post. Kero got goal number 17 on the season and gave Rockford a 3-0 lead.

Late in the third period, Labrie treated the BMO throng to free custard with his second of the night, a transition slap shot that caught the top shelf. Leighton, Bickell and McNeill were the game’s three stars.

Also of note was Kyle Cumiskey returning to the lineup for just his sixth game this season. Cumiskey missed the first ten games with a knee injury and had last played for the Hogs on November 18.

Another sellout audience watched Drew MacIntyre make his on-ice debut for Rockford since being obtained at the trade deadline. MacIntyre made 38 saves to lead the Hogs to a sweep of Lake Erie for the weekend.

Kyle Baun got his first goal of the campaign thanks in part to a splendid pass by Ville Pokka that situated the rookie at the doorstep of the Monsters net. Baun’s offering snuck under the pads of Anton Forsberg with 1:30 left in the opening frame.

Pokka had another hell of a helper in him; the defenseman set up Mark McNeill at the right post with an open net at which to shoot. McNeill did not miss, slamming home his 17th goal of the season for a 2-0 Rockford lead 8:46 into the second period.

MacIntyre lost his shutout bid with 4:28 remaining in the game. Late in a Monsters power play, Oliver Bjorkstrand one-timed a bullet into the top corner of the cage. Lake Erie laid seige to the IceHogs goalie with 14 third-period shots. MacIntyre held on for the victory despite the Monsters going with six attackers for the last minute.

It was again an all-Hogs affair when the three stars were announced. MacIntryre, Pokka and Baun received the honors.

Rockford’s mini-home stand concludes Tuesday when the Hogs host Milwaukee, still right behind Rockford for the Central Division lead. The IceHogs will spend the weekend in Charlotte with games on Saturday and Sunday.