High On The Hog: Iowa Giveaways 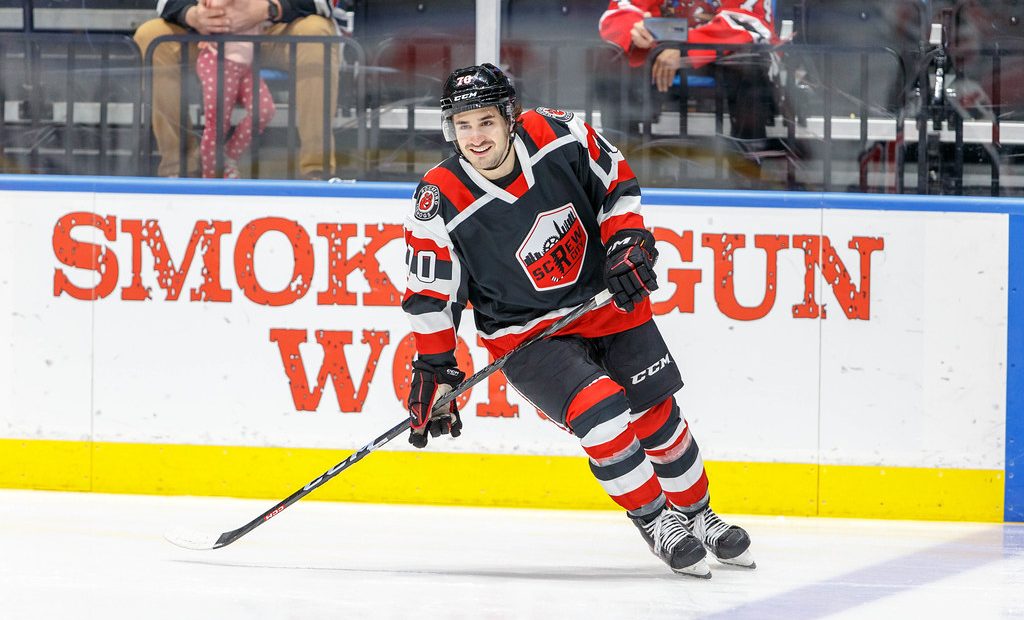 The Rockford IceHogs have played host to Iowa three times this season. They have led Iowa late in both games. They have allowed the Wild to tie each game in regulation and steal standings points from them.

Rockford was 1-1-1 this week, picking up some ground in the Central Division standings. Each game needed extra skating to decide the piglet’s fate. After prevailing 2-1 in a shootout Wednesday against Milwaukee, the IceHogs dropped a 3-2 shootout to the Wild Friday before losing 3-2 in overtime to Iowa Saturday night.

The two weekend games were near carbon copies. Rockford outshot the Wild, squandered lots of chances both at even strength and on the power play, and let Iowa hang around until they could finally figure out Mitchell Weeks on Friday and Dylan Wells on Saturday.

Both Rockford goalies played very well, particularly Weeks. The rookie stopped 32 shots and a pair of shootout attempts as his AHL record fell to 3-1-2. Weeks has a 2.75 GAA and a .915 save percentage in six appearances with the IceHogs. He’s also gone 8-2-1 for the Indy Fuel (3.00 GAA, .901 save percentage).

Back on November 6, Rockford led the Wild 4-2 with less than two minutes to play, only to let Iowa off the mat and win 5-4 in a shootout (Weeks was also in net for that loss). In all, the Hogs have given away three standings points in the three losses to the Wild, while handing Iowa six points.

Rockford (12-7-1-2) is in third place in the Central Division, with 27 points. Milwaukee leads the Central with 31 points. Texas is second, with…wait for it…30 points.

Who is right behind the Hogs with 26 points? Iowa, who would be near the conference basement if not for the charitable piglets.

Rockford is back in action against…guess who? It sure would be great if the Hogs could get to DesMoines, convert on opportunities, and pick up a regulation win.

Games Aren’t All The Hogs Gave Away This Weekend

Saturday featured a hat giveaway as well as being the team’s annual Teddy Bear Toss. The hat was designed by Hogs forward Josiah Slavin, who picked up his first goal of the season on Friday. Fittingly, it came shorthanded, with Slavin pouncing on a rebound of Cole Guttman’s breakaway attempt.

Lukas Reichel made a quick jump to Chicago Tuesday, playing for a short-handed Blackhawks club in New Jersey. The following day, Reichel returned to Rockford.

Reichel had a six-game point streak snapped this weekend, as he went scoreless in both games (though he did convert a shootout attempt Friday). In that six-game stretch, Reichel had five goals and five helpers. The Hawks prospect is now second on the team in scoring with 11 goals and 13 assists.

Sunday, Rockford recalled defenseman Cooper Zech from the ECHL’s Indy Fuel. Zech, who was little used by the Hogs after being swapped for Evan Barratt earlier this season, has played well for the Fuel. In eight games, Zech had five goals and five assists in Indy.

After the aforementioned trip to Iowa Tuesday night, the IceHogs play host to a couple of Eastern Conference teams. The Toronto Marlies, who currently sit atop the Northern Division, come to the BMO Center Friday night. Hartford, who Rockford defeated back on December 3, is the opponent Saturday night.