High On The Hog: How Many Goals Will Be Enough? 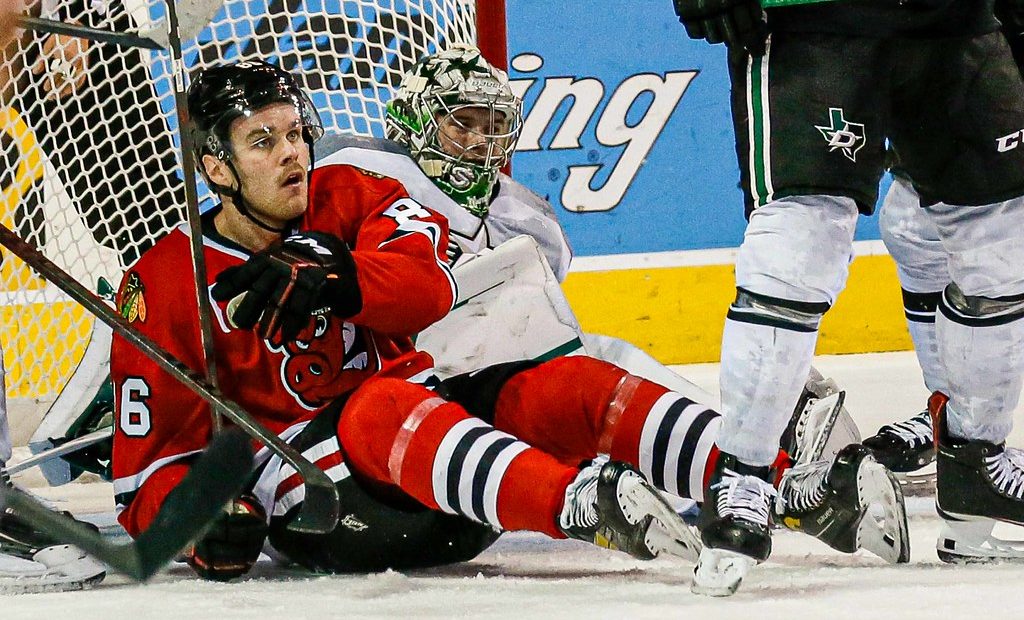 How many goals do the Rockford IceHogs have to score to get a win these days?

A lot. At least for a while.

The piglets are dropping an average of 3.73 goals per game on opponents in eleven games this season. Unfortunately, Rockford is giving up 3.82 goals to those opponents.

The Hogs dropped a 3-2 decision to Texas on Saturday night. A sluggish middle frame doomed Rockford as Texas scored three times to take control of the contest. On Sunday, Rockford prevailed in a see-saw affair by a score of 5-4, garnering a split of the weekend road trip.

As was the case last season, the IceHogs are surrendering a lot of shots-32.9 a game this season, the third-highest in the AHL. Last year, the play in net negated that stat to a certain extent. With a current lack of AHL experience in goal, it’s a different story.

Jaxson Stauber and Dylan Wells have a total of 30 AHL games between them. At the moment, Rockford lacks a goalie that can carry the main workload and hold opponents under three goals. In the Hogs first eleven games, they have held an opponent to under four goals just four times. Rockford is 3-1 in those games.

In the other seven games, the IceHogs are 2-4-0-1, despite averaging over three goals a game.

Rockford’s current goalie tandem is likely to continue to struggle to hold down the score. Until a goalie comes down from Chicago (Arvid Soderblom, perhaps?), the piglets will have to rely on their quick-strike offense in order to stay competitive in the Central Division.

Ian Mitchell, who had been recovering from a right wrist injury since training camp, was assigned to Rockford on Friday by the Chicago Blackhawks. Mitchell was on the ice for both games this weekend, picking up an assist in Sunday’s victory.

Cole Guttman had been on concussion protocol since hitting his head on the ice in Manitoba on October 15. He scored his first professional goal in his return to action on Saturday and was quite active on Sunday as well.

Stauber, who had been out since taking a puck to his mask on October 29, got the start on Sunday, stopping 42 of 46 shots to pick up his second win of the season. Also returning in net for Rockford was Wells, who had been with the Blackhawks the previous week. Wells made 33 saves in the IceHogs loss on Saturday night.

A solid start went for naught, as a sloppy second period spelled defeat for Rockford at the H.E.B. Center.

Cole Guttman made his return to the lineup count with his first professional goal. It came at 9:14 of the first period, when Guttman cleaned up a rebound of a Bobby Lynch shot. Garrett Mitchell got the play started, skating into the offensive zone and sending a pass off the halfboards to Lynch for the secondary assist.

The Hogs lead disappeared in the middle frame, as the Stars got a put-back by Fredrik Karlstrom at 10:44 of the second. Rockford was awarded a power play shortly after, but the puck suddenly became slippery. Brett Seney lost possession in the d-zone, leading to a Thomas Harley goal at the 12:14 mark.

Texas out shot the Hogs 18-4 in what may have been the worst span of play of the season for Rockford. The Stars capped the humiliation with Marian Studenic’s snipe from the top of the left circle, which got by Hogs goalie Dylan Wells at 17:36 of the second for a 3-1 Texas advantage at the second intermission.

The bulk of the third period saw the Stars prevent Rockford from rallying. Hogs starting goalie Dylan Wells was brought to the bench, leading to Seney tipping in a shot by Lukas Reichel with 2:31 remaining. Despite bringing Wells, who made 33 saves on the night, back to the bench, Rockford could not get the equalizer.

The Stars sent 46 shots toward Jaxson Stauber on Sunday. The rookie goalie denied 42 shots, which was enough for the Hogs to prevail in the closing minutes.

The IceHogs got on the board early in the game when Issak Phillips gained possession in the neutral zone. He connected with Luke Philp, who hit David Gust entering the Texas zone. The shot from the right dot beat Stars goalie Matthew Murray 1:19 into the game for a 1-0 Hogs lead.

Texas evened the score behind a drive by former Hogs forward Tanner Kero. Kero was well-defended by Jakub Galvas, preventing Kero from getting off a serious shot. The puck, however, slid under the pads of Rockford goalie Jaxson Stauber at the 4:49 mark.

Gust restored the IceHogs lead 8:37 into the first. Cleaning up Philp’s wrister from the left circle, Gust converted on the rebound left by Murray for a 2-1 Rockford advantage. The Stars had two power-play chances turned away by Rockford, who held that 2-1 lead into the first intermission.

The middle frame was a see-saw affair. Texas quickly went out to a 3-2 lead on Kero’s second tally of the night and a deflection by Riley Tufte. Both goals came in the first two minutes of play.

The IceHogs took a while to respond, but got the game knotted at three in the fourteenth minute. This time, Gust played the part of facilitator, flipping a puck out of the defensive zone and to a streaking Bobby Lynch. The shot beat Murray to the high glove side at 13:30 of the second.

Issak Phillips gave Rockford a 4-3 lead late in the second with a one-timer set up by a offensive draw victory by Brett Seney. Ian Mitchell received the puck and slid it to Phillips for the long-distance strike with 44 seconds left in the period.

The Stars knotted the game at four goals on the power play three minutes into the third period. Riley Damiani got a shot over the glove of Stauber just as the man advantage was expiring.

Damiani was called for a high-stick 15:55 into the third to set up the eventual game-winner. As the IceHogs skated the puck across the Texas blueline, Mike Hardman threaded a pass to a streaking Luke Philp in the slot. Philp nabbed the feed behind the Stars defense and sent a backhand past the prone Murray at the 16:18 mark.

Murray was pulled for the extra attacker for most of the last two minutes, but Rockford held on to earn the weekend split.

Rockford is back on the road Wednesday, when they play an 11:00 a.m. EDT tilt with Grand Rapids. This coming weekend, the Hogs have a home-and-home with the Chicago Wolves. Friday’s 7:00 p.m. CDT puck drop takes place at the BMO Center before the teams move to Rosemont for a 7:00 p.m. CDT start on Saturday at the Allstate Arena.