High On The Hog: Getting Wild In Iowa 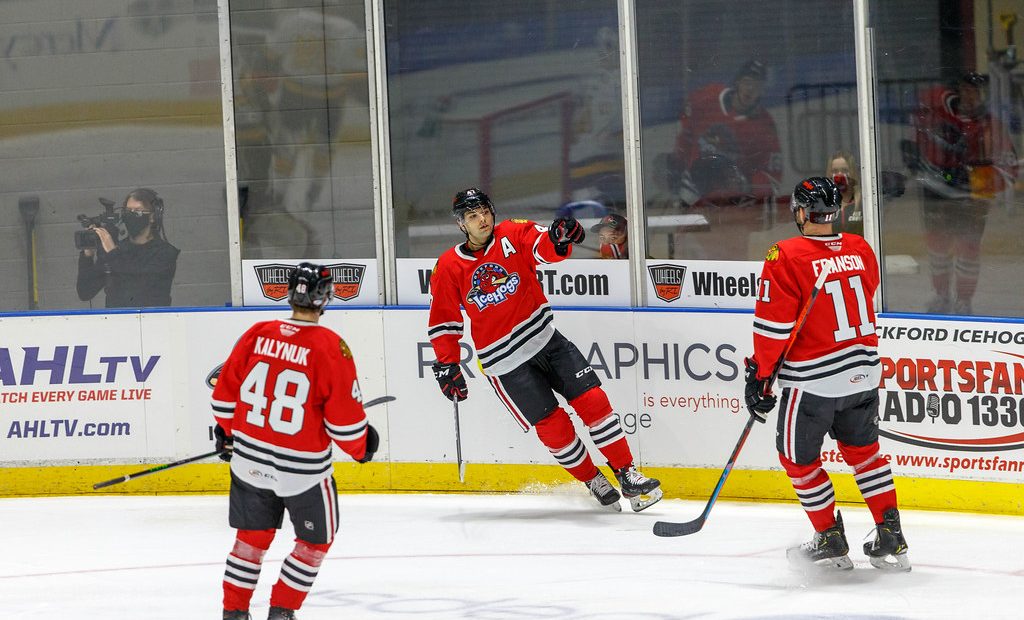 The Rockford IceHogs are still looking for their first win of the recently-started 2020-21 season. Rockford resumes the quest for victory Saturday night when the piglets travel to DesMoines. The first of ten meetings with the Iowa Wild is set to start at 6:00 p.m. at Wells Fargo Arena.

Here is how the week went for the IceHogs, along with a look at their Saturday foe.

On Thursday, the Blackhawks recalled defenseman Wyatt Kalynuk to the taxi squad. Kalynuk had played in both of Rockford’s first two games, posting a goal and an apple in the season opener.

In a reciprocal move, Chicago assigned defenseman Anton Lindholm to the IceHogs. Lindholm had been on the taxi squad and had not appeared in a contest with the Hawks so far this season. The 26-year-old Lindholm had 164 games of AHL experience under his belt with the San Antonio Rampage and the Colorado Eagles.

A Look At The Iowa Wild

Minnesota’s AHL affiliate is 1-1-1 on the season. All three games were at home with Texas. The Wild is coached by Tim Army, who is starting his third season as the head man in Iowa.

AHL veteran Gabriel Dumont is pacing Iowa with four points (3 G, 1 A) on the season. Second-year center Connor Dewar also has four points (2 G, 2 A). Forward Dimitry Sokolov (2 G, 1 A) is entering his third full season, with 15 and 16 goals the past two years.

Former IceHogs forward Joseph Cramarossa signed a one-year contract with Minnesota this past summer. Moxie Joe has a goal this season to go with a fighting major so far for the Wild. He’s another experienced skater that should agitate the piglets.

Cody McLeod has a dozen NHL seasons under his belt. The 36-year-old forward spent last season with the Wild and returns as an alternate captain. Center Jarrett Burton is another veteran who has time with Wilkes-Barre/Scranton and Rochester over the last five seasons.

Skokie native Louie Belpedio is back for a third season on Iowa’s blueline. Also on defense for the Wild is Ian McCoshen, who spent most of last season with Rockford. Keaton Thompson is entering his fifth year in the AHL and second for Iowa. Hunter Warner is another Wild defenseman that has several seasons with the team.

In goal, the Hogs will likely be facing Dereck Baribeau, who has played well in his two starts this season. He’s sporting a 1.92 GAA and a .923 save percentage. The 6’6″ Baribeau saw limited action with Iowa last season, playing 15 games with Allen in the ECHL.

Hunter Jones gave up seven goals to the Stars in his AHL debut on February 5. Jones is a second-round pick of the Wild in the 2019 NHL Draft.

The piglets traveled to Hoffman Estates, losing to the Wolves for the second-straight game. Philip Tomasino and Rem Pitlick each had a pair of goals to send Rockford home 0-2 on the season.

The Wolves got the scoring started late in the opening period. Seth Jarvis took in a pass from teammate Joey Keane at the top of the right circle on a Wolves power play, set up by an Evan Barratt slashing infraction. Keane maneuvered around Michael Krutil and fired a shot that glanced off of Hogs goalie Scott Darling. The puck entered the Hogs net at 15:59 for a 1-0 Chicago lead.

Midway through the contest, Barratt had just completed a pass when he took a hit from Wolves defenseman Max Lajoie. Barratt left the game with the aid of the training staff; he was not putting weight on his right knee. Lajoie had to tangle with Andrei Altybarmakyan, who jumped in and dropped the gloves in a brief scrap.

Lajoie was given a major penalty and game misconduct for kneeing. Barratt would return to action later in the period. Altybarmakyan was handed a two-minute instigating minor and a ten-minute misconduct. After some four-on-four action, the Hogs got some power play time and were able to tie the contest.

D.J. Busdeker pounced on the rebound of a Chad Krys one-timer and sent the puck through the wickets of Chicago goalie Jeremy Helvig. Alec Regula was credited with the secondary assist for the goal, which came 13:55 into the second stanza.

The game didn’t remain tied for long. Chicago’s Philip Tomasino drove to the net and snapped a shot that got over Darling’s glove at 16:10 of the second. Two minutes later, with Rockford again on the man advantage, Krys whiffed on a one-time attempt and fell to the ice. Rem Pitlick was off to the races, easily beating Darling on the breakaway strike for a 3-1 Wolves lead.

Tomasino got a stick on a Jeremy Davies shot, changing the direction enough to get it into the Hogs net to make it 4-1 Chicago in the ninth minute of the third period. The IceHogs picked up a shorthanded goal of their own at the 10:44 mark. Chris Wilkie sent a wrist shot from the goal line near the right half boards. The puck glanced off of the leg of Helvig and into the net to cut the Wolves lead to 4-2.

Pitlick closed out the scoring in the final minutes, taking a pass from Stelio Mattheos and beating Darling to complete the odd-man rush with 1:32 remaining in the game.

Follow me @JonFromi on twitter for thoughts and game updates as the Hogs tangle with Iowa Saturday night.