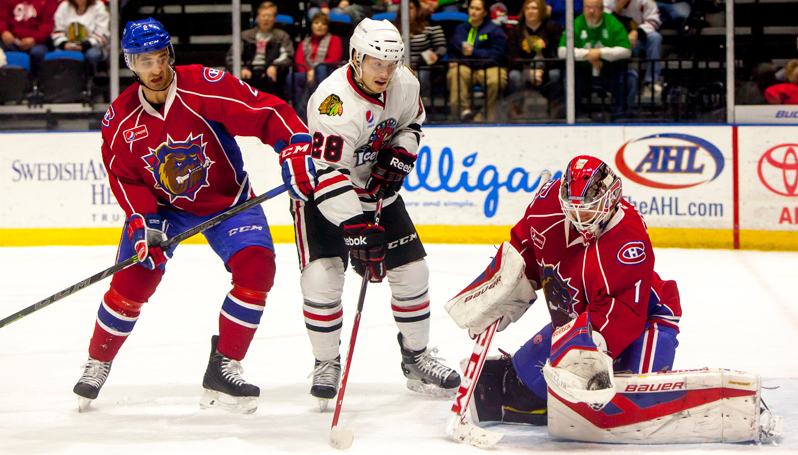 Explaining the Rockford IceHogs current funk is pretty simple. The kids just aren’t getting the puck in opposing nets. The IceHogs still maintain the top spot in the AHL’s Midwest Division with 42 points in 34 games. The holidays have not been kind to the young Blackhawks prospects, though.

Rockford has dropped five of its last six games over the last two weeks. In four of those losses, the Hogs have been held to one goal. Coach Ted Dent has scrambled some of his forward lines as well as his defensive pairings to little avail.

Let me offer some opinion at this point.

Adam Clendening and Kyle Cumiskey seems a bit odd as a defensive combo. Klas Dahlbeck, who would usually be beside Clendening, has been relegated to skating with whatever sixth d-man happens to be in the lineup.

Drew LeBlanc and Matt Carey have both been used to fill in gaps in the lineup. LeBlanc has also seen a lot of power play time for a guy who doesn’t really score much. Phillip Danault has been skating on the wing with some regularity in recent weeks.

Of course, it would be hard to pick at Dent’s lineup shake-ups if they were producing goals. They aren’t, though. There was a four-goal explosion in Rockford’s lone victory in the last fortnight against Chicago Sunday afternoon. Three of those four goals came in a three-minute pocket of the second period, however.

Assistant coach Mark Osiecki is currently off coaching the USA at the World Junior Championships. His replacement on the Rockford bench is Barry Smith. Could this be a reason for some different looks in the lineup? I guess this depends on how much control in this area that Dent is allowed by the organization.

The Independent Republic Of Teuvo

Teuvo Teravainen has been finding team mates with his passes and has managed to pick up his goal output as well. Teravainen has dented the net three times in his last five contests.

December has easily been the young Finn’s most productive month in his rookie campaign. In 12 games this month, Teravainen has three goals and seven helpers. With 23 points (6G, 17A) this season, Teravainen is fourth among AHL rookies in scoring. In the past few games, Dent has used him to kill penalties as the Hogs prepare to return to even strength.

It is also worth pointing out that in several key offensive draws late in games, Dent has elected to have another player (on Tuesday it was Mark McNeill) replace Teravainen at the dot.

Stephen Johns has still not returned following a big hit in the back he suffered back on November 26. Johns has been out for 14 games with what is likely a concussion. I have said this before, but it bears repeating; Johns was taken to the locker room following the hit, returned minutes later to finish the second period and has not played since. Just sayin’…maybe they shouldn’t have let Johns come back out.

Garret Ross has now been out five games since being injured in Iowa December 16. Ross is still Rockford’s leading goal scorer with 11 tallies. McNeill, who has come back strong after missing about a month of action, is second on the team with 10 goals.

While we’re on the subject of goals (or the recent lack thereof), three players, T.J. Brennan, Brandon Mashinter and Dennis Rasmussen, are tied with seven goals for the Hogs. Joakim Nordstrom has eight but I will include his totals if/when he ever comes back to his captaincy in Rockford.

The IceHogs dropped their fourth straight game and second straight against a Wild club that has been playing improved hockey as of late. Still, this one hurt because the scoring wasn’t there despite 39 shots on Iowa goalie John Curry. Rockford was forced to play a lot of dump and chase because their neutral zone passing just could not get in sync.

Iowa got on the board midway through the opening period on a power play goal by Tyler Graovac. The man advantage was created following a hooking penalty by Pierre-Cedric Labrie.

Halfway through the second, Rockford drew even while killing a Dennis Rasmussen tripping infraction. T.J. Brennan cleared the puck down the left boards into the Iowa zone. Cody Bass outhustled the Wild and found Teuvo Teravainen, who was making a rare PK appearance. The rookie center took his time and paid a visit to Cordville from the right post, making the score 1-1 at the 11:29 mark.

A crowd of over 5,000 was teased with the prospect of fisticuffs when Curt Gogol was called for a cross check on Matt Carey in the 13th minute. Brandon Mashinter sent an invite and Gogol, who has had run-ins with several Hogs in recent matchups, seemed to accept.

Both gentlemen had the gloves off and only needed to begin the dance. However, each was intercepted by an official before the proceedings could go further than some mutual chirping. Mashinter and Gogol had several words from the benches in the third period, but a battle between former Worcester Sharks team mates was not to be.

Iowa got the eventual game-winner in the 16th minute of the second when Matt Dumba sent a shot the way of Michael Leighton. The rebound was collected by Iowa’s Jordan Schroeder with Drew LeBlanc right between him and the net. Schroeder backhanded the puck between his legs and across the goal line.

Rockford outshot the Wild 14-4 in the final 20 minutes but failed to get the necessary net presence to take advantage of a couple of opportunities in the crease.

A much-needed victory was picked up in front of a full house at the BMO. Rockford used a three-goal middle stanza to take control and cruised to an Illinois Lottery Cup win over the Wolves.

(By the way, the aforementioned Illinois Lottery Cup was sitting out in the concourse by the season ticket holders entrance earlier this year with absolutely no security monitoring it. I went over to give it a tap and learned that it was made out of some sort of metal and not the plastic I believed it to be. So, now I owe my buddy a Coke.)

Dennis Rasmussen got the scoring started for the Hogs after a couple of nice moves with the puck got him through the neutral zone. Rasmussen, Brandon Mashinter and Adam Clendening all got shots to Chicago goalie Jordan Binnington and all were denied. However, Rockford kept the puck in the Wolves zone.

Mashinter sent the rebound of Clendening’s attempt up top, where Pierre-Cedric Labrie sent yet another attempt to the net. Rasmussen was in front of the cage with a redirect and was able to finish the excellent shift he started. At 13:07 of the first period, Rockford led 1-0.

The game was decided in the first three minutes of the middle stanza, where the Hogs suddenly found the offensive prowess that has eluded them in the last couple of weeks. The player having a hand in all three Rockford goals in that span was Teuvo Teravainen.

It all started on the opening shift, where the IceHogs entered the Chicago zone within a few seconds and were able to hold the puck in Wolves territory despite changing forwards. Kyle Cumiskey, Ryan Hartman and Clendening were able to hold in clearing attempts to keep the pressure on.

The payoff came 53 seconds into the period when Binnington left a rebound on Clendening’s shot come out to Teravainen at the left dot. With the back door open for business, Teravainen flipped the biscuit into the basket for a 2-0 Rockford advantage.

Teravainen had the primary assist on the next Hogs tally 54 seconds later. Line mates Mark McNeill and Peter Regin took on three Wolves behind the Chicago net on another extended tour of the offensive zone. Regin got the puck to slide to Teravainen in the left corner and the rook saucered a pass to his roomie, Ville Pokka. Dottie cued the horn from the slot to put the IceHogs up 3-0 1:47 into the second.

But wait…there’s more. Joe Sova hooked Rasmussen coming around the Chicago net at the 2:44 mark and the IceHogs went on the game’s first power play. The Wolves won the draw but Rockford quickly re-entered the zone. Teravainen’s attempt was initially stopped by Binnington but McNeill was there at the left post to follow up. McNeill’s dedication to cleaning the crease resulted in a 4-0 Rockford lead just 3:05 into the second period.

Binnington was pulled in favor of Matt Climie. The goal explosion came to a close but four was all the Hogs needed. Chicago got goals from Colin Fraser and Mathieu Brodeur in the third period but Rockford was still able to break a four-game losing skid.

Teravainen, Clendening (who broke a five-game scoreless drought with his first multi-point game of the season) and Regin were the first, second and third star, respectively.

Once again, the Hogs found themselves long on shots (41) and short on goals. Just a single puck got behind Bulldogs goalie Mike Condon.

After Pierre-Cedric Labrie and Hamilton’s Joe Finley went at it a little over two minutes into the contest, the Bulldogs opened the scoring when a Matt Carey pass in the offensive zone was out of Zach Miskovic’s reach. Charles Hudon chased down the loose puck and skated unchecked toward Scott Darling in the Rockford net. Hudon was able to come across the crease and wait Darling out, flipping the puck over the goalie’s right pad at the 2:55 mark for a 1-0 Hamilton lead.

The IceHogs tied the game in the sixth minute when Mark McNeill powered into the Hamilton zone. McNeill skated along the goal line toward the net before hitting Dennis Rasmussen at the right post for a one-timer past Condon.

The game remained knotted through the second period despite a pair of power play opportunities for each team. The eventual game-winner was scored 4:25 into the final period when Darling left a rebound off a Daniel Carr shot. Christian Thomas was in front of the net and made the easy put-back to put Hamilton on top.

Rockford had several excellent chances among the 15 shots they sent Condon’s way in the final 20 minutes. The last six minutes saw several pucks in front of the net that the Hogs couldn’t nudge into the net.

Rockford is in Grand Rapids tonight to finish the 2014 portion of its schedule. They open 2015 Saturday night in Chicago.

If you have absolutely nothing else to do New Year’s Eve (my wife is sick and my kids have video games), I am planning on doing some live tweeting while watching the Hogs take on the Griffins tonight. Follow me at @jonfromi…puck drop is at 5:00 p.m. central time.