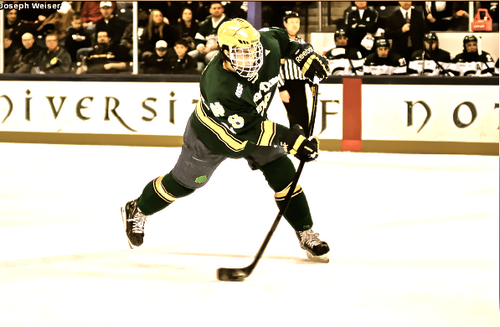 Time for our spin around the Canadian backwaters and American college towns to find out what’s up with the Hawks kids this past weekend. Are you ready to fly? Let’s go!

Let’s do the normal snake pattern from the Quebecois to the cowboys and then back down through the US. That means the QMJHL to kick it off. Phillip Danault had two assists in tw games for Victoriaville against Chicoutimi and Quebec. I think I had some Chicoutimi on my burger last week, utterly delicious. Danualt now has 33 points in 22 games, both equally divisible by 11 which is awesome. Something great about the multiples of 11. I think it’s the symmetry. His teammate Brandon Whitney continues to see pucks whiz by him a little too consistently. He gave up five goals on 19 Chimchurri shots. But he backed that up with a 31-save performance on 33 shots against Quebec. Victoriaville is 4th in their division.

In Rouyn-Noranda, Dillon Fournier was a +1 in three games over the weekend.

Hopping over to the OHL now. So put away your English-to-French dictionaries, or at least the Brain-Injury French they speak in Quebec.  Alex Broadhurst is on a bit of a hot streak with London, piling up four points in three games (1G, 3A). That leaves him with 20 points in 23 games. Garrett Ross appears to be carrying an injury, as he didn’t play this weekend.

Right, over to the WHL, so get bring your rodeo clowns. Caught some of Mark McNeill against Russia in the SuperSeries, and he was impressive. Really played to his size. Anyway, he returned to Prince Albert after that and had three assists in three games in three nights to beat the cat that ate the rate in the house that Frasier built. He sits at 27 points in 24 games.

Down where Carrie Brownstein isn’t playing with Sleater-Kinney or Wild Flag, Mac Carruth had his first slip of the season, giving up five goals to Kamloops (who just happen to have the two leading scorers in the league in JC Lipon and Colin Smith, who have combined for 99 points in 25 games. Oh, and they’re both Avs prospects).

Right, down to the college ranks. Braden Birch was on the TVs on Friday as Cornell lost to Harvard. He looks big. That’s about all I noticed. Kevin Hayes didn’t scratch in two games for BC. Stephen Johns was pretty impressive from all accounts as ND swept Michigan in Yost for the first time in years. Paul Phillips had an assist as Denver pretty much used Colorado College as a mop all weekend. Justin Holl had a very nice game on Friday against Wisconsin, though he didn’t score. Holl has been moved to forward for the Gophers, which can’t really help his pro prospects much. At least that’s where he played in both games at the weekend.

And that’s all there is to print.