Game #57 – Hawks at Canucks Preview – Seaward With The C-Words 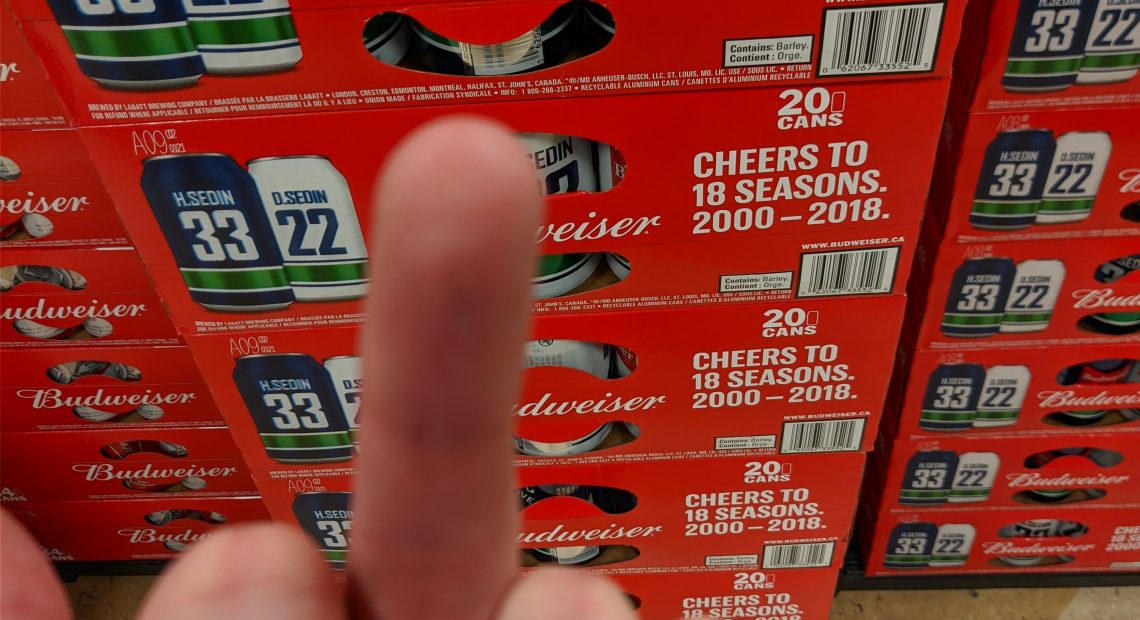 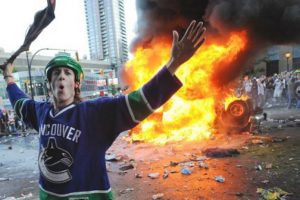 After a thoroughly embarrassing performance in Edmonton last night, the Hawks have no time to regroup as they continue their Western Canadian tour in Vancouver tonight against the Canucks, and just in time for Sedin Twin Night as 22 and 33 go into the rafters at Rogers Arena.

A note on the festivities first, as the Canucks’ braintrust clearly feels like they’re being extra super clever by slating this game against the Hawks, as if everyone can’t see exactly what it is they’re trying to accomplish. And this would be grating and annoying if it weren’t so craven, sad, and hilarious. The fact that they’re trying to knife twist over a first round series win over an 8 seed, one they nearly shat their pants completely in, and haven’t won another series since that year while the Hawks added two more banners to the rafters while the Canucks still have exactly zero. Even their expansion-mate Blues and their psychotic, toothless, racist hillrod fans finally managed to break through last year. So enjoy your night Vancouver, clearly it’s well earned and well-deserved.

Now to matters on the ice, where the Canucks most recently dong-whipped the Predators at home on Monday, chasing Ol’ Shit Hip with four goals by early in the second period. It was a dominant performance on the power play from Hughes The Elder, who likely has the inside track on the Calder Trophy at this point, and at the very least is a for-sure finalist. He’s been primarily paired at evens with Chris Tanev, who has aged well into the centerfielder role for the freelancing rookie. Even if the two of them are slightly underwater in possession, Hughes being on pace for 64 points (44 currently) from the blue line as a 20-year-old rookie hides a multitude of sins. Alex Edler and his elbows and Troy Stetcher have a similar dynamic on the second pairing with similar possession results, but neither of them are setting the world on fire from a scoring standpoint. Jordie Benn and his beard and Tyler Myers big tall dumb ass form the third pairing, and in limited time together they’ve gotten absolutely skulled, so naturally they will probably both be puck rushing dynamos (dynamii?) tonight.

Up front, while Elias Petterson remains the foundational offensive talent that this team can build upon, the real surprise to this point has been the emergence of J.T. Miller as the prohibitive Selke favorite for anyone that pays any kind of attention to what really matters for the award. Miller is only a point behind Petterson for the team lead (56 to 57), and while surely having the young Swede on his line has helped his scoring output, Miller himself is putting up some impressive underlying numbers, with nearly a 58 share in attempts, and Petterson and linemate Brock Boeser’s shares drop by nearly 14% without him. What was a salary dump for the Bolts has reaped huge rewards for Jim Benning’s top line, proof that the sun does indeed shine on a dog’s ass at least once a day. Recently however, Travis Green has shuffled things with Miller on Bo Horvat’s wing with Boeser hurt, and Petterson is centering Tanner Pearson and Jake Virtanen. Adam Gaudette has managed to stick in the league where college running mate Dylan Sikura has not, and he’s centering Brandon Sutter and the spiritual successor to Alex Burrows, Ratatouille himself Antoine Roussel. And finally Jabe Eagle and Loui Eriksson are an expensive fourth line reminder of Benning’s past roster and salary cap crimes.

In net Jakob Markstrom will get the call again tonight, as he’s gotten the bulk of the time this year as Thatcher Demko still remains the heir apparent. Markstrom has made what was seemingly an obvious choice to let him walk after this season slightly more difficult by putting up a completely respectable .922 at evens and .915 overall, but in all likelihood the plan is still to give Demko the crease next year forward, as trusting goalie numbers in a contract year is a fool’s errand, even if this is Jim Benning being discussed here.

As for the Men of Four Feathers, if there was any doubt prior to last night that Jeremy Colliton is one of the worst coaches in the league, if not the outright worst, losing handily to Edmonton without Connor McDavid shows just how wide the gulf is between Coach Kelvin Gemstone and a competent coach like Dave Tippett, who was coaching with one arm tied behind his back. It takes a truly galaxy brained imbecile to not only scratch Dylan Strome in favor of Alex Nylander, but also to look at what the power play in Winnipeg did on Sunday evening and think to himself “This needs more Zack Smith”. Furthermore, Alpo Colliton kept Erik Gutafsson on the first unit even after how disorganized it had been under his stewardship with Adam Boqvist back in the lineup. Even if this isn’t freelancing and all of these choices are cleared through Bowman and MacIsaac, they should all be fired. There is no coach getting less from more in the league than Jeremy Bevington, and after all the bullshit they fed everyone just before the break with that winning streak, if the Florida game is counted, the Hawks are now 1-3-2 since, with that lone win coming in a shootout. And has it been mentioned enough that regulation wins are the first tiebreaker now this year?

With no skate today it’s unclear what other strokes of geniusness Vinny Del Colliton will cook up tonight, with the only sure thing being that Corey Crawford will get the cage at the tail end of the back to back. Who knows, maybe Alex DeBrincat will get scratched now and Slater Koekkoek will run the point on the advantage.

The Hawks started this five game road trip needing likely 3 regulation wins to keep themselves in the conversation, and now two games into it, they have to now get three in a row. For those counting at home, that’s BAD MATH. And with the crowd tonight likely baying for blood reminiscing of a rivalry long since dead and decided, it seems unlikely they’ll find the start of that winning streak here, particularly with the coaching decisions that are being trotted out. The main hope is that there can at least be closer to what was supposed to be a season-defining trip, and the sell off can begin, and the heads can (hopefully) roll. Let’s go Hawks?