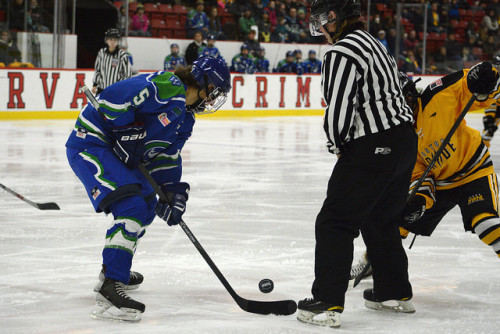 In which I regularly-ish sum up this past weekend in women’s hockey.

For the second week in a row, Buffalo managed to drag a game kicking and screaming into overtime only to drop it there. The Beauts outshot the Riveters 47-32, counting overtime play, but Fujimoto wasn’t having any of that nonsense, and New York took the win on shootout goals from Ammerman and Dosdall. The end result may have been good for New York, but they can’t go on playing catchup like this; they’re going to have to learn to produce a lot more consistently, something that’s been a rare sight from them this season. Come fall, with Boston College scoring juggernauts Carpenter and Skarupa in their lineup, the Riveters’ scoresheets may start to look very different.

The Pride edged ahead of the Whale for first place this weekend, beating them decisively 4-2. The Whale are still noticeably slipping; losing 3 of the last 4 doesn’t sound so bad, but it feels like a much bigger deal in a 18-game season. Connecticut got a measly twelve shots on Boston’s goal, and took five penalties of which they only killed four. The Whale have always been penalty-heavy, but until now they’ve been able to compensate with a strong penalty kill and plenty of scoring firepower. With the scoring dropping off, they need to either pick their offense back up or clean up their play if they want to take back first place.

The NWHL has two weeks of regular season play left until the playoffs. Boston and Connecticut are one point apart for first and second place; Buffalo and New York are two points apart for third and fourth.

Right on the verge of clinching first place in the league, the Canadiennes stumbled a bit and split this weekend’s series against Calgary. The teams turned out similar shooting numbers in both games; it was goaltending that made the difference between nights. Montreal’s Charline Labonte stopped only 27 of 31 on Saturday, but on Sunday she stopped 34/35 for the win and the first place clincher.

Brampton got ahead early in this one, leading the shooting for the first two periods and going into the third with a 3-1 lead. However, the Thunder took five penalties in the third and the Furies were able to capitalize twice, sending the game into overtime tied 3-3. with Toronto still on the power play. They couldn’t quite complete the comeback, though–after only a few seconds Vint got the shorthanded game-winner for Brampton.

The CWHL has one week of regular season play left with Montreal securely in first. Brampton and Calgary are one point apart, and will be playing each other next weekend for second and third places. Toronto trails far behind in fourth. Boston still has no regulation wins.

No word yet on whether the Minnesota Whitecaps will end up being folded into the NWHL. In the meantime, they finished up their exhibition season this weekend against Shattuck-St. Mary’s. The Whitecaps nearly made it through the game with a 2-1 lead, but the Sabres scored back-to-back goals late in the 3rd that Minnesota couldn’t answer. The 3-2 loss left the Whitecaps with a 6-6 record for the season.