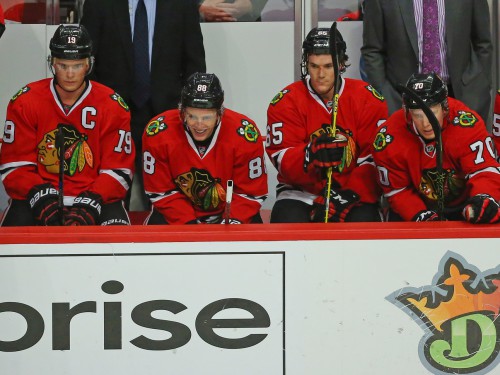 They didn’t even have to play this game.

Jammy, annoying Matt Duchene goal followed by his rich kid punchable face smile. Another Avs goal from some jamoke that isn’t on their top line or top pairing, this time Zach Redmond (but it could have been Holden or Guenin or Skille or Mitchell or anyone else, it really doesn’t matter). The only variable is whether the Hawks would toss a ton of shots at Varlamov or just a bunch. Not that it matters, because we already know he’s going to stop them all. In the meantime the Avs top players will basically run wild over an either uninterested or ill-equipped or both Hawks team.

And so it went. It’s hard to think of another matchup that feels quite as scripted as this one. Anyway, to it… 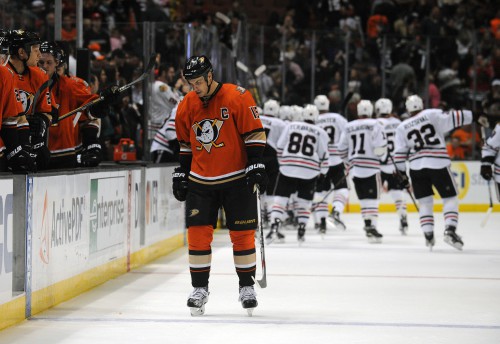 I made a TLC reference on Twitter earlier, so I figure I might as well throw En Vogue in now. I want to stay on message, after all.

It wasn’t vintage stuff from the Hawks. They were rolled in the 1st and didn’t even look all that threatening in most of the last two periods except for the odd shift from Kaner and The Sons Of Rasputin. What this afternoon did show is that the Ducks remain the Ducks, and no matter how good they might look for a stretch (and I’m sure some Ducks observers would say the first 50 minutes is about as good as they’ve looked all season), they’re still just good enough to fuck it up.

The Ducks had it under control, even with Crawford pulled. There was utterly no reason for Ryan “White Hats Are Still Cool To Me” Getzlaf to take that penalty against Shaw, other than he isn’t allowed to light his own farts on the ice. While the Ducks have the best kill in the league at the moment, you’re asking for it to give the Hawks a look on a two-man advantage to get back in the game. There’s no reason for it. And once the Hawks got it to 2-1, did you really doubt the Ducks would run around their own zone like a kindergarten game of football and the Hawks would find the equalizer? No, of course you didn’t.

You really couldn’t ask for a more clear illustration about the difference between these two teams. One will just find a way to insert thumb in its ass. The other still knows how to get it done when they need to.