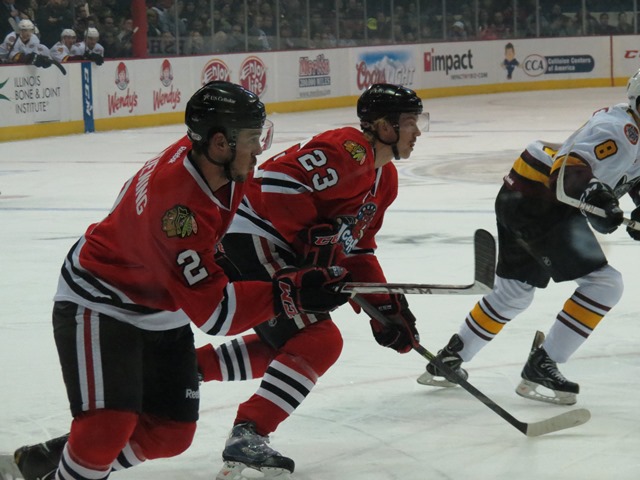 The IceHogs made their way down to Charlotte, North Carolina again for another 2 game set against the Checkers during week 10 of the AHL schedule.

On Thursday, December 5th, the IceHogs fell 3-2 in overtime to the Checkers, despite the Hogs jumping out to a 2-0 lead in the 1st period on goals from Kyle Beach and Mark McNeill. Zach Boychuk tallied twice in the contest for Charlotte—once in the 1st and once in the 3rd—to tie the game up at 2. Brody Sutter scored the game winning goal in overtime for the home squad.

-Rockford didn’t convert on any of their 4 man advantages while the Checkers tallied on 1 of their 2 power plays.

–Mark McNeill led the IceHogs has he registered 6 shots on goal.

-Defenseman Michael Kostka made his IceHogs debut as he was assigned to Rockford for a conditioning stint. He wore Jimmy Hayes’ old no. 17.

Saturday’s contest against Charlotte had a better outcome for the visitors than the previous game did. The 1st period came to a close with the Hogs and Checkers knotted up at 1 on goals from Garret Ross and Brendan Woods respectively. Brad Winchester, Joakim Nordstrom and Ross all tallied in the 2nd period for Rockford to give the Hogs a 4-1 lead. Mark Flood recorded his 8th tally of the season with less than a second to go in the sandwich stanza to bring Charlotte within 2 goals. IceHogs defenseman Klas Dahlbeck restored the Hogs’ 3 goal lead with a shorthanded, empty net goal with 15 seconds remaining in regulation, but the final was 5-3 as AJ Jenks scored with 9 seconds left for Charlotte.

-Charlotte outshot Rockford 33-27. Kent Simpson got the start in net again for Rockford. Mike Murphy was between the pipes for Charlotte.

-The IceHogs went 1-for-4 on the power play and the Checkers went 2-for-5 on the man advantage.

–Garret Ross and Brandon Pirri both fired 4 shots on goal for Rockford.

–Joakim Nordstrom was +4 for the IceHogs on Saturday night. Klas Dahlbeck, Michael Kostka and Brandon Pirri were all +3.

–Michael Kostka picked up his 1st point in an IceHogs sweater with his primary helper on Klas Dahlbeck’s goal in the 3rd period.

–Phillip Danault was injured on Thursday night and did not play on Saturday night for Rockford.

–Friday, December 6 – The Blackhawks traded winger Kyle Beach to the New York Rangers for forward Brandon Mashinter, who was reassigned to Rockford. The Blackhawks also reassigned Joakim Nordstrom to the IceHogs.

-To be honest, I don’t have any observations this week. I didn’t see the Thursday game in Charlotte and I watched Saturday’s game online through AHL Live, but nothing besides the usual was going on for Rockford. Klas Dahlbeck continues to be solid on the blue line. Garret Ross had a good game on Saturday. Brandon Pirri looked like his usual self, at least on Saturday. It’s kind of unfortunate for Rockford—at least at the moment—that Kyle Beach was traded because he had 4 goals in the past 2 games and was playing well. But otherwise, not a whole to report back, y’all.