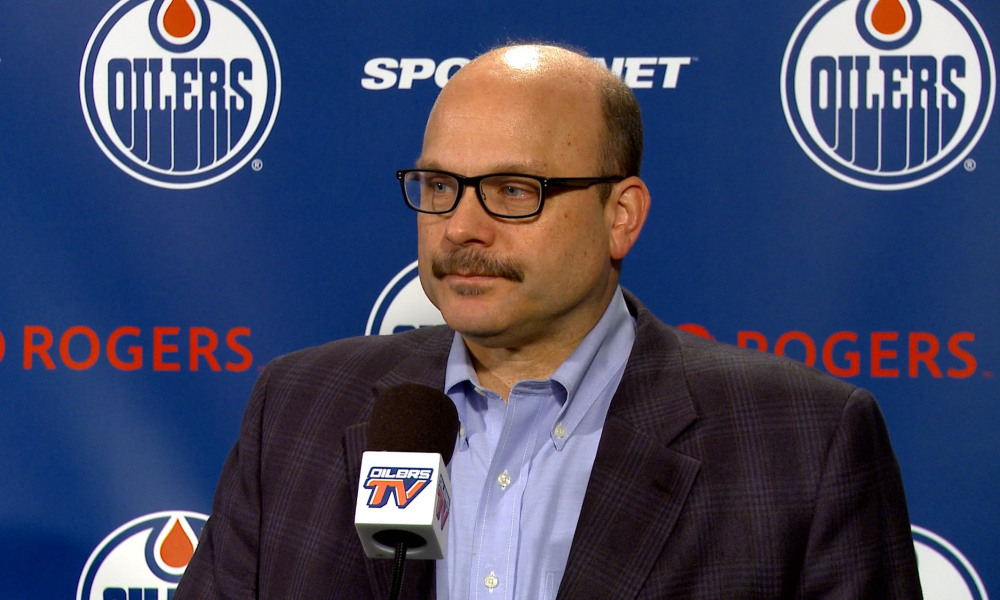 If you’re a fan of the podcast, and we know some of you are even though you can’t publicly admit it for fear of  being ostracized/culled from society, you probably know that because hockey is so weird and silly we simply rate GMs and coaches by a simple, binary Moron/Not A Moron system. It’s clearly folly to try and rank them, or make anyone a genius, or make anyone a total, blithering idiot (though they might all be) because there’s so much luck involved, so much is pinned on the goalie they have or don’t have, and the cap system is just so punishing.

But because we’re running out the clock here until August when we go to figurative cottage, and mostly the free agency period has shaken out, perhaps it’s finally time to go through all the GMs and coaches and give our definitive Moron/Not A Moron say-so. So today we start with the Western Conference GMs.

Stan Bowman – Not A Moron

Hometown bias sure, and recent seasons are pushing him toward the threshold a bit, but this is still a guy who boasts three rings (even if it’s with a core that isn’t his). He can still claim to be a good drafter, as even on the current team Schmaltz, Saad and DeBrincat are not only on the roster but major contributors, Jokiharju could be, Forsling (yes, a trade) still has hope, and departed players like Danault, Teuvo, and Johns are genuine NHL contributors. It might not be enough to save his job past this season, but he at least does one or two things well enough that he can cross the barrier.

Joe Sakic – Quite Possibly Not A Moron

Two years ago we would have said he’s definitely a moron. But then he launched Patrick Roy, and there appeared to be a plan in place for the first time. He got a decent haul for Matt Duchene, who might not be anything more than a really good #2 center or #1 left-wing, as Girard and Kamenev are very promising. He’s drafted MacKinnon, Jost, and Rantanen, though the rest of his drafts are shaky at best. The Grubauer trade looks to be all right. I’m going to leave him in the middle for now and see how this season goes.

He wins every offseason, and the Stars have made the playoffs twice in six seasons. Sure, he was able to fleece the Bruins out of Tyler Seguin. Even the sun shines on a dog’s ass once a day. He’s utterly borked their goaltending for years. And Ben Bishop is no answer either. His drafts have produced Nichushkin, who fucked off for a couple seasons, and Julius Honka. He had a Karlsson trade and ruined it by telling everyone how much he was getting one over the Senators. He handed that contract to Martin Hanzal who has all the mobility of the DMV. This team has been one line and a comedy act for like four seasons. What was your favorite part of the second Ken Hitchcock era?

We don’t know yet, but he’s been handed an expensive mess by his predecessor Chuck Fletcher, who was definitely a moron as he’s trotted out Mikko Koivu as a #2 center for at least five years too long. All he’s really done is hand Matthew Dumba a kind-of-ok contract.

David Poile – Not A Moron, But Ignorantly Evil

He’s been around so long he has enough on the ledger to erase a first-rounder for Paul Fucking Gaustad. He’s assembled a couple different competitive Predators teams, and yet he’s still the same guy who re-signed and championed Mike Ribeiro and now has Zac Rinaldo there. Wait to see what he does with Austin Watson if you really want to see what he’s about.  The Turris trade isn’t good but there are enough picks and trades here that you have to say he’s Not A Moron. Getting Subban almost puts him there alone. That contract to Ryan Johansen is going to look Python-esque soon enough, and this team still doesn’t really have top line talent other than Forsberg, but the record is the record.

The thing is with Armstrong, most of his moves I agree with when they happen. He held on to Ken Hitchcock too long, and the whole transition to Mike Yeo was mangled like a banana republic, and yet there’s plenty of talent here. But the insistence on shoving Jake Allen onto the Blues like he’s Roman Reigns even though he’s never proven he can carry anything, and the sticking with a blue line that is too slow and too ham-handed always limits where they can go. And this is the Blues after all.

Kevin Chevyldayoff – Not A Moron

We would have said Moron until this year, but look at this team and he finally had Hellebuyck come through to save it all. The drafting record is pretty solid, and we’ll see how he handles the cap hell that’s coming, but there are just too many good players here to label him anything else.

Bob Murray – I Can’t Believe He’s Not A Moron

I still see his face in my nightmares when he was announcing the Jeremy Roenick trade, and his tenure in Chicago will always cause me to make a face like I just smelled a hot spring. And the bile I carry for the Ducks didn’t help. And yet the Ducks have made the playoffs eight of the ten years he’s been there. The Kesler contract is utterly hilarious, of course. And yet he’s brought in a raft of good, young players over the years. While Getzlaf and especially Perry are turning odd colors in the sun, they finished second in an admittedly woeful division next year before falling flat on their face. He’s close, and it’s all about to fall apart you hope, but the record is what it is.

He’s a computer boy, and I want to root for him, but at some point don’t the Coyotes have to actually matter? The Domi-for-Galchenyuk trade is great if they can get the ladder to pick his head up. Getting actual pieces for just taking Hossa’s contract is smart. But this team always sucks. And it has Rick Tocchet as coach. And for all the high draft picks they’ve boasted, where’s the guy you’re getting really excited about? Clayton Keller and whichever Strome they have? That’s not enough considering how long they’ve been in the shitter. If you’re going to be Hockey Billy Beane you eventually have to be good.

He traded Dougie Hamilton, probably one of the five best d-men on the planet, because he liked to go to museums. I don’t think I have to say much more.

The trade is one-for-one…

To be fair, there isn’t much of a track record on him yet, as he’s only had one season at the helm. But we can tell where he’s going, and handing a bunch of money to 35-year-old Ilya Kovalchuk is not a good start. He also traded for Dion Phaneuf, who was never good and the only reason anyone thought he was is because he’s got “HOCKEY FACE” and his wife is hot and Canadian as well. That goes miles with Canadian media. If any player had married Shania Twain or Nelly Furtado they would have won six consecutive Hart Trophies, no questions asked.

Doug Wilson – Not A Moron, And Handsome!

The Sharks are always there, and though they’re old and kind of just there now they’re still there. Sure, he changes all the names of their prospects to something ridiculous just like the St. Louis Cardinals do, but even though all their good players are over 30 they’re still somehow the favorite in the Pacific. They’ll probably never win it, and they’ve basically existed to play the losing foil to a better team, but you go this long and remain around the fringes you’re doing something right.

No need to go any further here.

George McPhee – Sadly, Not A Moron

This is still a guy who punched an opposing coach over a preseason game, which in any other sport would see you banished for life. In hockey it gets you a beer from Steve Simmons or something. While the luck was overflowing with the Knights last year, this is still a guy who caught onto a trend most of his colleagues haven’t and packed the team with speed and told them to play a system that got it the fuck up there. He also didn’t go all-in and mortgage the future on what is a team that will probably take a few years to get back where it was, and the Stastny contract is fine. He also has the Caps years to his credit, though they always fell short and his handling of coaches was beautifully idiotic. He’s not going to get 40 goals from Wild Bill Again, and the Fleury contract will not only bite him in the ass but devour it entirely soon. But they have so much cap space they can probably get away with it. We’ll come back to this when more of his draft picks and signings are on the docket.

Tags: everyone's a moron moron or not a moron NHL GMs